A rising and increasingly confident chorus of childless/free voices has been asserting itself in the blogosphere and in the media over the last few years.

Now there's a new study that provides some hard data and insights about us as a group. "Shades of Otherhood: Marketing to women without children" was produced by DeVries Global Public Relations and inspired by the work of Melanie Notkin, founder of Savvy Auntie and author of the recently published book Otherhood (which I reviewed here)

As many of us have long suspected, the study proves that we're a large, growing and formidable market segment that's been pretty much ignored -- until now.  But the tide is turning!

The study starts by trotting out that old clichéd image of childless women = "Sex and the City" -- but goes on to acknowledge that "the Otherhood looks relatively little like the stereotypes that have reigned in popular culture,"  and adds that "Regardless of the reason (or reasons)[i.e., that women don't have children], marketers and brands—who have traditionally been more mom-focused—should be paying attention to this growing block of consumers... Our study revealed she is a with-it and wise woman who has enormous untapped potential as a consumer and influencer." (Wow, does it ever feel good to read that!!)


"Notkin refers to what she calls "a collective case of mom-opia – the myopia of seeing the world through mother-colored glasses, seeing motherhood as the only the only normal, natural way to be." From magazine covers featuring the next Hollywood baby bump to a vast number of advertising campaigns targeted to moms and families, other women are often left out. Now it’s time for the conversation to follow where the demographics are trending: women fall into more than the two narrow categories of wife and mother."

If we're not mothers, then who are we?
The study goes on to offer tips and suggestions for marketers who want to reach the Otherhood -- including this cautionary note:


"Brands and marketers... may mistakenly use the mom archetype as an aspirational model for non-moms, ignoring the reality that parenthood, either by choice or circumstance, isn’t a reality for many women these days. There’s an opening here to celebrate the many wonderful things in her life, even if those don’t include children of her own."

That's just a brief summary of the study's main points. I encourage you to read the whole thing. And then tell me -- what do you think? Do you agree with the findings and observations? Was there anything that surprised you?
Posted by loribeth at 9:37 PM 3 comments:

"All Joy and No Fun" by Jennifer Senior 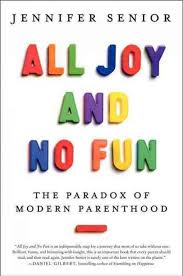 Although I am not a parent (in the active sense, anyway), I am fascinated by parenting issues, and by how different childhood & parenting seem today from what I remember of my own experiences growing up. Today's style of intensive, "helicopter" parenting sometimes makes me wonder whether I could have cut it as a mom. (And sometimes makes me very glad that I don't have kids, if this is what it takes these days to pass as an acceptable parent.)

I've always found it interesting how parents could be screaming at their children & complaining about them in one breath, and then in the next ask when *I* was going to have kids and tell me how wonderful they were.  Gee, you're a walking advertisement. ;)

This paradox is reflected in the title and explored in the pages of Jennifer Senior's new book, "All Joy and No Fun: The Paradox of Modern Parenthood."  This is not so much a how-to manual or advice guide as a study of the challenges of modern parenthood, how those challenges are different from what parents of the past faced, and the impact of parenting on parents themselves. There is a nice balance of academic research (presented in a highly accessible way) and chats with/observations of real-life parents and kids.

Senior sets out and explores three reasons why modern parenting has become such a complicated affair:
Most of the book deals with the challenges of modern parenting. It isn't until the final chapter that Senior looks at the joy part of her equation.  She delves into the concepts of "the experiencing self" versus "the remembering self" -- which explains to some extent why, as I mentioned earlier, a parent can be screaming at their child in one breath and then a short time later rhapsodizing about the wonders of parenthood and encouraging you to join the club. Senior does acknowledge (albeit briefly) that children are not the only things that can invest a life with joy, meaning and purpose, which I appreciated as a childless-not-by-first-choice woman.

If you're a parent, you will likely find this book a source of validation and insight into your role. On the flip side, one review I read said that if you're on the fence about becoming a parent & read this book, you'll probably run away screaming. ;) (Or words to that effect.) I'm not sure about that -- we all know that parenting is hard. This book may not give you any firm answers as to whether you should take the plunge... but it sure raises some interesting questions. I enjoyed it!

Saying goodbye to "How I Met Your Mother" 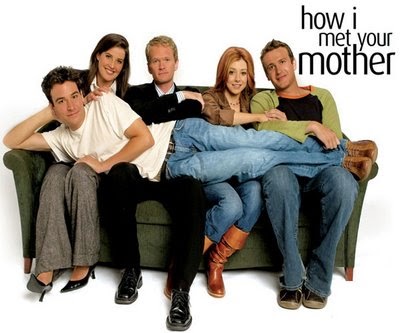 Did anyone else watch the series finale of "How I Met Your Mother" last night? What did you think?

Overall, I was disappointed -- although it had its moments. I liked the points it made about the ebb and flow of friendship and how life changes -- HAS to change -- as you and your friends marry and have kids, focus on careers, and move further away from each other. But that you can still show up for the big moments and remember why you all loved being together so much. : )

But there was that ending...!

Like many, I found myself yelling at the TV set when I realized that we had just spent nine years building up to Ted FINALLY meeting The Mother -- only to kill her off within minutes and have Ted wind up with Robin -- again!!  I know some people felt that Ted & Robin belonged together & should somehow end up that way. And while the two did have chemistry, so did Ted & The Mother. But it all just seemed too pat, too contrary to where the plot had been leading us. (Although I will admit -- I did love it when Ted produced the blue French horn at the very end.)

And I was disappointed as a childless woman, too. Robin was one of the few childfree-by-choice female characters on television; the episode dealing with her subsequent discovery that she could not have children even if she did want them was so well done (for the most part) that I wound up writing two posts about it (here and here).

Last night, I felt a pang of recognition as Robin ranted to a very pregnant (for the third time!) Lily about why she found it hard to be around her friends: "The gang is a married couple who I never see anymore about to have a third kid, it’s my ex-husband hitting on slutty cops right in front of me and it’s the guy I probably should have ended up with with the beautiful mother of his child."  Even if she didn't want kids, she was feeling unloved and lonely and left out as her friends paired off, started families and turned their attention elsewhere. I think many of us in the ALI community, who have watched as friends effortlessly popped out one kid after another & then gradually drifted away, could relate.

Robin could never be a mother (biologically, anyway) -- let alone THE Mother (and we knew that, since Future Ted & the kids referred to her as "Aunt Robin" throughout the series).  But, as I noted in my original post about the Robin/infertility episode, referring to viewer comments I read about the episode:


I got a rueful chuckle out of how many were trying to figure out how Robin might wind up being a mother after all, even if she doesn't have biological kids (adoption? stepkids?)(She just HAS to be a MOM!!! Somehow!!! Right???)

Well, knock me over with a feather -- in the end, she did wind up as the stepmother to Ted's kids. We just can't have a woman on TV, especially the series' main love interest, go completely without children all her life, now, can we??!

Not only that, but Barney (of all people!!), winds up with a baby as well.  And while the scene was nicely played (I adore Neil Patrick Harris), and it was nice to see Barney finally become the guy we knew he could be (having seen glimpses of that guy when he was with Robin) -- the idea that Barney could only truly grow up and be redeemed through fatherhood -- that a baby is the ultimate answer to every problem -- is deeply disappointing. (Although, as one commenter I read pointed out, it was kind of funny -- karmic justice of sorts -- that the supreme womanizer wound up, not just as a doting dad but the doting dad of a baby GIRL.)

Did you watch? What did you think? Do you agree or disagree with anything I've written above?
Posted by loribeth at 9:00 PM 8 comments: