Recently, someone posted a link to a New York Times article about "The Decline of the Online Message Board." That prompted a discussion on our Promp-ly writing group around the question of whether message boards were still relevant & who still frequents them.

It was, as I noted on the group (which, ironically, is really a message board itself) a timely discussion for me. Blogs weren't around when I was going through ttc, stillbirth and infertility treatment -- but listservs and message boards were, and they were (and remain) an enormous source of support for me.

Ten years ago today, on July 18, 2001, I made my very first post on an iVillage Childless Living message board, for women who were childless not by choice. I had been lurking on the board for several days & while I hadn't had much experience with message boards, I decided to take a leap of faith, put myself out there publicly and join in the conversation. Not only was this one of the first message boards I had ever posted on, period, but -- after a long struggle with stillbirth and infertility treatment -- I was, essentially, admitting to myself and to the cybersphere that our ttc journey truly had come to an end, that we were not going to have children after all.

I've written about the board and what it's meant to me before -- most notably here, two years ago, and here, three years ago, when the board finally (sadly) disappeared from the cyberspace. Some people have drifted away over the years, for whatever reasons, but I'm still in touch with half a dozen of those women, on another (private) message board we set up, and on Facebook, and I've met two of them "in real life."

Admittedly, we don't post as often as we once did and, as time has blunted the sharp edges of grief, we write less and less often about childless living specifically. But on the days when an "anniversary" has us feeling emotional, when someone lobs an unkind or unthinking comment about our childlessness that cuts one of us to the bone, when something happens to remind us about the life we thought we'd once have and the experiences we are missing out on, we come to the board to vent our hurt and frustrations, and to give each other the cyberhugs and support that we can only get from each other -- from other women who have been there, done that, and truly understand what it's like to walk a mile or 10 in our shoes.

I simply couldn't let this milestone day go by without paying tribute once again to the board that brought me together with these women, and to the huge role they have played in my life these last 10 years. I can't imagine how I would have gotten through it all without them.
Posted by loribeth at 5:00 PM 9 comments:

When we visited Katie at the cemetery recently, we noticed that someone had placed a single red rose in her niche vase.
There was one other niche that also had a similar rose in it, & we are thinking that perhaps it was someone from that family who did it. Perhaps they have visited before, and were touched to realize that the niche near their loved ones was for a baby.
Whoever that kind soul(s) is (are), dh & I thank them. Sometimes it's sad knowing we are the only ones who visit Katie in the cemetery. I know FIL did a few times shortly after our loss, but that was a long time ago now... and I know that some of our support group friends whose children are buried nearby have also visited in the past, but most of them don't visit their own children very often (let alone our daughter).

I don't discount Notkin's grief over not having children, for whatever reason. But it bothers me when people who may or may not be truly infertile try to co-opt the term. It reminded me of the woman on my pregnancy loss e-mail list who once wrote about how she had "struggled with infertility." I think she went something like five cycles post-loss before she got pregnant. (She had had several losses but went on to have two or three living children.) I know waiting for a subsequent pregnancy can seem like an eternity, but give me a break. :p

Beyond the marketing spin, though, I do appreciate the voice & profile she's given to all of us CNBC-ers (childless not by choice) through Savvy Auntie -- and, terminology aside, I really did like the article. I especially liked this part:

"...the assumption is that all women who don't have children don't want children. There is a place between motherhood and choosing not to be a mother. And tens of millions of American women are there."

Dh & I were doing our usual Saturday stuff last weekend, & I was just getting into the shower after doing the housecleaning when the phone rang. When I emerged, dh came upstairs with a stunned expression on his face & told me his uncle -- the husband of his mother's youngest sister -- had died a few hours earlier of a massive heart attack. He was 70 -- not exactly young, but not really old either (same age as my mother) & in good health. He was a realtor, who helped us buy our house 21 years ago, as well as our home & auto insurance agent, & looked after us well. He had two daughters, three grandsons & a granddaughter (all between the ages of about 4 & 13).

So we abandoned our plans & drove up to the house. (Not that there was anything we could do, but we didn't want to be the only ones NOT to show up.) Dh's aunt was a mess, understandably. She kept repeating, "How could everything change so fast?" She talked and talked. She told and retold the story of what had happened. And everyone kept trying to get her to stop talking about it, to calm down.

Dh & I may not have lost a spouse (& the good Lord willing, we won't know what that's like for many years), but we do know a little something about grief and loss, and about how quickly life can change. Dh took his cousin aside & emphasized to her how important it was to let her mother talk about what happened, to let her tell the story over & over again if she wanted to, to listen.

I don't know if he made an impression. But it felt like something we could do, some way we could contribute and help in a meaningful way.

I reviewed Ted Kennedy's memoir before I actually finished reading it. Toward the end of the book, writing about a period when he had lost several more loved ones, including his nephew, John F. Kennedy Jr., there is a lengthy excerpt of a speech he gave at a congressional prayer breakfast in which he spoke about his faith and how it had helped his family overcome one tragic loss after another. He also tells this story:

In 1958, my father wrote a letter to a friend whose son had died. Fourteen years earlier, my oldest brother Joe had been killed in World War II. Ten years earlier, my oldest sister Kathleen had been killed in an airplane crash in Europe. My father wrote to his grieving friend, "There are no words to dispel your feelings at this time, and there is no time that will ever dispel them. Nor is it any easier the second time than it was the first. And yet, I cannot share your grief, because no one could share mine. When one of your children goes out of your life, you think of what he might have done with a few more years, and you wonder what you are going to do with the rest of yours. Then one day, because there is a world to be lived in, you find yourself a part of it again, trying to accomplish something -- something that he did not have time enough to do. And, perhaps, that is the reason for all of it. I hope so."

I wish that life were simpler. I wish that loved ones didn't have to die too young. I wish that tragedy never haunted a single soul. But to wish all that is to ask for an end to our humanity. God, family and country sustain us all. 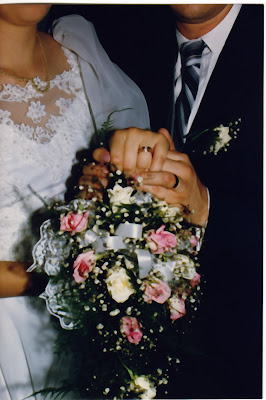 Even though 26 years isn't one of those special numbers that's divisible by 5, it's still a special day -- because 26 years ago today, I married my dh. : )

It hasn't all been a fairytale (whose marriage is?)(& when you think about it, fairy tales usually included a lot of dark stuff before they got to the "happily ever after" part) but there is no one else with whom I'd rather have spent the last 26 years -- or the next 26 and beyond, for that matter. : )

Happy anniversary to us! : )

...politicians, including both the Democratic and Republican members of Congress who brought up their offspring during last week’s fiscal wrangling, are also sending the message that they can be trusted to whittle down the debt, shore up the country and otherwise safeguard the future precisely because they have a direct biological stake in it. If they breed, they lead, or so their self-promotion holds.

How many children someone has says nothing about how well he or she will govern, and the tableaux of family bliss that candidates choreograph regularly prove to be
fictions.