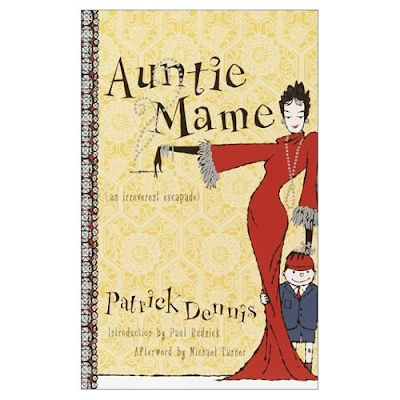 I'm not sure what got me thinking about "Auntie Mame" the other day.  I found myself mentally going through a list of strong childless/free women -- and suddenly Mame appeared at the top of the staircase in my mind, cigarette holder in one hand & martini glass in the other.

I can't remember whether I read the 1955 novel by Patrick Dennis first or saw the movie musical with Lucille Ball as Mame (and Bea Arthur -- Maude, as we knew her then -- hilarious as her best buddy, the perpetually hungover actress Vera Charles). (I do remember that I was about 13 & going into Grade 8 -- we had recently moved to a new town, and that was one of the first movies my mother, sister & I went to see in a rickety old theatre on the main street, which burned down shortly afterward).  I later saw the Rosalind Russell non-musical movie from 1958, as well as the musical onstage in a local summer theatre production.

The story of "Auntie Mame" begins as Mame's recently orphaned young nephew, Patrick, arrives at her Manhattan townhouse in the middle of a wild party -- this being the 1920s era of flappers, bathtub gin, speakeasies and the like. The freespirited Mame is completely unprepared for the responsibility of bringing up a child, and has some highly unconventional ideas about how to do it -- but of course, he turns out just fine in the end and makes her very proud.

I loved Mame in all her incarnations -- and most especially the lesser-known sequel to the book, "Around the World with Auntie Mame," which I discovered in the library when I was in junior high and read over & over & over again. Mame takes her nephew Patrick on a tour of Europe prior to sending him off to college, and each chapter details a new adventure in a different country.  I haven't read the book in at least 30 years (although I bought a copy a few years ago through Amazon), and I'm sure parts of it would be considered highly politically incorrect these days -- but I just remember it as screamingly funny, and wondered why nobody had ever made a movie out of it, too.

Now, I am nothing like Mame -- I'm far too conventional -- but I do adore my two nephews.  And you have to love someone whose motto is "Life is a banquet, and most poor suckers are starving to death." Sometimes, I think we need to be reminded of that -- both about how fortunate we are, compared to so many others out there, and about the banquet of experiences out there, just waiting to be sampled. What are we waiting for?
Posted by loribeth at 9:59 PM 10 comments:

I survived (and other post-anniversary musings)

(I've been wracking my brains for some eloquent, pithy, insightful words I could post today. And this is all I could come up with. Sorry.) 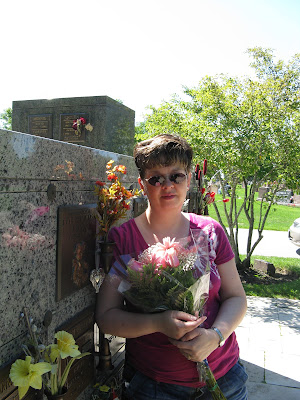 Teenagers in the 'hood

It was pretty quiet in the neighbourhood when I was home sick last week. But around
noon that day, I was upstairs, & I could hear voices/laughter. It seemed to be coming from nearby, but I couldn't see anyone when I looked out the window (although some of the view is blocked by our garage & the neighbours' garages).

I came downstairs to get some lunch & was in the kitchen -- and all of a sudden, I saw a young boy (about 14 -- someone I've seen occasionally hanging around with the Little Girl Next Door) jumping over the split-rail fence that separates our yard from the next-door neighbours', & running across my front yard, down our driveway and down the street, looking over his shoulder at one point.

I thought, "OK, NOW what?? What has he been up to?" I opened the front door a crack -- & there were two or three other young guys, standing on LGND's doorstep.

I quietly closed the door again. And tried not to laugh. (Too much.) I didn't see LGND, but I am thinking she was either there & had been talking to them, through a crack in the door or through the front window, or they were just knocking on the door to see if she was home.

LGND, as I've written before, is six months younger than Katie would have been -- i.e., 13 years old.

The other night, I had brought some work home with me and was upstairs in our "office," when again, I heard a lot of giggling, squealing & "Nooooo!"s. I looked out the window & saw LGND and her gaggle of girlfriends, standing out front, cellphones glowing in the twilight.

Today, I was at the kitchen sink, and a boy came riding his bike down the sidewalk, peering intently at our house as he passed.  I wondered why he was so interested in our house. Then I recognized him -- it was the same boy from last week. He wasn't looking at our house, he was looking at LGND's -- probably trying to ascertain if she was home or catch a glimpse of her.

When I told dh, he rolled his eyes & muttered a few choice words about how LGND was way too young for this kind of thing, etc. etc.  LGND used to adore him (as most little girls do);  these days, of course, she's usually with one of her friends or absorbed in pecking at her cellphone, so we're lucky to get a perfunctory wave as we pass each other coming and going.

Having been a teenaged girl once myself, I think he's being rather harsh... of course, he insists that Katie would NEVER have been like THAT. Yeah, right... ;  )
Posted by loribeth at 7:40 PM 5 comments:

As I noted briefly in my last post, author Maeve Binchy -- a favourite of mine -- passed away recently. I hadn't known, until reading her obituary, that she was childless, and the knowledge made me feel even more warmly about the lady and her writing, if that was possible.

Wouldn't you know, with Binchy barely cold in the ground, some so-called writer -- I can't even think of a descriptor that adequately reflects my feelings --  decided this was the perfect time to muse on the topic of "If Maeve Binchy had been a mother" -- posing the question, "Does a female novelist need to have experienced motherhood to truly understand human emotions?" -- & concluding that perhaps the answer is yes.

Cue the sound of my head exploding. :p  I was already in a funk this weekend (you all understand why), & reading CRAP like this...!! And about Maeve Binchy, of all people, whose books are renowned, even by the most hard-bitten critics, for their wit, humour and insight into the human heart.

Notkin notes that Binchy's lack of children was not a choice, and links to a 2008 article in which Binchy wrote about her childlessness and the warm relationships she has enjoyed with others' children and grandchildren.

"I bless those good friends and family who lent us their children..." Binchy wrote. "Our many 'children' and 'grandchildren' will never really understand what a great role they played in filling a gap that could have been sad and destructive but in the end turned out be so joyful... I hope that they knew we loved their company. And if they didn't know, they do now."

"There is no question that the experience of motherhood adds to the wealth of experiences an author has to glean from," Notkin acknowledges, but then adds, "But the pain of being unable to become a mother and the joy of selflessly loving nieces and nephews and other children not-ones-own are also deep, rich experiences from which an author can be inspired."

Thank you, Melanie. And thank you, Maeve Binchy. It;s been awhile since I read one of her books, but I think it's time to dig out my copy of "Light a Penny Candle" or "Firefly Summer" & savour the words of a master author -- a great human being -- and a fellow CNBCer -- once more.