I don't know where the time goes... the last few days & hours of 2012 have absolutely zoomed by. So many plans, so many good intentions... so many blogs to read & posts rumbling around in my head, so little time...!  My Google Reader is hopelessly stuck above 1000 posts, it seems (not all ALI-related, happily). I manage to read a blog post here & there but meaningful chunks have eluded me for the past month. :p

The Christmas season flew by too. I missed out on a few of the things I usually like to do at Christmastime... only caught snatches of "It's a Wonderful Life" and "A Christmas Carol," and didn't see "National Lampoon's Christmas Vacation," "A Christmas Story" or "The Bishop's Wife" at ALL. :(  But there were compensations. ;)

Dh's Christmas party was on a Thursday night (the most common party night on Bay Street in Toronto), at a restaurant far from downtown, let alone where we live in the suburbs.  Last year's party was at the same place and he didn't get home until midnight (and then had to get up at 5 a.m. as usual for work the next day :p) -- so this year, we spluged for a night at a swanky old downtown hotel... we brought a bag to work with us, checked in at lunchtime (& headed back to work), then he went to his party while I went to the Eaton Centre to shop, eat and admire the holiday decorations, there and all through the underground concourse.  Stopped off at a Starbucks en route back to our room & enjoyed a caramel brule latte while watching our favourite Thursday night shows & waiting for dh's return. While I find I never sleep as well as when I'm in my own bed, we did get to sleep an hour longer than we normally do, & still make it to work at the usual time. Perhaps this will be the start of a new tradition. : )

We spent Christmas with my family as usual... with the added bonus of a near-daily visit from PNGD/The Princess, now 15 months old, walking, saying a few words, redecorating the Christmas trees and generally keeping us hopping. Extreme cuteness all round. Many photos were taken. ; )

For the most part, I was able to enjoy her and her presence on its own merits. But I did have one very emotional moment. Every time she and her mom (PND) left my parents' house, she would take off and lead her mom in a merry game of tag/hide and seek around the car -- peeking around the corner -- before PND scoops her up & into her car seat.  (PND assured us she only allows her to do it at my mom & dad's -- they have a fairly long, wide driveway, on a quiet court with very little traffic.) It was hilarious. (I captured one such chase on video, filming through the living room window.) The first time she did it, I was laughing so hard I thought I was going to wet myself, & I felt tears of hilarity rolling down my cheeks.

And then suddenly, I realized I was crying for real. Laughter to tears, in the blink of an eye. I think my mom noticed, & dh patted me on the shoulder while I wiped my eyes. Just so precious. So much that we've missed out on. :(

It was also tough watching my mother trek off to various neighbours' houses to see their visiting grandchildren. I went with her a couple of times. I'll admit it, I get a kick out of seeing the miniature versions of the people I've known since they were kids themselves, too. ; ) But it was painful to see my mother's eagerness to share in some of the joy of other people's grandchildren, knowing she doesn't have any of her own, & why. :(

Today, dh & I stopped at the cemetery en route to shopping & dinner out. A beautiful, bright red cardinal was hovering in the snow-covered tree beside the columbarium where Katie's niche is. Breathtaking. : )

I had hoped to have my usual New Year's meme done & posted tonight, but I haven't even looked at it yet. I suspect my answers would be pretty much the same as they were a year & two years ago. Oh well. I may still get it done. Being half Ukrainian, I figure I have until Ukrainian New Year, right? ; )

I hope you've all had a good holiday. I leave you with a photo of the Christmas decorations at the Toronto Eaton Centre (including several gigantic illuminated reindeer roving through the mall): 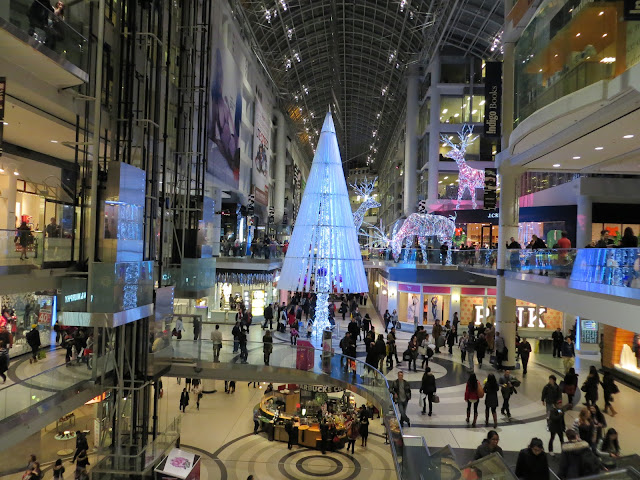 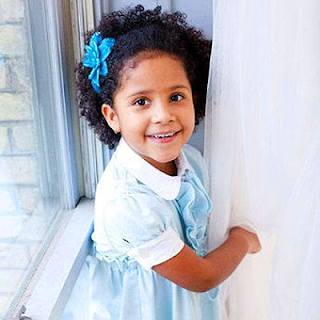 I never met my mother-in-law. She died before I ever met her (although dh & I were already together, albeit in the long-distance phase of our relationship).

She died exactly 30 years ago this past Saturday. She was in her early 50s, only a little older than I am now.

Coincidentally, all of us were together that night at BIL's celebrating our oldest nephew's 24th birthday. Dh & I brought FIL & stepMIL;  SIL's family was there too. The house was full of food and laughter, and at one point, dh, his dad (now in his 80s), his brother and our two nephews were all piled onto the couch together, laughing & joking & punching each other. Three generations, so much alike, all of them.

I took a couple of photos -- I have many photos of the five of them together, over the years -- and as I did, I thought about the woman who made it all possible, and how much she would have loved to see this -- how proud she would be of her two boys and how they've grown up, and how proud she certainly have been of those two tall, handsome grandsons. I thought about how the most awful grief can sometimes, somehow, over time, morph back into some form of happiness once again. I thought about how much can change, for worse AND for better, in the space of 30 years.

This morning, dh & I were listening to last year's Vinyl Cafe Christmas concert on CBC Radio -- while getting ready to go into the city to THIS year's Vinyl Cafe Christmas concert.  The musical guest last year was Hawksley Workman, a rather quirky Canadian singer-songwriter. One of the songs he performed had me gulping back tears as we watched live last year, and had me running for the Kleenex again this morning as we listened on the radio. It was prefaced by a long story about his grandparents and the times he spent time with them as a child.

There was so much in the song -- washing dishes (the GOOD dishes, used only on special occasions) in the kitchen before we were allowed to start opening presents on Christmas Eve, "go and get the camera," setting the wishbone on the windowsill to dry, even putting out suet for the birds -- that reminded me of long-ago childhood Christmases with MY wonderful grandparents.

And as he sang the wistful line "three generations are only together for so long," I thought about them -- as I so often do at this time of the year -- and about the three generations who had been together the night before -- and how we need to cherish those good times while they last -- because they pass by so very, very quickly.

Coming soon(ish?) to a mailbox near you

One of the Christmas traditions that's important to me and that I've continued in the years post loss is sending an annual card. As I've written in past years, my choice of card has taken on added significance in the years since Katie came into our lives. All my cards have been picked with her in mind. Classic Pooh and angels have been recurring themes.

Inevitably, I know "the card" when I first lay eyes on it, & this year was no exception. I did look around a little more, just to see what was out there, but in my heart, I knew. : )  I actually had to send the clerk into the basement storage locker to find the quantity I needed. ; )

Once again this year, my card came from the Papyrus store -- it is called Snow Family. I love the family, and I love how the little snowman is looking straight up into the heavens, at a different angle than his/her mom & dad. 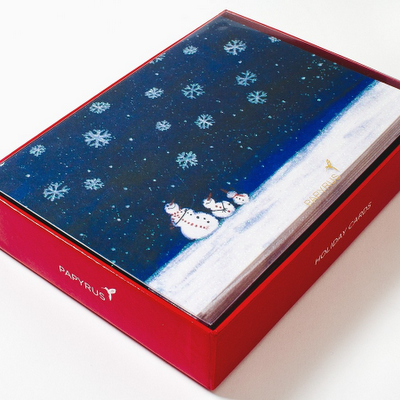 (Now to find time to write the darn things...)