Mel's recent posts about her seaside vacation in Maryland (including today's Show & Tell post) got me thinking about my own seaside vacations, albeit on the other (Pacific) coast. I first heard about Cannon Beach, Oregon, back in 1976, when my mother & grandmother travelled by train from our home on the Canadian Prairies to the Vancouver & then south to Seattle to visit my great-aunt, Grandma's youngest sister, who had recently moved to the Seattle area from Baltimore. They all drove down the coast to visit Grandma's & Great-Aunt's older brother, who lived in the Portland area, & then to Cannon Beach, so that Mom & Grandma could see the ocean -- not just Puget Sound or the Strait of Georgia, but the real Pacific Ocean, stretching out as far as the eye could sea.

In 1993, dh & I met up with my mother in Vancouver, & travelled together, first to Victoria & then by ferry through the San Juan Islands to Seattle to see the same great-aunt. The four of us made the trip to Cannon Beach for a couple of days, and dh & I fell in love with the place.

In the summer of 2001, dh & I had just finished the last of three agreed-upon IUI cycles. I got a BFN, & subsequently I felt myself teetering on the brink of a physical, mental and emotional abyss. As far as dh was concerned, we were done, finished. I wasn't so sure. I thought we should do IVF -- because it was there -- but I doubted my ability to withstand more of what I had already endured. If I couldn't hack an IUI, how was I going to handle IVF, with its much greater expenses, drugs dosages and stresses?

We went to see an infertility counsellor, who suggested we take the summer off & try to avoid anything related to fertility concerns for a couple of months before making a final decision with a fresh perspective. So we took a vacation -- flew out to see my parents & to travel with them by car, through the Rocky Mountains to Vancouver, south to Seattle & Cannon Beach ,and then back home through northern Idaho and then the flat plains of Montana & North Dakota. We took long walks along the beach, explored the quaint little shops in town, sat around bonfires on the beach, watching the sun set over the Pacifc, & enjoyed the company of my extended family. When we returned home, it was with the perspective and courage to say "enough" & farewell to further treatment.

Our most recent Cannon Beach trip was in August 2005. We flew to Seattle this time, meeting my parents, who drove, my sister, who flew in via Vancouver. In Cannon Beach, we had an impromptu family reunion of sorts: all but about four of my mother's cousins from that branch of the family wound up coming there, from as far away as Minnesota, California & New Mexico. I'm very glad we went, as it was the last time I saw my great-aunt: she passed away a few months ago at age 84 -- the last of her generation, & the last of my great-aunts & uncles.

All three times, we've stayed at this resort, just south of the town of Cannon Beach. My great-aunt liked it because it was one of the few places in town that would allow her to smoke on the property (albeit outside). Her two grandchildren loved it because it had a swimming pool (the ocean was OK for wading, but generally too cold for swimming) & was steps from the beach. There's a variety of accommodation for various budgets & needs, from small rooms to suites with kitchens, fireplaces and oceanview balconies. The town itself is a wonderful little place, full of artists' galleries & quaint little shops. There are no McDonalds, Starbucks or chain-type stores of any kind allowed. (Seaside, a few miles to the north, has all these things, if you're really craving them...!)

One of the main area attractions is Haystack Rock, which is visible for miles up & down the beach. At high tide, it's partly submerged, but at low tide, you can walk out to the rock & explore. 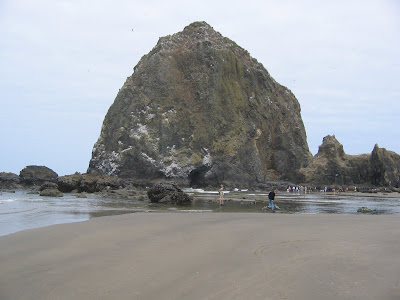 Here's a photo of some of the marine life left behind by the tides around Haystack Rock: 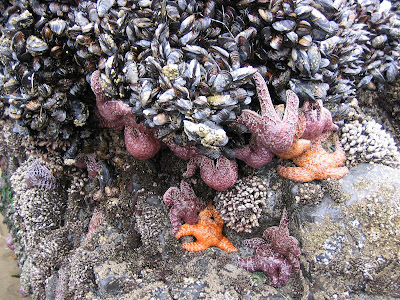 Just north of the town of Cannon Beach is Ecola State Park, which has some spectacular scenic views -- including the Haystack Rock, way off in the distance: 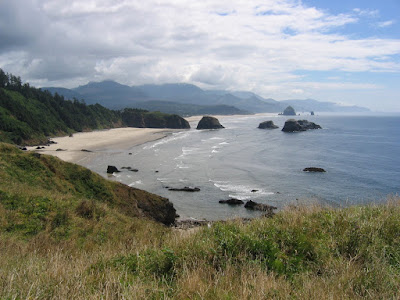 Dh & I hope to get back to Cannon Beach again soon, perhaps even just the two of us. for a change! ; ) We do want to get to the Atlantic someday too -- Nova Scotia, PEI, Newfoundland & Cape Cod are on our lists... and now, having seen Mel's photos (particularly of that CAKE...!), I think I'll be adding Smith Island. ; )

To see what others have to show & tell this week, click here.