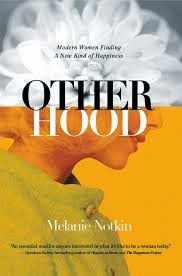 Melanie Notkin, founder of Savvy Auntie, has a marketer's knack for identifying and catering to a neglected market segment -- in this case, the growing number of women who don't currently and may never have children -- and coining catchy new terms to describe them/us -- including "PANK (Professional Aunt, No Kids)" and "circumstantial infertility."

Now Notkin has coined another catchy new term for those of us who are not moms. If you're a PANK, and not experiencing motherhood, you're part of the "Otherhood."

"Otherhood" is also the name of Notkin's new book. In her own words:


"We have gone without definition or visibility for too long. I am offering "Otherhood" as a name for our misunderstood group of women doing our best to live full and meaningful lives despite the frustrations of some of our most cherished longings. We, the Otherhood, who have yet to find our rightful, equitable, requisite place in society, deserve one....

"Otherhood uncovers, explores, and examines this overlooked and misunderstood segment of contemporary women. Part anecdotal storytelling, part inspiration, part reportage and part manifesto, Otherhood sets out to get to the heart of the issues, enliven the societal consciousness, and trigger conversation in and around our tribe."


(Ironically, I found this book in the bookstore on a shelf along with "The Mom Shift" by Reva Seth and "French Parents Don't Give In" by Pamela Druckerman. ;)  )

I really wanted to like this book. I was predisposed to like it. After all, I'm part of the Otherhood.  It's a subject near & dear to my heart. And overall, it's a good book that makes some important points.

But I have a few reservations.

First: Notkin uses composite characters throughout her book -- "women and men whose identifying characteristics have been modified or blended with others to protect their privacy" (with the exception of the experts quoted). Some experiences and events have also been modified, compressed or out of chronological order. Notkin is, at least, upfront about her use of this literary device -- there's a note about it at the very start of the book. Even so, perhaps it's the journalist in me, but this does tend to make me a little uneasy.

Second, while Notkin's description of the Otherhood is inclusive of all childless women, and the book's introduction talks about the rise of childless women generally, the book is primarily directed to Notkin's own particular segment of the Otherhood -- women like herself, who are not just childless but childless because they are single and looking for love and marriage before motherhood (even if that means they never become a mother at all). If you're single, childless and hoping to be a mother, this is definitely the book for you. If you're married, some of the content might not be quite as compelling.

That said, the final third or so of the book does move beyond the problem of finding a man to procreate with and delve into other reasons why women might find themselves childless as they enter their 40s.

Third, the book isn't just heavily focused on single women, but on a very particular subset of them. As Publishers Weekly noted in its otherwise positive review: "the affluent Manhattan-centricity of the author's cohort may alienate less-privileged readers."  Even though Notkin laments that "'Sex and the City' remains the dominant pop cultural portrait of our supposed lifestyle," many chapters of the book read like... episodes of "Sex and the City," revolving around Melanie and her 40-something single friends -- who invariably have fabulously glamorous-sounding careers (there's Wynn, a fashion PR executive;  Rachel, a beauty industry executive; Stephanie, founder and CEO of an advertising agency;  Meredith, an Ivy League-educated attorney... you get the idea...) -- meeting at a lengthy list of chic Manhattan bars and restaurants (the book could also double as a NYC bar & restaurant guide) to sip cocktails, eat brunch, and talk about the men they've met and why they won't take responsibility for planning a single date, nevermind committing to a serious relationship.

I suppose she is just following that old piece of writerly advice, "Write about what you know" -- but the Otherhood isn't just a neighbourhood in Manhattan. It might have been nice if she had gone slightly outside of her comfort zone and made an effort to talk to childless women elsewhere in the U.S. (and in the world, for that matter) -- maybe in some smaller cities or even rural communities, where the pool of eligible men is a lot smaller. Maybe a few more secretaries, teachers, human resources managers, accountants, retail clerks...

With these caveats aside -- the book is worth a read. While some of the content is narrow in focus, it covers the issues facing single women who want to be mothers quite thoroughly. The introduction sets the stage well, outlining the reasons why so many 40-something women today find themselves without the children they wanted, and the final few chapters move beyond discussions of finding a partner to other issues such as infertility, egg freezing, single motherhood and dealing with partners who are reluctant to have children, or more children (as is often the case with men on their second or third marriages).

With women like me, Notkin is obviously preaching to the choir. Hopefully her message will reach outside the Otherhood and provide some food for thought.

If you read "Otherhood," I'd be curious to hear what you thought of it!