I have something very, very cool (I think, anyway!) to share for Show & Tell this week.

As I've written in the past, genealogy is a subject that has fascinated me since I was a child. My great-great grandparents & their children were among the early settlers of the area where the states of N.ort.h D.ak.o.ta and M.inn.esot.a meet up with the Canadian border, along the R.ed Ri.ve.r V.alle.y (of the North), back in the late 1870s. How do I know this? My great-great grandmother, and later other members of the family, wrote letters to her parents & younger sister, who remained behind in a small town north of Toronto (not too far from where I live today, coincidentally).

When the (childless) sister died in the late 1940s, one of my grandfather's cousins travelled to Ontario to help wrap up her affairs, & rescued the letters she had lovingly saved over the years from the rubbish heap (or so the story goes). The letters begin with the very first letter sent by my grandmother after they arrived in the R.ed Ri.ve.r V.all.ey in the late 1870s, and end shortly after her death in the early 1900s (with some gaps, including several years in the late 1880s & early 1890s).

In the mid-1950s, my grandfather's cousin agreed to loan the letters to a local college to be copied (by typewriter!) for their archives. Everyone in the family got mimeographed copies, and the originals were returned to him. We've had little contact with this branch of the family over the years (even though they live in the same area where the family settled & where my mother grew up), and every now & then, someone in the family would wonder what had happend to the letters & whether this family still had them.

My grandfather and his cousin are both gone now, but a few years ago, a local history buff learned of the letters' existence & began inquiring about the whereabouts of the originals. My mother took it upon herself to stop by the cousin's son's business, introduce herself and express an interest in the letters, if they still existed. All of us felt that the letters were valuable documents, not only from our own family history perspective but as historical documents in their own right, & should be properly preserved.

The cousin was cordial -- said he was sure they were in the house somewhere, he would have to look for them. Every now & then, my mother would stop by again to say hello & reiterate our interest in the letters.

I was visiting my parents last week, & my mother & I planned to go down to her hometown for a day or two to meet up with (another) distant cousin, who was travelling in the area & doing genealogical research. The night before we went, the phone rang while we were playing cards. It was my grandfather's cousin's son. He had found the letters, and would we like to come get them the next time we were in the area?

The letters were, of course, technically his -- but he seemed agreeable to turning them over to us, and to having them properly preserved. He also expressed an interest in having them scanned & receiving a copy. (We said we were sure that was possible.)

The next day, mom & I stopped by his business & he brought out an envelope. I have read & re-read the typewritten transcripts of these letters since I was a child -- I know some of the passages practically by heart. I was in near tears as I gingerly turned the pages that my ancestors' hands had touched more than 100 years ago, & read the familiar words in their own handwriting. One thing surprised us: the pages had been handstitched together to form a sort of a booklet. Obviously they had been well read & treasured by the recipient through all those many years.

After we had looked through the letters -- and thanked him profusely -- he put them back into the envelope & handed it to me (!). In the car, Mom & I laughed: now we finally had the letters, & we were almost afraid of the responsibility of having them in our possession!

When I met the visiting cousin/genealogist for the first time about an hour later, I couldn't wait to tell her what we had in our motel room! That night, we all carefully looked through the letters. I opened the curtain to let in the natural light, turned off the flash on my camera, set it on macro mode, & took some photos of various pages with different people's handwriting -- my great-great grandmother & grandfather, their son (my great-grandfather) as a little boy, and his siblings. One letter, from 1886, had special meaning to me: it was penned by my great-great grandfather to tell his in-laws that his wife -- then about 45 years old -- had delivered a stillborn baby boy -- apparently the second stillborn in recent years. She had been very ill after the delivery, but had been spared to her family.

The next day, we took the letters to the county museum, unannounced. The manager there was just as excited as we were when we told her what we had to donate. She told us the letters were going straight into the safe (!) & she would begin the process of preserving them (encapsulating them in archivally safe materials) the next day -- after which they will be scanned, and will be available for anyone who visits the museum to see.

Here is the first page of the very first letter, in my great-great grandmother's handwriting. The year is not on it, but I believe it was 1876 or 1877: 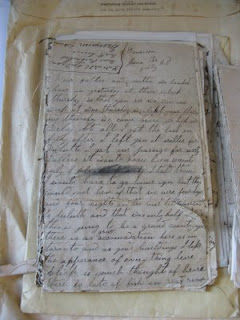 And a later letter, with Great-Great Grandmother's signature: 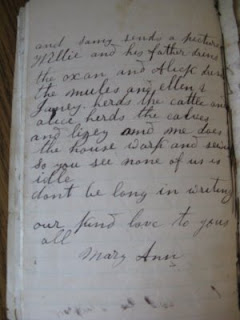 Is this not amazing stuff??