The countdown is well underway! The number of days until my vacation begins have happily dwindled into the single digits. And I'm starting to feel the Christmas spirit envelop me.

It started last weekend when we put up our Katie tree... ummm, Christmas tree -- covered as it is with reminders of Katie's ongoing presence in our lives (spiritually if not physically). 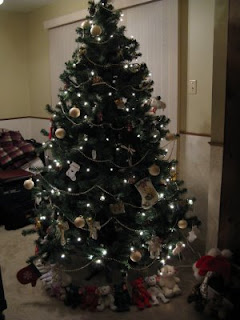 It continued with our support group's holiday memorial candlelighting service this past Tuesday night.

And it really kicked in yesterday, when we headed to BIL's house to celebrate our oldest nephew's 20th (!!gulp!! -- yes, I said, TWENTIETH!!) birthday. His birthday is actually Monday, but he has to work that night, so he was going with his friends later Saturday night to celebrate (& Lord knows what time they wound up coming home...)... but still... I love that he still makes time to have cake with his family & let us fuss over him & tell him for umpteenth time about how very cold it was the day he was born, & how we rushed over to the hospital to see him... how the nurse held him up in the nursery window (the practice of keeping babies in the rooms with their mothers hadn't yet been adopted at that hospital) and he opened his eyes & looked at dh & me as if to say, "Who are these people & why are they waking me up from my nice nap?" lol

For dh & I, his birthday is always bittersweet. We are so very proud of him and his brother, and yet seeing them grow up (so quickly!) into such wonderful young men makes us feel the swift passing of the years, and the loss of our own little girl, very keenly.

Nephew's birthday in December 1998, his 10th, was supposed to have been Katie's first big outing, or so we had imagined... dressed up in a velvet holiday dress, underneath her snowsuit, sitting in her carseat in the back of the car, sharing the limelight with her cousin. For the first year or so, after she was gone, whenever we were in the car, I often felt that if I could just turn around fast enough, I'd see her there, in her car seat, smiling back at me. Last night, I found myself reflexively looking back, as we pulled out of the driveway, en route to FIL's to pick him & stepMIL up -- but there was only the pile of presents.

Today, we went to the cemetery (as we usually do on a Sunday afternoon), for what will probably be the last time before we head westward to my family for Christmas. Last week, we tried to change the decorations on Katie's niche from a fall theme to Christmasy stuff... but the weather was so cold that the fall floral pick in her niche vase was frozen solid. The weather was milder this weekend, so we tried again & this time succeeded -- replacing the fall flowers with a Christmas pick, all greenery & glittery gold embellishments, a tiny red felt Christmas stocking, and a little red sled ornament with her name on it. 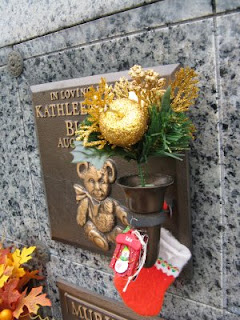 Now the holidays can really begin!
Posted by loribeth at 3:58 PM