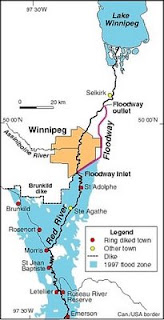 The R.e.d Ri.ve.r Va.ll.ey, and the floods currently threatening it, are much on my mind at the moment.

See the maps? I may not live there anymore, but this is Home. My little corner of the world. And especially that corner where the R.e.d flows north across the Canadian border, where the borders of two states and one Canadian province meet in a "T." 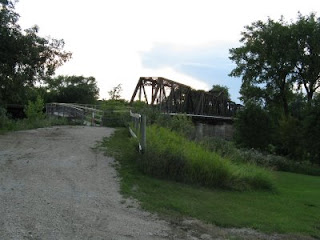 I was born in Em.ers.on, Ma.ni.toba, the town that sits right on that "T" -- literally, on the banks of the river. The hospital (which is still there, although now a personal care home & clinic) is just feet away from the protective dike that encircles the town, and from the road leading to the old railroad bridge (and from there, the old river road, out to my grandparents' farm). My sister & I used to hold our breath as our car went over the bridge. I felt that if the car fell into the water, if I was holding my breath, I could swim for the surface & to the riverbank. I still have dreams/nightmares about that bridge and trying to cross over it. It still exists, and I think you can walk over it, although car traffic has long since been diverted to a second bridge further downstream.

The land in the RRValley is flat as a pancake, which is why, when the river floods, it spreads out so widely. It is also some of the richest, most fertile land on the planet, which is why it was so attractive to the people who settled there. 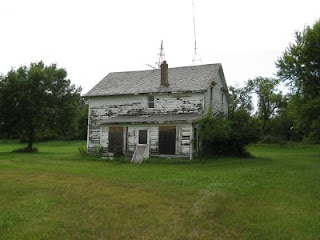 My great-great grandparents (on my mother's father's side) arrived in Em.ers.on in June 1876. They wrote back to family members in Ontario about seeing Sitting Bull & his braves dancing in the streets under the stars. In 1879, they moved a few miles across the border into Min.ne.sota. The farmhouse my great-great-grandfather built is still there, visible from the highway -- although it was badly damaged during the last big flood in 1997, and may not survive another.

My paternal grandparents were married in the river town of Le.tell.ier in the 1920s, and bought a farm just outside of Em.ers.on in the late 1940s. My dad remembers being evacuated during the big flood of 1950. After the flood of 1966 flooded them out, my grandparents built a new house on higher ground on their property.

I knew all this. I knew the river was there. But I was a teenager before I actually went into the pasture behind the barn on my grandparents' farm & realized the river was RIGHT THERE. ("We wanted it that way," my mother said -- meaning she didn't want us roaming around & getting too close to the muddy waters.)

After the 1966 floods, the province took action, building ring dikes around many of the small towns along the river/Highway 75. The house that was my very first home, on the main street of town, as well as my aunt's house on the next street over, were among many that were as torn down to make way for the dike.

The city of Winnipeg built a floodway which, during particularly bad flood seasons, can be opened up and divert the rising river waters around the eastern side of the city. It was nicknamed "Duff's Ditch" after Premier Duff Roblin (the Canadian equivalent of state governor) who insisted that it be built. Duff had the last laugh, & was invited to open the floodway gates during the last big flood in 1997. The floodway has proven its value many times over since it was completed, & is recognized as an engineering marvel. A recent Globe & Mail story noted that, in the 40-some years since it was built, the floodway has been opened 20 times, saving $10-billion in flood damages, according to government estimates. It was expanded again after the 1997 flood.

I had been singing "R.ed R.iv.er V.all.ey" ("Just remember the R.ed R.iv.er V.all.ey... and the girl who has loved you so true") for years before I learned there was another R.ed R.ive.r V.all.ey -- in Texas, I think? For me, this is THE Valley... & I am still the girl who loves her. : ) I can remember standing at the site of the farm where my grandfather grew up (across the field from the one in the photo above) on a chilly but sunny October day in 1998, helping my mother and some other relatives scatter some of his ashes there, as he had requested. I've moved many times in my life, but as I looked around me , at the land my ancestors had settled more than 100 years before, where I spent so much of my time visiting relatives as I grew up -- I knew in my heart -- this is home.

To see what others are showing & telling this week, hop over here.
Posted by loribeth at 5:26 PM