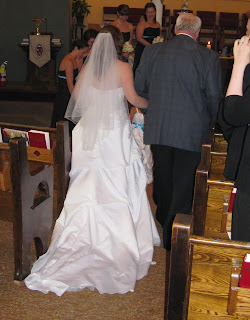 Another marker of time passing is watching kids I've known since they were babies mark their own life milestones.

Last fall, I wrote about how my Parents' Neighbours' Daughter (PND) called to tell me she was engaged, and already planning her wedding for the Victoria Day long weekend in May. As I wrote then, PND was a mere three months old when my parents moved in across the street, & probably spent almost as much time at our house growing up as she did at her own. There was no question that we would make the trip west to be at her wedding, and there we were, as she walked into the beautiful old church on her father's arm.

Have you ever tried taking photos & keeping the camera steady while simultaneously stifling the huge sobs that are wracking your body? (Not to mention trying not to muck up your glasses too much with tears, so that you can actually see the wedding.)

As I watched her walk through the door into the church, part of me had an odd flashback to watching her as a toddler in an adorable pink snowsuit, walking back home across the street by herself (with her mom watching from their window & we watching from ours) -- stomping on all the iced-over puddles (typical kid). There was utter disbelief that she was actually all grown up & getting married, that I really was seeing this happen. Gratitude that I was able to be there to see it.

And, of course, wrenching grief -- the scab being torn off the old wound again -- knowing that I would never, ever see my own daughter, radiant in a white gown & walking down the aisle with her proud father.

Fortunately, after the initial tsunami of emotion that swept over me, I managed to choke back the tears and got through the rest of the ceremony all right. Manouevred my way through dinner all right -- my biggest fear was accidentally ingesting a tomato or tomato-related food & having an allergic reaction, marring an evening that I wanted desperately to enjoy.

And then I had to give a speech.

A few weeks before the wedding, PND had asked my parents whether anyone from our family -- her second family, she calls us -- would like to speak at the dinner. I knew someone from our family had to do it. And I knew that someone was going to be me, lol. I knew my parents wouldn't -- they seldom, if ever, give speeches, and I knew they would probably be feeling at least as emotional as I was that night, if not more so. I also correctly gauged my sister's response when my mother told her of PND's question (which was "Hell, NO!" lol).

I'm not totally at ease speaking in public, but I'm not a total neophyte at it either. I was a junior high debater and gave speeches in 4-H competitions, and I was a member of a Toastmasters club for 7-8 years, although I hadn't done any speaking in quite awhile -- and certainly not at an emotional event in front of a couple hundred people, mostly strangers.

Still, I said I would do it. I knew what I wanted to say. Heck, I already had half the speech written for me in my blog. ; )

There was a bit of a funny echo from the microphone when I began speaking. As I progressed, I could feel my heart pounding in my chest. I just wanted to get through what I had to say without bursting into tears. And while I had to pause for a moment as my voice caught near the end -- as I thanked the bride's parents & brothers for sharing their daughter & sister with us for all those years -- I made it through just fine. Bit my lip to hold back the tears as the bride got up from her seat to envelop me in a huge hug. Saw the bride's mom wiping her eyes & knew I'd done my job.

The other marker took place just this past week, when dh & I attended our youngest nephew's high school graduation. We'd gone to his older brother's four years ago, and there was absolutely no question that we would also come to his. Neither set of grandparents seemed interested (or willing to sit through two hours and 240 other diplomas, lol), so it was just BIL & SIL, dh & me. Older nephew, now 21, was not there, having rented a cottage for a week's vacation with some friends & his girlfriend -- another sign of how quickly time is passing & how much they have grown up.

Nephew #2, who was a cute & chubby toddler, is now a strapping 6'2" or so, towering over dh & me and even his father, who is almost six feet. I felt a swell of pride watching him put on his graduation gown & cap and patiently pose for my camera yet another time. As we have long planned, dh & I gave him a card with a fat cheque inside to help him defray his university costs next fall. ("For books & bus fare -- NOT beer," we said, only half-joking.) He gave us a heartfelt "THANK YOU!" & some big hugs.

My only big lump-in-the-throat moment was watching him embrace his proud mother when we found him in the crowd after the ceremony was over. It was another one of those moments that reminded me that I will never share such a moment with my own child.

I had a good cry the next day, reading a message from SIL, thanking us & saying how happy they were that we could be there to share the evening with them. No, I wanted to reply, thank YOU for letting us share this experience with YOU.

In a sort of related vein, dh & I spent our Canada Day holiday afternoon today at the movies, in a theatre full of parents, kids & even a couple of babies (one of them squirming right beside me), seeing "Toy Story 3." I'd already read the glowing reviews -- along with articles written by grown men admitting that the movie made them bawl like babies. Even my two grown nephews admitted they cried when they saw it.

So I was somewhat prepared. Somewhat. I didn't expect that I would cry harder than I had at any movie since "Up," almost exactly one year earlier. Or that I would start crying from the opening sequence. Or that just thinking about the movie as I type this would make the tears well up in my eyes all over again.

In a coincidence that my SIL pointed out to us, the toys' owner, Andy, is now grown up, 17 years old, and heading off to college. (Just like our youngest nephew.) (I read that the same boy has voiced Andy in all three movies, growing up along with the character. ) And he has to decide what to do with his old toys -- to throw them out, store them in the attic, or donate them to the local daycare centre. Or take them, or some of them, with him to college. I won't spoil the movie for those of you who haven't seen it -- but be forewarned, bring plenty of Kleenex.
Posted by loribeth at 6:48 PM