Shades of grey... on a sitcom 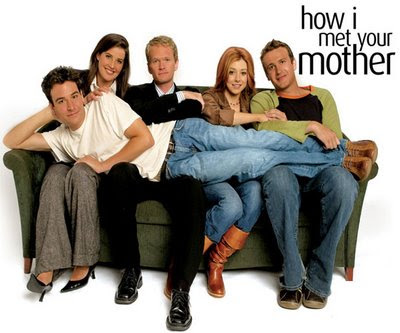 OK, anyone watch "How I Met Your Mother" last night? (If you didn't, & you are a fan of the show, this post contains spoilers -- you have been warned.)

In a nutshell, at the end of the last episode, Robin thought she pregnant, & that Barney was the father. As someone who has been adamantly childfree by choice, Robin was not particularly happy to find herself in this position.

Last night's episode started out with a big twist: instead of the usual voice over of Future Ted talking to his two bored kids on the sofa, there's a different sofa, two different kids -- and Robin's voiceover narration with a new title: "How I Met Your Father." Huh?

Then, Robin finds out that she's actually not pregnant, and she & Barney do a silly happy dance. She apologizes to the kids on the couch -- "sorry, kids." Huh? again.

Then Robin get called back to the dr... and in one of the those "only in TV Land" twists, gets told that she will never be able to have children. (They can tell all this from a pregnancy blood test? And even if they could, should they really be testing for other stuff without telling the patient?)(But, I digress...)

It's one thing to say you don't want kids -- quite another to be told you won't be able to have them. Robin struggles with this newfound knowledge. Her friends sense that something is wrong, but she doesn't tell them the truth, instead making up a dumb story that she's disappointed that she just found out she can never be a Canadian Olympic pole vaulter (!). (Robin's Canadianness has been the butt of many jokes on the show over the years.) Meanwhile, Lily, the clueless preggo (who went through "infertility" very briefly while trying to conceive), takes her shopping for baby stuff, & waves a maple leaf onesie in Robin's face. Poor Robin has to leave.

In the end, we learn that the kids on the couch were all in Robin's imagination. (I figured that one out long before dh -- it just wasn't in keeping with the arc of her character.) "I'm glad," she says, although there's a tinge of sadness in her voice.

Future Ted tells us that although Robin never became a "pole vaulter," she became a famous journalist -- and a bull fighter (!)

But the last line of Ted's voice-over narration, as he gives Robin a hug -- "She was never alone" -- absolutely slayed me. I bawled like a baby while dh held my hand. I guess it tapped into my deepest fear -- of being alone and forgotten at the end of my life. It's something I try not to think about -- our nephews will look in on me once in awhile (won't they??)... I have friends... lots of people with kids are lonely in their old age too... But it's hard not to sometimes.

I spent part of the morning ignoring work (shhh...) & searching for online reviews of the show to see what other people thought. This writer and this one gave it thumbs up. I read some comments on the plot summary on ew.com, and some people hated it. I got a rueful chuckle out of how many were trying to figure out how Robin might wind up being a mother after all, even if she doesn't have biological kids (adoption? stepkids?)(She just HAS to be a MOM!!! Somehow!!! Right???)

Overall, I thought the episode was very well done. The unexpected pregnancy is such a TV cliche. I like that they didn't go through with it -- go for the easy ratings (both main female characters pregnant)(even though a pregnancy would have been totally out of character for Robin). I like that they left Robin childless/free. I give everyone involved kudos for tackling a subject that's not the usual sitcom fodder, & exploring and acknowledging the shades of grey that creep into our lives -- how we can be both happy & sad at the same time about something -- how you can be sad that you don't have children but still have a good life without them.

Did you watch? What did you think?
Posted by loribeth at 7:30 PM