Wow, I can't believe it's been almost two weeks since my last post. Time flies when you're having fun...

[Well, I have to admit (sadly) that it hasn't been ALL fun. :p  Work has been extremely busy, with several major projects on the go -- the kind that seem simple when you start out & then keep growing tentacles....]

Happily, though, last week was a three-day work week for me. : ) Canada Day (our national holiday, once known as Dominion Day -- which I think is a much more poetic name -- but I digress...) was last Sunday, July 1st & Monday, July 2nd was a bank holiday -- ergo, a long weekend.

And then Friday was our (gulp) 27th wedding anniversary. And while it wasn't one of those numbers divisible by 5, the opportunity for another long weekend just seemed too good to pass up -- so we both took the day off -- and headed out of town on a long overdue road trip.

We'd talked several times about going to Kingston, a small city 2+ hours (not too far) down the road. We'd passed by en route to Ottawa, some years ago, but had never been there, and had heard good things about the place from others. It's an old city, chock full of history -- particularly right now, with bicentennial celebrations for the War of 1812 underway -- home to Queens University (one of Canada's best), and some excellent restaurants.

Clinching the deal, dh read in the Canada Day edition of Macleans magazine that Kingston has the distinction of being Canada's most romantic city.  (I'm not sure he read the fine print, though (lol):  the title was bestowed by Amazon.ca, based on sales of romance novels, romantic comedy DVDs -- and CDs by the ubiquitous Canadian crooner Michael Buble.) ; )

A former coworker used to own a cottage nearby, and when I e-mailed her for advice on where to stay & eat and what to see & do, she had just returned from a few days there herself. "It was hopping," she told me. "Be sure you have a place to stay before you go." Several people advised me to stay on the waterfront.  The first hotel I called was booked solid. The second was too, more or less -- but there had just been a cancellation, and I snapped the room up. When we arrived on Friday afternoon, our room just had two double beds :p -- but we did have a balcony with a great view of the harbour and the hotel restaurant patio below. There was live entertainment both nights -- I sat outside on the balcony with a drink and a magazine, listening and watching the sun set -- ahhhh!! 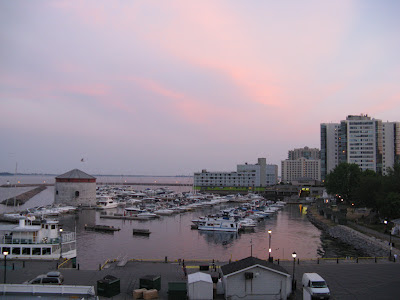 Friday was horribly hot & humid in Toronto, and only slightly less so in Kingston.  Princess Street, the main drag, runs uphill from the waterfront -- although thankfully, it was not as steep a climb as we had in Halifax a few years ago.  We spent a lot of time just wandering around the downtown streets and along the waterfront. Kingston is known as "the Limestone City" and has an abundance of well-preserved old stone and brick buildings.

We had a lovely anniversary dinner in one of the city's -- and Canada's -- most well-known restaurants, housed in a former stable (!) in a charming courtyard, whose original proprietor was a member of the 1960s band The Lovin' Spoonful. 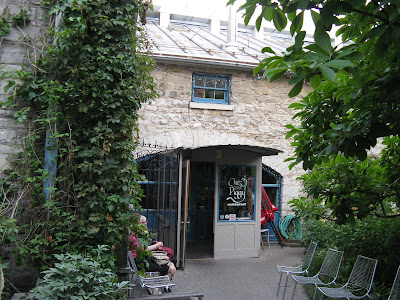 Where we had dinner on Friday night.


Afterward, we wandered through Confederation Park and around the beautiful old City Hall. There was a jazz concert in the plaza behind it -- which hosted a farmers' market the next day and becomes a skating rink in the wintertime. 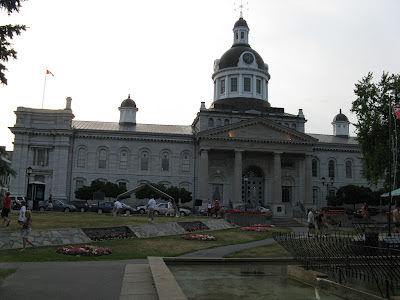 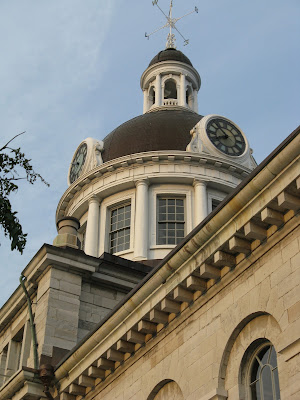 Views of Kingston City Hall.
Saturday morning, we woke up to rain :p -- but thankfully, it cleared by around lunchtime. We took a trolley tour, which hit the main attractions (Fort Henry, Royal Military College, Queens University, Kingston Penitentiary (!)...) and showed us a few places we likely wouldn't have found on our own, including some gorgeous old homes.

Later, we took a 1.5 hour boat cruise around Kingston Harbour & the Thousand Islands, which we also enjoyed. (We would have enjoyed it MORE if we hadn't been distracted by a family of four sitting near us in the dining area. Despite the abundance of scenery (not to mention the $25 per person price tag), the parents were both absorbed in their cellphones & an iPad and paying NO attention to their kids -- a boy & girl around 4-7 years old. The kids were running all over & hanging on the rail on the bow of the ship outside -- even though the captain announced as we were departing that there was to be NO climbing on the rails. Dh was having fits watching them, & even I was getting a little queasy. Yep, these are the people who get to have kids...! :p  It was one of the few jarring notes in a lovely weekend.)

En route out of the city on Sunday morning, returning home, we swung by Cataraqui Cemetery to pay our respects to Sir John A. Macdonald, Canada's first prime minister -- and, many would argue, still its greatest. If George Washington is known to Americans as "the father of our country," Sir John A. (also known as "Sir John, Eh?" lol ) most certainly would be considered ours. Journalist Richard Gwyn called him "The Man Who Made Us" in the first volume of his acclaimed two-volume Macdonald biography. (The second volume is titled "Nation Maker.") He was born in Scotland but spent much of his life in Kingston. 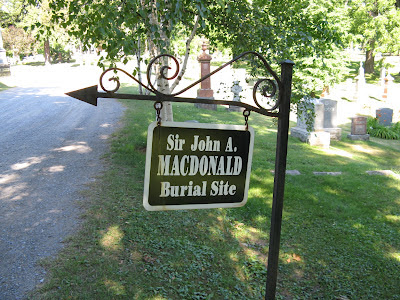 Modest sign pointing the way to Sir John A.'s final resting place.
The gravesite was not particularly well marked, with just a few small signs here & there along the winding roads pointing the way -- but we eventually found the plot, which is surrounded by a low, ornate iron fence,  marked by several historical plaques and a Canadian flag atop a high pole (which was actually difficult to see because of the abundance of tall trees). 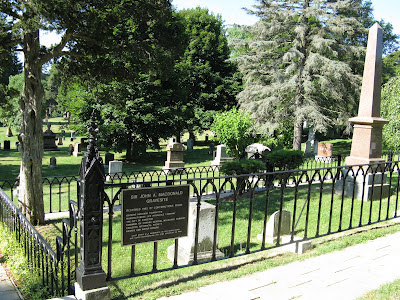 Macdonald family burial plot
Sir John's grave is marked merely by a simple granite cross, inscribed with his name, dates and the words "At rest." I kept thinking that if this had been any American president (nevermind the very first, and a nationbuilder at that), there would have been a huge monument, guided tours, etc. But this was, apparently, what Sir John wanted, and it seemed typically Canadian somehow. 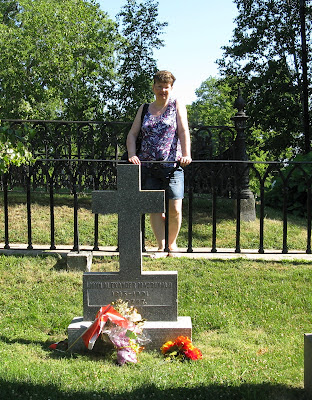 Visiting Sir John A. : )
Sir John, for all his many accomplishments, did not have the happiest life. He was haunted by the beating death of his younger brother by a drunken babysitter, which he witnessed as a child; his son & namesake, John Alexander, died at the age of 13 months;  the boy's mother, Sir John A.'s first wife, Isabella Clark, died of consumption (tuberculosis). He was mostly estranged from his second son, Hugh (who later became the premier of my home province, Manitoba), and his daughter, Mary (with his second wife, Lady Agnes Macdonald), was born with hydrocephalus and was both physically and mentally disabled. No wonder the man drank. (Although he maintained his wit:  Sir John A. famously quipped that "the people would prefer John A. drunk to George Brown (his political arch enemy) sober.")

Buried in the same plot with Sir John were his first wife, his parents, two sisters, and his sister's husband & inlaws. And,  most poignantly (for me, anyway), baby John Alexander. 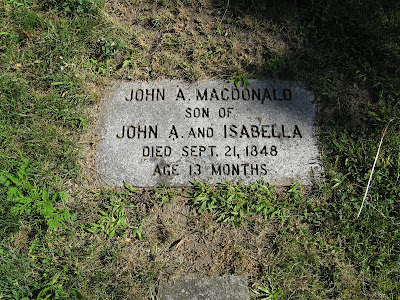 I have read that, after Sir John A.'s death in 1891 -- more than 40 years later -- a box of the little boy's toys were discovered among his father's possessions.
Posted by loribeth at 9:22 PM