It was good to see a post from Janis recently -- a lovely, lyrical meditation on the words "hold on."

It reminded me of a song by the same name by a Canadian singer-songwriter, Dan Hill. If you don't recognize the name Dan Hill, you will almost certainly recognize his most famous song, "Sometimes When We Touch," which was a huge, huge hit in the late 1970s. Familiarity has a habit of breeding contempt, however, and the song has gained a reputation, perhaps somewhat unfairly, as one of the sappiest love songs ever written.

Before "Sometimes When We Touch," Dan Hill had a moderate hit in Canada with another song, "Hold On."  The year that I graduated from high school (1979, erk!), I went back to the town where I had lived for grades 3-7 to attend grad for my best friend (and all my other former classmates), and this was the song that was played as they walked down the aisle. (Much more '70s than "Pomp & Circumstance," don't you think??)

My sister, a friend and I saw Dan Hill in concert in November 1978 -- just him and his guitar, in stocking feet and a soccer jersey, sporting his signature long curly hair & a bushy beard. We knew where the stage door was & even though my dad was waiting for us in a car out front (& there were no cellphones back then for us to check in on each other), we kept him waiting while we stood outside, until some kind soul let us in, and Dan graciously obliged our requests for autographs and photos (which I still have).

Janis's post led me to search YouTube, and I found a video of Dan -- 30-some years older, and with a lot less hair, lol -- singing "Hold On" at a 2011 Canada Day concert in the Toronto neighbourhood, where he lives. The album version has a gospel-style choir backup -- but it's nice with just him & his guitar too. : )  The years have also added some poignancy to the song, too... particularly knowing that Dan has battled prostate cancer in recent years.

On a lighter note -- long before Dan Hill, I loved another song called "Hold On" by -- wait for it -- Herman's Hermits.

I've written before about my almost-lifelong love for the Beatles, & how my mother took me to see the movie "Help" when I was a pre-schooler (& how I've been dreaming about having Ringo's ring stuck on my finger for almost 50 years since then).

And more recently, I mourned the passing of Davy Jones of the Monkees, another childhood favourite.

But the first boy band that really loomed large in my life was Herman's Hermits, another member of the British Invasion of the early/mid-1960s. Shortly after my mother took me to see "Help," we moved from one small Saskatchewan town to another -- and, in our new town, she took me to see Herman's Hermits in their movie, "Hold On." I made a new friend around the same time, and her older sister had the 45 of the song, which we used to listen to. 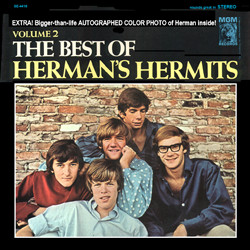 Shortly after that, it was Christmastime, and my sister & I got our first record player, along with two LPs -- the soundtrack from Mary Poppins, which we'd also just seen, and a Julie Andrews Christmas album. Shortly after THAT, it was my 6th birthday, and I got another album -- The Best of Herman's Hermits Volume 2. It came complete with a foldout poster of Herman (Peter Noone), which I had taped to the wall above my bed.

The poster has sadly vanished into the mists of time, but I still have the album, scratched, battered & priceless.

And I swear that one of these days, I am going to see Peter Noone in concert (he regularly makes the rounds of the local casinos) & get him to autograph it. I still think he's pretty cute, even if he's now 60-something. ; )

(And yes, there's also Wilson Phillips... but I think that's enough reminiscing for now, lol.)
Posted by loribeth at 9:33 PM