I'm not sure if I've mentioned Katie's tree before in this blog. (Anyone else's blog search function consistenly turning up "no matches" lately??)

Unlike many bereaved parents we know, we didn't deliberately set out to plant a tree in Katie's memory after we lost her. The tree came to be in a very roundabout way.  I can't even remember exactly when this happened;  it was probably the spring/summer of 1999 or 2000, a year or two after her stillbirth.  We had two big wooden, half-barrel planters in our little-used backyard, sitting on concrete slabs on either side of our deck steps, and we have several big maple trees nearby -- actually in the next-door neighbours' yard, hanging over the back fence.

One day when we were back there, we noticed a tiny maple tree sprouting up among the weeds in one of the planters. I don't know why one of us didn't yank it out along with the weeds, then & there. I think I may have thought, idly, that it would be fun to see just how big it got before we got around to pulling it up.

Something about that tiny tree taking root in the barrel appealed to dh. I don't remember how long an interval passed, maybe even a winter & a spring, but the tree kept growing, and it started getting pretty big.

Dh told me he wanted to plant it in our back yard. "It'll be Katie's tree," he said.

So he tugged it up from the barrel -- we were both afraid that he might have killed it, yanking it up by its roots like that -- but we planted it and watered it, regularly for a while, and staked it as it got a bit bigger -- and eventually pretty much left it to its own devices.

When I think of it now, it makes perfect sense that that little tree became known to us as "Katie's tree." Like Katie herself, it came from a tiny seed that planted itself and sprouted in an unlikely place (in Katie's case, my aging bicornuate uterus).

While (sadly) Katie did not thrive and grow, against all the odds, "Katie's tree" has.  : )

Here's a photo of dh standing in front of the tree in late October 2001, after a leaf raking session (the tree is already a pretty good size): 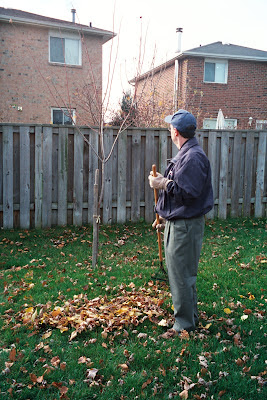 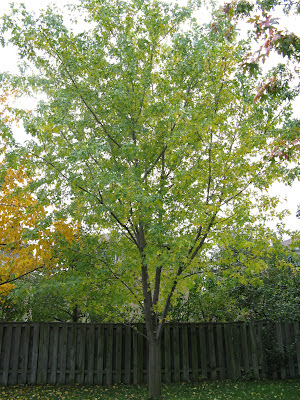 (I'm hoping to get a good current photo of the tree when the leaves have turned... if I do, I'll post it here!)
Posted by loribeth at 8:50 PM