"Rod: The Autobiography" by Rod Stewart 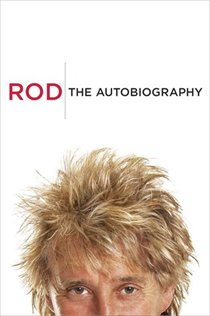 I can't say I was ever a huge Rod Stewart fan.  (My sister was definitely a bigger fan than I was -- we had a few of his albums in our joint teenaged collection, all bought by her.)

Nevertheless, growing up in the 1970s, he was always there, in the background -- part of the soundtrack of my life -- then and since -- and I did (& still do) like many of his songs, particularly the earlier ones -- "Maggie May" (which somehow never seems to get old, no matter how often I hear it), "Reason to Believe," "Stay With Me," "I Was Only Joking," "Downtown Train."  Perhaps my reluctance to declare myself a Rod fan stems from my all-too-vivid memories of the "Do Ya Think I'm Sexy"/"Hot Legs"/spandex years of the late 1970s & early 1980s ; ) (reinforced by the advent of MTV -- did you know that his song "She Won't Dance With Me" was the third video ever played on MTV -- and in all, 16 of his videos were played on its first day of broadcasting?).

This fall, I saw he had written a memoir. And of course, I couldn't resist buying it, and reading it over the Christmas holidays. I have, as I have admitted here before, a particular weakness for celebrity memoirs, and I figured Rod would have some good stories to tell. And he does. "In a season full of books by or about aging rockers," says The New York Times, "his memoir turns out to be the most fun."

Turning 68 (!!) next week, father of 8 (!!)(by five (!!) different women) and now a grandfather too, Stewart has been entertaining us for some 50 (!!) years. His book spins the to-be-expected tales of sex, drugs and rock & roll.  If you consider his record on a purely factual basis, his behaviour doesn't reflect particularly well on him. His serial womanizing, in particular (cheating on one Playboy model with... another Playboy model, for example), could (does) make him look like a jerk.

Yet, reading the book, you can't help but laugh & like the guy. ; ) He seems like someone who would be the life of the party and fun to down a pint with at the local pub. : ) He cheerfully admits it when he's acted like a jerk -- and marvels, many times throughout the book, that he is a very lucky man. And you believe he's sincere about it.

While naming the names of his many paramours, there are also some great stories about the likes of Long John Baldry, Gary Glitter, Jeff Beck, Ronnie Wood, Keith Moon, Led Zeppelin, Freddie Mercury and Elton John (they address each other as "Sharon" and "Phyllis")(??!), as well as both Hollywood and British royalty (Gregory Peck, Prince Charles...). Stewart also expounds on his passions for his family (of origin, as well as the one he created -- there is a hilarious chapter full of parenting tips, drawn from his personal experiences), football (soccer), fast cars and even model railroading.

Stewart admits he was heartbroken when his second wife, model Rachel Hunter, left him -- he claims he was faithful to her and didn't see it coming. He also writes about his brush with thyroid cancer that threatened his health, voice and career -- not to mention his trademark spiked blonde hairstyle (the subject of its own chapter in the book).  It's stuff like this that humanizes the guy and makes him sympathetic. Despite his cheating ways, he claims to still have good relationships with all his children's mothers.

Now approaching his 70s, he stays fit with a personal trainer, still plays soccer, and has entered a new phase of his career, issuing several highly successful albums of pop standards.  He also has a new album of original material coming out later this year. .

"There is no template for growing old as a rock star," he points out on page 359. "There's no pattern you can follow. We were the first to come this way, flaunting our youth as we did so, and we've got no choice but to be pioneers as we go out the other end, when youth has ceased to be an option."

From an ALI perspective, the book contains several points of interest. Stewart's oldest child, Sarah, was born when he was still a teenager. After signing the papers for her adoption, he thought that chapter of his life was closed -- until the girl and her adoptive mother turned up on his doorstep, some years later, accompanied by reporters. Their first meeting was understandably awkward, but they have happily developed a better relationship in recent years, out of the spotlight.

Having already fathered six kids, Stewart was reluctant to expand his family again with his third wife, Penny Lancaster, who desperately wanted children. He says he changed his mind after the events of September 11, 2001. Penny's first pregnancy ended in a miscarriage but, happily, the couple has since had two sons. The youngest, Aiden, born in 2011 (almost 50 years after Sarah, the first!), was the result of three rounds of IVF. "It's physically very punishing for the woman, and heartbreaking for both of you when it doesn't work," he observes. (Tell us about it, Rod...!)

As a Rod-related aside: Some months ago, I arrived at work slightly early, and my 20-something coworker/cubicle neighbour was playing music aloud on her iPod, as she sometimes does at that time of the morning, when nobody else is around. It was Rod Stewart, singing a pop standard from one of his recent crooner collections.

"Do you like Rod Stewart?" she asked me. I told her (as I told you all above) that I did, although not as much as my sister, and that I particularly liked his early stuff, like "Maggie May."

She told me she had never heard "Maggie May."

OK, maybe I am showing my age & lack of connection to the younger generation, but I was absolutely dumbfounded by this admission. (She immediately looked the song up on YouTube. "Hey, this is pretty good," she said.) I just couldn't imagine how anyone past grade school age could NEVER have heard "Maggie May." It was such a huge, huge hit (ubiquitous, almost), and I still hear it at least once every few days on the radio.

And then I realized that (a) kids today don't listen to the radio and (b) even if & when they do, it most likely (definitely??) isn't the boomer/classic rock stations that dh and I prefer.  Also, her parents were not born in Canada, so it's not likely she grew up with a classic rock (vinyl) album collection in their basement.

Chalk one up to the new generation gap. At least she had the good taste to like it. ; )

(And, for good measure, probably my favourite Rod song):