When something piques my interest, I tend to immerse myself in it -- even when the subject matter is not exactly mainstream. This includes infertility, pregnancy loss and... true crime cases. I read at least four books on the infamous Bernardo/Homolka murders & trials (the Chinese restaurant in Scarborough where Bernardo liked to hang out is just up the street from FIL's house -- although it's now an Islamic mosque)(!), and I just finished reading two books about the Shafia murders, back to back, both written by reporters who covered the trial.

I wrote about this case right at this time last year, just after a verdict was reached in the trial of Mohammed Shafia, his wife Tooba Yahya, and their son Hamed, originally from Afghanistan. The victims were the couple's three (mildly) rebellious teenaged daughters and Shafia's first (polygamous) wife, Rona Amir -- who was infertile, prompting Shafia to take a second wife, Tooba (who treated her childless sister-wife like a servant). Rona nevertheless stuck around and helped to raise the seven Shafia children, whom she loved dearly. (Needless to say, Rona's story, in particular, resonated deeply with me.)  Their bodies were found in a car that was submerged in a few feet of water at the bottom of the locks on the Rideau Canal near Kingston (where dh & I spent our anniversary last summer). 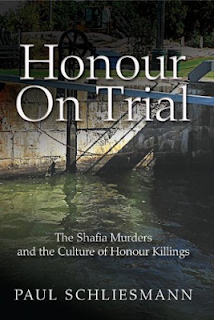 The book by local Kingston reporter Paul Schliesmann, Honour on Trial, is a quick read -- just 207 widely spaced pages, set in large type, with each "chapter" just a few pages long.  Nevertheless, it lays out the basic elements of the case well, and also focuses on the practice of honour killings and some other recent examples of honour crimes in Canada. It would be a good choice for someone looking for a quick overview of the story. 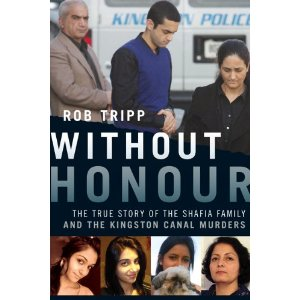 Without Honour by Rob Tripp is a longer and more detailed account -- almost too detailed in some parts. I could have done without the word for word retelling of the police and courtroom interrogations.

But Tripp's eye for detail adds much to our knowledge of the family and the case. He brings each of the victims to life, with help from the neighbours, teachers, relatives, girlfriends -- and boyfriends -- who knew them. He also tells us more about the police officers involved and the techniques they used to investigate and crack the case. The book includes photos, not just of the Shafia family members but of the Kingston Mills site where the car was pulled out of the Rideau Canal, which also add to our understanding of what happened.

Timothy Appleby reviewed both books in The Globe and Mail in December. You can read his take on them here. 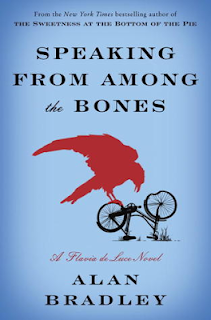 Speaking From Among the Bones by Alan Bradley is the fifth in his series of novels about Flavia de Luce, precocious pre-teen chemist/detective, and her family. Flavia, as one reviewer put it, is "Harriet the Spy by way of Agatha Christie, with a dash of Lemony Snicket and the Addams Family. Who could resist?" Because each book builds on the one(s) before, however, I would recommend you start with the first Flavia novel, The Sweetness at the Bottom of the Pie, and work your way through the series.

It's coming up to Easter, as well as the 500th anniversary of the local parish's patron saint, St. Tancred. Flavia is present when the saint's tomb is opened -- and the excavators find a little more than they had bargained for. On the home front, Flavia is also facing significant changes afoot at Buckshaw, the de Luce family's crumbling ancestral mansion.

Beyond the murder that drives the plot, Flavia learns of the tragic death of a child. The absence of her adventure-seeking mother, Harriet, who died when Flavia was a baby, also continues to haunt the family.

The book wraps up the mystery at hand... but nevertheless ends with a cliffhanger!! -- and it's a doozy, too. Exhilarating & frustrating at the same time. Unfortunately, I will have to wait until early 2014 for the next installment in the story -- tentatively titled The Dead in Their Vaulted Arches -- to find out what happens next. (Arrrrrggghhhhhh....!!)

But there's more than just another book to look forward to (Bradley actually has another five planned).  I remember writing in a review of a previous Flavia book that I thought they would make great episodes of PBS's Masterpiece Mysteries. Looks like the goddesses were listening: I recently stumbled onto a news item announcing that director Sam Mendes (whose latest movie was the critically and popularly acclaimed James Bond flick, Skyfall), has optioned the Flavia books to be adapted for television.