"The Juggler's Children" by Carolyn Abraham 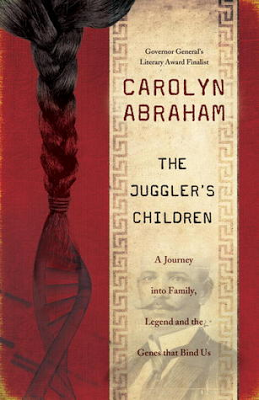 "There may be no better remedy for the genealogy blues than the Internet and several uninterruped watch-the-sun-come-up hours of clicking into the abyss. The sensation that you may be just a link away from pay dirt never leaves you. This must be why family-history hunting can be as addictive as gambling, why it rivals online gaming as one of North America's top pastimes. Keep plugging your ancestral particulars into the machine and some primitive region of the brain -- perhaps a Pavlovian instinct conserved from a day when persistent spear throwing eventually led to dinner -- suggests that your numbers will soon come up."  -- The Juggler's Children, p. 221

If you've been reading my blog for awhile, you'll know that one of my hobbies is genealogy. I like to think that while I may not be growing my family tree into the future by having children, I am growing it another way by revealing & preserving my family's history.

Delving into my family's past has been fascinating. When I started researching my family tree in earnest, some 30 years ago, I spent long hours at the library and the Archives of Ontario, scrolling through endless reels of microfilm until my head spun.

Since then, genealogy research has been transformed by the Internet. There are increasing numbers of records available online. I resisted the lure of the Internet for a long time (after a lull of some years after we moved out of the city), but finally succumbed. ; ) I bought a genealogy program for my computer, and have subscribed to Ancestry.com on & off. I find it pays to keep going back again & again to sites such as Ancestry, because there are always new records coming online, and always something new popping up to ponder over.

Today, genealogists have another new tool at their disposal:  DNA, which can be used to help you confirm or rule out a relationship with a potential relative.  Professor Henry Louis Gates Jr. has used DNA to interesting effect on several of his PBS programs, including "Finding Your Roots."

Carolyn Abraham, a medical reporter with The Globe & Mail, used DNA as well as traditional research techniques to help her untangle the mystery of her family's history, and has written a memorable book about it:  "The Juggler's Children: A Journey into Family, Legend and the Genes that Bind Us."

As a child growing up in Canada, Abraham would get asked by her schoolmates -- and, in turn, ask her parents: "What are we? Where did we come from?"  Simple questions -- but the answers she got were vague and complex. Abraham's last name would suggest Jewish heritage -- but she was born in England, attended Catholic schools and had brown skin. Her parents had come to Canada from India -- but her grandmother had insisted there was no Indian blood in the family (some Portuguese, perhaps?).  "Anglo-Indian" and "Eurasian" were among the suggested labels. Her mother's grandfather, according to family lore, was a sea captain from Jamaica. Her father's grandfather, on the other hand, was thought to be a circus juggler who came to India from China -- possibly on the lam.

Armed with DNA testing kits (at one point, she improvises with Q-Tips), Abraham, her husband and parents travel to India & Jamaica, as well as genealogical DNA conferences, in search of their roots. DNA testing, combined with traditional research, brings Abraham some answers, some surprises (some pleasant, some less so), and even more mysteries. Some get resolved, some don't.

She delves into the science of DNA, how testing works, what it can tell us (and what it can't), in a (mostly) understandable way.  Even as she researched her genealogy & wrote this book, new developments were unfolding that expanded the scope of what her family's genes could tell her.

By the time you reach the end of the book (Abraham's daughter gets the last word -- and it's a great summation), you realize that for all of us, the answer to the question "who do you think you are?" may be less definitive than we think.