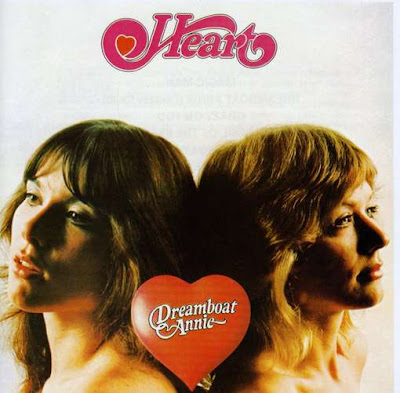 I was 14 years old in 1975, and at the top of my Christmas/birthday wish list was "Dreamboat Annie, the debut album by a new band called Heart, whose songs "Magic Man" and "Crazy on You" were dominating the radio.

(The band was American, but living in Vancouver and, since the album was recorded and produced there, it qualified as "Canadian content" under recently implemented rules governing Canadian radio airwaves, thus guaranteeing heavy play.)

I don't remember if I got it for Christmas or my 15th birthday shortly afterward but I played the album to death -- it still remains a favourite on CD, and I still turn the radio up loud and sing along when the classic rock station we listen to plays one of its songs.  :)  I don't think the novelty of two girls playing rock & roll really registered with me back then -- but I did like having a female voice to sing along with, and lyrics sung from a female perspective, for a change.

I saw Heart in concert a few years later, when I was a university student. I believe it was in the summer of 1981, at an all-day outdoor concert at Winnipeg Stadium. They were the headliners, & I remember that Ted Nugent (back when he was better known for his music than his politics), Blue Oyster Cult and Loverboy were also on the bill. (Through the magic of Google, I've found the name of the one other band on the bill -- The Rockets -- and the exact date -- August 1st, 1981. Gotta love Google, lol.)  It was a beautiful, hot, sunny day, blue skies with fluffy white clouds rolling by. I bought & changed into a souvenir white tank top with a lace frill along the scoop neck with the Heart logo on it in red, & got thoroughly sunburned by the end of the day (the importance of sunscreen not yet part of our consciousness, and even if you did wear it, it was probably an SPF 4 or 8). I think that was when it first struck me just how unique and amazing it was to see two women playing straight out rock & roll onstage. Ann had that killer voice, of course, but I think I was most amazed by her younger sister Nancy, playing guitar just as well or maybe even better than any guy I had ever seen.

Earlier this year, Heart performed Led Zeppelin's "Stairway to Heaven" as the members of Zeppelin were honoured at the Kennedy Center. The clip was widely circulated on YouTube, with cameras focusing on a misty-eyed Robert Plant watching in the balcony. I already knew Heart could do an amazing Zeppelin, because they finished off the concert that summer day in 1981 with a note-perfect rendition of "Rock 'n Roll," which I still rave about to friends, 30+ years later.

Here's a YouTube clip of Heart doing that song live in 1978, a couple of years before I saw them: 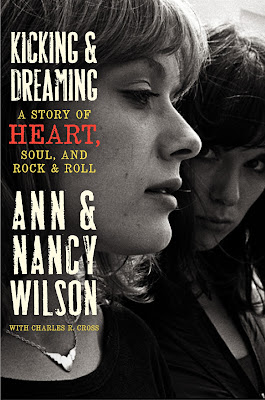 I hadn't realized that Heart actually made a name for themselves doing Zeppelin covers very early in their careers, until I read Ann & Nancy Wilson's joint memoir, "Kicking & Dreaming: A Story of Heart, Soul and Rock & Roll." I started the book in the lounge at Pearson Airport as dh & I waited for our flight home to visit my parents, and I finished it a little more than 24 hours later. : )

The book is written with alternating voices (she said/she said), plus the occasional interjection from other family members, friends and bandmates.

Ann, Nancy and their older sister Lynn grew up in a military family. Because they moved around so frequently, the sisters became extremely close. Music and singing together was always a part of their lives.

And then, in 1964, came the Beatles. Like many teenagers of the time, Ann & Nancy were both transfixed by the band during their legendary appearance on the Ed Sullivan Show. But they soon noticed a critical difference:  while all their friends wanted to marry the Beatles, Ann & Nancy wanted to BE the Beatles.

The book traces the rise of the sisters' musical careers & personal lives and loves -- there really was a "Magic Man" -- and attempts to answer the question of what it's like to be a woman in a male-dominated industry. Tales of outrageous sexism abound.  There are also fun vignettes about the sisters' encounters with rock stars from Freddie Mercury and Elton John to Stevie Nicks and John Mellencamp, a memorable proposition from brothers Eddie & Alex Van Halen -- and even, yes, their early hero, Paul McCartney.

ALI issues figure in the later pages of the book.  Nancy actually left the band for awhile to pursue motherhood via IVF with her husband, writer/director Cameron Crowe.  The decision to take a break from music put a strain on her relationship with her sister -- and her marriage eventually ended under the strain of infertility treatments & miscarriage -- but Nancy did eventually become the mother of twin boys via donor eggs and a surrogate, rejoin her sister onstage and finally find love again with a new husband.

Ann has never married but, in her 40s, she became the adoptive mother of first a girl and then a boy.  She also became a den mother of sorts to the grunge bands that sprang up around Seattle in the 1990s.

This was a fun read. If you are a fan of Heart, of women in rock & roll, or of strong women &/or rock & roll generally, you will enjoy this book.

Since this book was written, Heart was recently inducted into the Rock & Roll Hall of Fame. Doing the honours was Chris Cornell of Soundgarden, one of Ann's young grunge band protégés, who appears in the book.