"The Dead in Their Vaulted Arches" by Alan Bradley 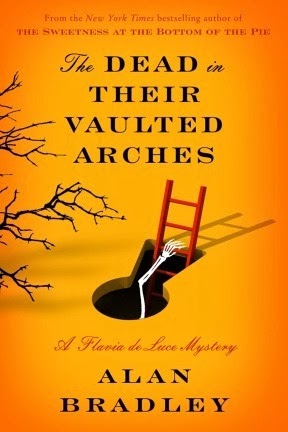 If you're a longtime reader of my blog, you might remember that I'm a big fan of Alan Bradley's Flavia de Luce mystery series. The previous (fifth) book in the series ended with a bit of a cliffhanger... so I was eagerly awaiting the latest/sixth installment in the series, The Dead in Their Vaulted Arches.

It was also due to be released on Jan. 14th, right around my birthday. In fact, I was in our local mega-bookstore the day before my birthday & looked it up on the store computer. The computer said there were (already) 16 copies in stock. I scoured the store thoroughly, looking on the display tables, in the new release section at the front of the store, the fiction and mystery sections, but there were none to be found. I decided to nab one of the clerks and ask about it. I figured there must be some copies lurking in the back storage room, and I was willing to play the birthday card, if necessary. ; )

Now, every OTHER time I have visited that store, I haven't been able to walk two feet without someone asking if they could help me find something. I wandered up & down the aisles and stood on the steps to an elevated section for a good 20 minutes, looking for someone to help me in my elusive quest. Not a single clerk to be found anywhere, except for two behind the counter, ringing in sales for a long lineup of customers. Figures. :p I had to wait to get my copy on Jan. 14th, like everyone else. :(

The book opens as the de Luce family -- and the entire village, as well as some special guests (Winston Churchill??!) -- await the train bearing the casket containing the body of Flavia's mother, Harriet, who went missing years earlier in the Himalayas under still-mysterious circumstances. A stranger whispers a cryptic message into Flavia's ear -- and then, moments later, lies dead on the tracks, pushed under the train by someone in the crowd.  Who killed him and why? And what connection might there be to Harriet's disappearance and death?

The book unfolds over the next few days leading up to the funeral, with Flavia, her father, sisters and others mourning Harriet and dealing with her loss in their own individual ways. This being 1951 Britain, they mostly do so with stiff upper lips firmly in place. Nevertheless, Flavia has some sharp observations to offer on the nature of grief, bereavement, loss and mourning that resonated only too well with me, and likely with others who have also experienced the loss of a loved one.

If this book sounds interesting to you -- I would strongly recommend that you start with the first book in the series, The Sweetness at the Bottom of the Pie, and read all the books in order. You would probably still enjoy this book as a standalone, but it does build on & refer to characters and events from the past books, and I think you would appreciate it much more if you had ... in context.

I don't seem to have reviewed the initial book in the series, The Sweetness at the Bottom of the Pie, on my blog, but here's where I've written about the others: