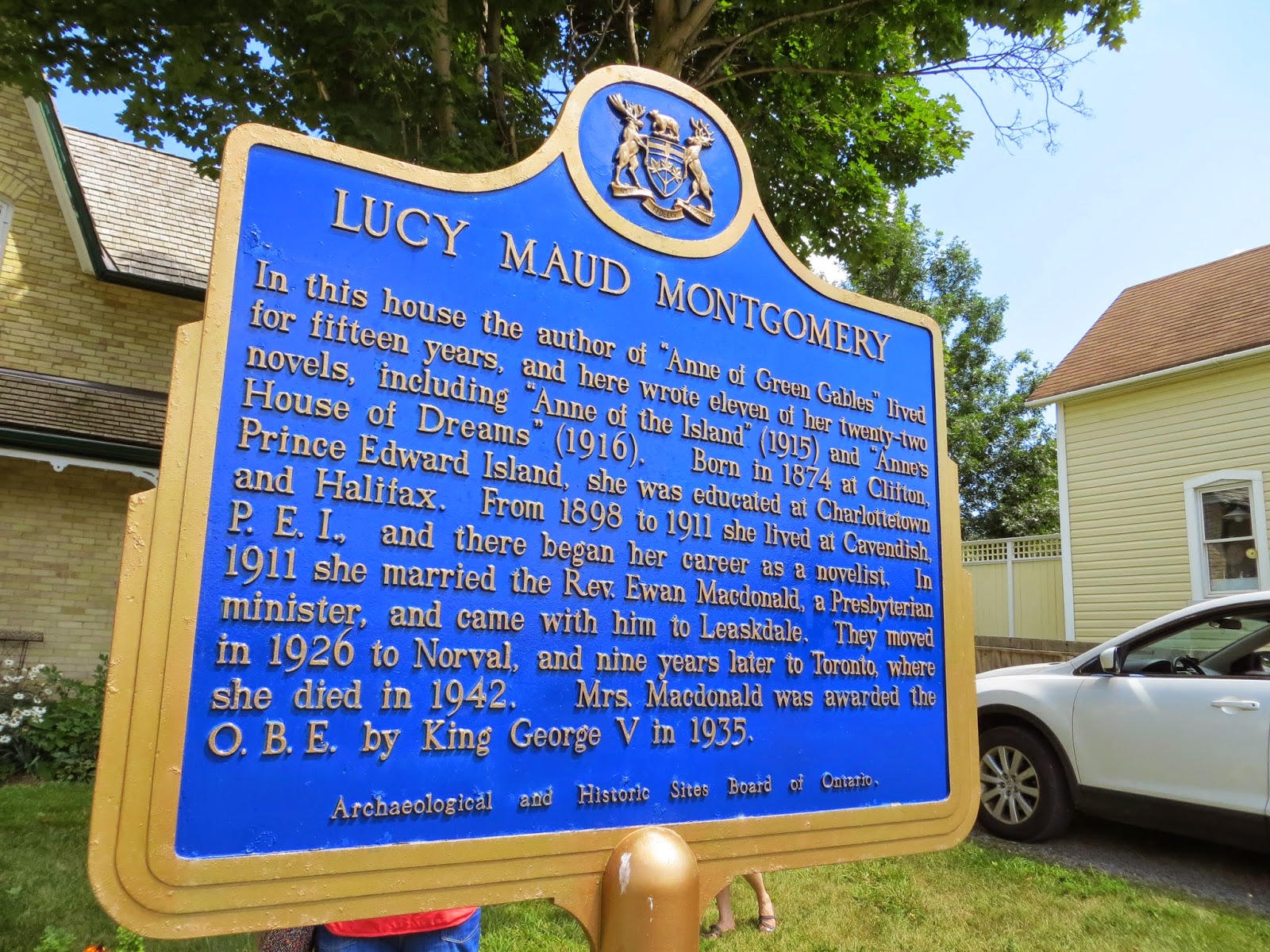 Back in 2008, I wrote about a new biography of Lucy Maud Montgomery that had recently been published, which reminded me that "Anne of Green Gables -- and her author -- were stillbirth mothers."  I STILL haven't read the book (erk!) -- but I was reminded again this past weekend that LMM was "one of us" -- or, as Anne might say, "a kindred spirit."

Dh & I spent Saturday afternoon in Leaskdale, the tiny Ontario community where LMM lived between 1911 and 1926, and where her husband served as the Presbyterian minister.  Leaskdale is a little off the beaten path (albeit not terribly far from Toronto -- about an hour's drive north and east of the city, perhaps a little more or less, depending on your starting point) and certainly not as well known a LMM destination as Cavendish, the Prince Edward Island community where she grew up and where so many of her novels are based. (She also lived in Norval, northwest of Toronto, and spent her final years in Toronto itself.)

But in recent years, Leaskdale has begun to assert its connection to Montgomery. The Lucy Maud Montgomery Society of Ontario has taken ownership of the historic Leaskdale church, as well as the nearby manse where LMM and her family lived.  The manse has been restored and redecorated with period furnishings to match how it looked when LMM lived there as closely as possible. Both buildings are open for tours during the summer & early fall months, and for special occasions and by appointment at other times during the year. The society receives no government funding, relying on private foundation grants, donations and fundraising.

After taking the tour (for which we were charged a mere $5 each), and a look around the well-stocked gift shop in the church basement, dh & I headed upstairs for an afternoon performance of "Maud of Leaskdale,"  a two-hour, one-woman show based entirely on the journals LMM kept during her years in the community (i.e., every word uttered onstage comes directly from the journals).  The young actress (from nearby Uxbridge) playing Maud (as she preferred to be known) is absolutely wonderful in the role ("Sometimes we think she really IS Maud," the volunteer who introduced the play told us, laughing, and it was easy to see why). Dh, who basically came along to humour me, admitted he thoroughly enjoyed himself, far more than he expected.

I think both of us visibly winced when "Maud," confiding to us her delight in finding herself pregnant for the first time in her late 30s, commented, "I always thought a childless marriage was a tragedy." (Ouch.)

But I forgave her, because (a) at that time, it WAS a tragedy for many women, who had no other outlet in their lives beyond family, and (b) I knew what was to come.

Her first son, Chester, arrived safely in 1912.  A while later (fall 1914), Maud told us that she was expecting Chester's little sister or brother... and shortly afterward, her face contorted with grief, cradling a small empty wooden cradle in her arms, she sobs as she tells us about how her baby (another son, Hugh Alexander) was born dead, how she never ever imagined this, how much she wanted and would have loved this child, while so many other children in the world go unwanted and uncared for.

As tears welled in my own eyes & I squeezed dh's hand, I marvelled at how, despite the century between us, the words Maud wrote/spoke could so easily have been written by any stillbirth mother today.  I knew about little Hugh; I had read the journals the play was based on. But there was incredible power in hearing those words spoken aloud, in having Maud's experience -- my experience, your experience -- given voice.

Hugh's death coincided with the beginnings of World War I, and both events cast a dark cloud over the next several months for Maud. No doubt she worked through some of her feelings as she wrote "Anne's House of Dreams," in which Anne & Gilbert suffer the loss of their first child, a little girl they name Joyce -- but as she finishes the novel, she admits to us that it has taken a lot out of her. (No kidding!!)

Maud refers to Hugh several other times during the play, including on his 9th birthday, wondering what he would have been like. (She had one other son, Stuart.)

I was so pleased that the producers chose to include so much about this part of Maud's life in the play. It's not the only aspect of her life explored, of course, and there is laughter as well as tears to be had.  If you are in the Toronto area and are a LMM fan, it is well worth the trip -- but note that the play is only on through the end of August, and only on certain days.  See the society's website for further details. This is the third summer the play has been performed at the Leaskdale church;  with any luck, it will continue in summers to come.
Posted by loribeth at 8:14 PM