After reading "The Gift of Wings" by Mary Henley Rubio earlier this fall -- probably the definitive biography of L.M. Montgomery (which I reviewed here)  -- I dove into two other Montgomery-related books that had also been languishing in my gargantuan to-read pile. 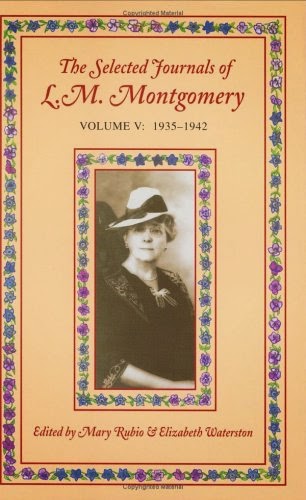 The Selected Journals of L.M. Montgomery, Volume V: 1935-1942 as edited by Mary Rubio & Elizabeth Waterston, is the final volume of Montgomery's journals written before her death in April 1942, and the one volume that I hadn't read previously.

In some ways, I wish I had read this before tackling "The Gift of Wings," just to round things out  (also, that's the order in which the books were published).  On the other hand, Montgomery self-edited her journals, and barely wrote a thing during the last two years of her life. She is not always specific about what is happening, making sometimes cryptic references to certain people and events. In that respect, it was helpful to have read Rubio's book first, as she fills in some of the critical blanks and sheds new light on Montgomery's journal entries. (I did have to go back to "The Gift of Wings" at certain points while reading the journals to remind myself what the heck she meant.)

As much as I love Montgomery, and as fascinating as it is to get a glimpse into her personal thoughts and feelings (however guarded), I have to admit, this is not a happy or cheerful book, and in some respects it was probably the hardest volume of the journals to get through. As it begins, Montgomery and her family had just moved from Norval, where her husband had lost his job as Presbyterian minister, to retire in Toronto. While Montgomery mourned the loss of her home in Norval, where she had led a mostly happy life, she begins on a hopeful note: her lovely new Tudor-style home in the suburb of Swansea was the first she had ever owned, and she was now closer to the intellectual and social circles of Toronto she desperately wanted to be part of.

But her husband's mental and physical health continued to deteriorate;  and she obsessed over her two sons -- their educations and love lives in particular. (Who said helicopter parenting is a 21st century phenomenon??)  Her oldest son, Chester, proved to be a huge disappointment to her, getting kicked out of engineering school, barely squeaking through law school, knocking up a girl from Norval, secretly marrying her -- and then running around with other women (and that's just for starters...!).  Her younger son, Stuart, was in many respects the "golden boy" of the family, but Montgomery frets over his studies as well, and especially over his ongoing friendship with a Norval girl she deems highly unsuitable.

It is difficult -- and, yes, sometimes a bit monotonous -- to follow as Montgomery tries desperately to keep up appearances and hold everything together, spirals into depression, ceases writing her journal all together -- and then dies at the far too young age of 67. The final entry is heartbreaking in its brevity and despair.  If you are a big Montgomery fan, though, and have read the other journals, you will need to read this to complete the full picture of this amazing author's life. 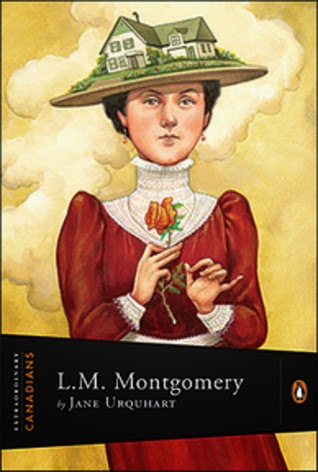 Extraordinary Canadians:  L.M. Montgomery was written by the novelist Jane Urquhart. While not as thorough or detailed a biography as Rubio's "The Gift of Wings," this is a great basic introduction to and appreciation of this beloved Canadian author, set in the context of her times. It also details her ongoing impact on Canada and on writers, both Canadian and generally -- including a lovely personal story about Urquhart's mother.

Some other recent reading of note:


While pushing egg freezing is rife with ethical complications, this move suggests that the physical act of bearing children will be more discussed at work. This change couldn’t come soon enough. While many companies laud their generous maternity benefits, we almost never discuss the no-man’s land before the baby, when many women yearn for that little miracle but their bodies have other intentions. Undergoing fertility treatment has none of the glamour of pregnancy, yet it can take up much more time and energy, not to mention have a huge impact on your wallet. Many of us, myself included, keep these painful episodes to ourselves but they can affect our professional lives in a major way. So it’s time to bring infertility out of the closet at work...

Despite the prevalence of infertility, few companies or workplaces appreciate the impact it has on their employees, [author Reva] Seth said.