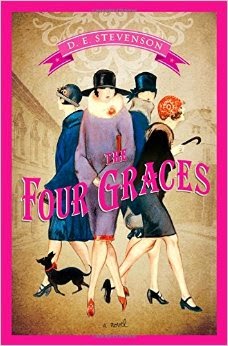 In my last book-related post, I reviewed two books by D.E. Stevenson, and said I was tackling "The Four Graces" next -- hopefully in time to participate in my upcoming Yahoo group discussions.

Not only did I get the first few chapters read before the questions about them were posted, I actually finished the entire book the same day the first questions for the group started appearing. :)  The discussion will continue for the next few weeks, and it's fun to be able to (finally) take part.

I enjoyed this volume as much, if not more, than the three Miss Buncle books that preceded it. It is tangentially related to that trilogy -- it takes place in a nearby village, shortly after the last Miss Buncle book ended (in the middle of the Second World War) and some of the same characters make appearances, including (very briefly at the beginning) Miss Buncle/Mrs. Abbott herself.  But I don't think you would have had to have read those books in order to read or enjoy or understand this one.

The title refers to the four Grace sisters, daughters of the widowed vicar of the church at Chevis Green:  Elizabeth (Liz), the oldest, who is doing farm work on the nearby estate;  Sarah (Sal), the main housekeeper;  Tilly (Matilda), who plays the organ and views outsiders with suspicions;  & Adeline (Addie), the youngest, who has enlisted in the women's auxiliary service.  The title may be just slightly misleading, as we don't actually see a lot of Addie in the book; most of the adventures that unfold revolve around the three older sisters, Sal and Liz in particular. (One reader review that I've read suggests that perhaps Stevenson intended to write a longer book, or a sequel that focused more on the younger sisters, but that obviously did not happen.) At first, I found it a little difficult to keep the sisters straight and who had said and done what -- but the more I read, the clearer their individual personalities became.

The Graces' comfortable, cozy, insular home life is disrupted, first by the arrival of a boarder, then by a local soldier who appears to be interested in one of the sisters (but which one??) -- and then by the arrival of Aunt Rona (the wife of their late mother's late brother), whose home in London has been badly damaged by bombs. It soon becomes apparent she is looking for a new husband as well as a new home. ;)

Although the book is not at all an ALI-related read, there were a few passages that appealed to my inner ALI-er.  First, in Chapter Ten, the Graces' maid Joan is relating some gossip to Sal about a falling out between Mrs. Toop and Miss Bodkin:


"It was at Elsie Trod's," said Joan with a relish. "Maria Toop was there, and in comes Miss Bodkin. They were 'aving a cup of tea and Elsie was giving a drop to 'ar baby. 'You didn't ought to do that,' says Miss Bodkin. 'Tea's bad for 'is stummick.' With that Maria goes off the deep end and says, 'What do you know about babies any'ow?' And that was 'ow it began."

Ouch. "What do you know about babies??"  I think more than a few of us have probably heard that line (or kept our mouths shut for fear of someone saying it to us).  :p  And of course Miss Bodkin is right, even if she doesn't have her own children to inform her advice.  (She's a bit of a comical character, a minor player, but a subject of pity and amusement throughout the book -- albeit her childlessness is not alluded to again, thankfully.)

There is also a small subplot, beginning in Chapter Eleven, involving Sal's efforts to help Mr. & Mrs. Element, a childless couple who have taken in Bertie, one of thousands of children who were evacuated from the cities during the war (away from the Luftwaffe air raids and bombs) to the relative safety of the country:

"I know," nodded Sal. "You've been most awfully good to him."

"Yes," agreed Mrs. Element. "Yes, that's right. Jim and me, not 'aving children of our own (through no fault of ours, Miss Sal, though there's people who throw it in our faces), we took a fancy to the little chap. Just like one of our own, 'e is."

"Well, Miss Sal, 'is mother wrote to Jim saying as 'ow the bombs are over and she wants 'im back...."

Well, what can I say? My heart went out to this poor woman whose childlessness "through no fault of ours" was so thoughtlessly thrown in her face, whose heart had been stolen by this child, whom she treated like her own, and who now faced the prospect of losing him. I've read other stories about wartime Britain and boarders and child evacuees, but never really thought about it from this perspective. Of course it would be hard to send a child back to his biological family after they've lived with you for a few years and become part of your own family. :(

And caveat emptor/spoiler alert: as you might expect, when there's a wedding near the end of a story, it's followed shortly afterward by the obligatory announcement.  :p  However, this WAS written in the 1940s, when such endings were practically mandatory. ;) I have decided to forgive Stevenson for this reason, lol.

There was one other passage near the very end (in Chapter 27) that I marked with a sticky note, because it seemed so very true about my own life (long before, during and since pregnancy):


There was a great deal to think about. What a lot had happened to the Grace family in a few short months, what changes had taken place! Life was like that, thought Liz. You drifted on for years and years -- then, suddenly, everything happened at once and all the things that had seemed so stable dissolved and disintegrated before your eyes... and life was new.

Like other D.E. Stevenson books, this is a light, gentle, charming book about a bygone time and way of life. Best read with a cup of tea in your other hand. :)