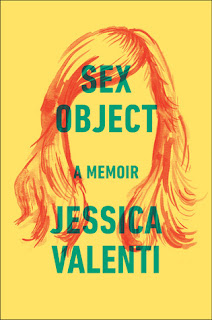 I seem to be on a feminist reading kick lately. ;)  "Sex Object: A Memoir" is a slim but powerful volume by Jessica Valenti, a prominent member of the new wave of younger feminists, who co-founded the website Feministing and writes for The Guardian, among other publications.

"Sex Object"  traces Valenti's experiences growing up female in New York City and, in particular, as an object of male attention -- some of it wanted, but a lot of it definitely not. What does it do to your psyche to be exposed to relentless, pervasive sexism, day in and day out, for a large part of your female life?   This is something that I don't think most men realize or understand, and that I don't think a lot women really think about in-depth. (Maybe because it's too depressing?)

Pretending these offenses roll off our backs is strategic -- don't give them the f***ing satisfaction --  but it isn't the truth. You lose something along the way... even subversive sarcasm adds a cool-girl nonchalance, an updated, sharper version of the expectation that women be forever pleasant, even as we're eating sh**.

This sort of posturing is a performance that I requires strength I do not have anymore. Rolling with the punches and giving as good as we're getting requires that we subsume our pain under a veneer of I don't give a sh**.  This inability to be vulnerable -- the unwillingness to be victims, even if we are -- doesn't protect us, it just covers up the wreckage.

But no one wants to listen to our sad stories unless they are smoothed over with a joke or nice melody. And even then, not always. No one wants to hear a woman talking or writing about pain in a way that suggests it doesn't end. Without a pat solution, silver lining, or happy ending we're just complainers -- downers who don't realize how good we actually have it. [emphasis mine]

(That last paragraph gave me a jolt of recognition -- ALIers, she's singing our song, isn't she??)

This book made me think about my own personal experiences with unwanted male attention and sexist treatment. I've never been flashed or groped on the subway, that I remember (thank goodness -- and knock wood), but I've got my own war stories to tell. (Don't we all?)  Back around the time of the horrendous 2014 murders in Isla Vista, California (which Valenti wrote about here), there was a hashtag going around -- #YesAllWomen -- where women described online their own experiences with sexism and harassment. I started (but never finished) a blog post into which I poured memories of my own experiences. Such as:
#YesAllWomen. #YesMeToo.

Some reviewers have called this book depressing. It is, in a way (particularly the final chapter, which is simply a mind-numbing sample of the ridiculously misogynistic comments Valenti has received through email and social media) -- but it also makes you think -- about your own experiences, about how pervasive this kind of behaviour is (still! today!! despite the many great strides women have made over the past 50 years), how long it has been going on, what it will take to inspire change, and what kind of world we are leaving to the next generation.

Valenti dedicated this book to her daughter, Layla.  ALI alert! -- Layla was born prematurely by emergency C-section when Valenti developed pre-eclampsia and then HELLP syndrome during a difficult pregnancy. Layla spent several months in the NICU;  her mother developed post-traumatic stress disorder. These are painful chapters to read, but I so appreciated Valenti's brutal honesty in writing them.