"The Rules Do Not Apply" by Ariel Levy 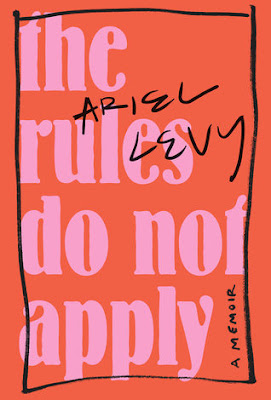 "When thirty-eight-year-old New Yorker writer Ariel Levy left for a reporting trip to Mongolia in 2012, she was pregnant, married, financially secure, and successful on her own terms. A month later, none of that was true."

[Flyleaf copy, "The Rules Do Not Apply"]

A couple of years back, I read an absolutely stunning first-person article by Ariel Levy in The New Yorker called "Thanksgiving in Mongolia."  Nineteen weeks into her first pregnancy, on a business trip to Mongolia (!), 38-year-old Levy delivered a tiny baby boy on the bathroom floor of her hotel room. He lived for just a few minutes.  And, as the passage above suggests, after the loss of her baby, Levy's life fell apart.

I found myself nodding throughout the article -- especially as I read, near the end:


...the truth is, the ten or twenty minutes I was somebody’s mother were black magic. There is no adventure I would trade them for; there is no place I would rather have seen.


I still find myself thinking about the article, more than three years later.

"The Rules Do Not Apply" includes and expands upon the material from "Thanksgiving in Mongolia," including Levy's memories of growing up with her unconventional parents in the liberated 1970s and 80s, the aftermath of her fateful trip to Mongolia, and revealing some details that hadn't been included in the article (including a bit of a surprise twist near the end).  It's not a long book, just over 200 well-spaced pages in a generous type size.  As with the article that preceded it, the writing is beautiful, at times stunning in its impact.

Like so many young women born in the latter half of the 20th century, Levy grew up feeling unencumbered by the "rules" imposed by society on past generations. But also like many of us, she discovers that freedom still has its limits and limitations. Her story of how swiftly a carefully constructed life can fall completely apart is something those of us who have experienced traumatic loss will well relate to. (Although I will admit that, for me, the trip to Mongolia & its aftermath were more interesting and compelling than the earlier part of the book.)

I nodded as I read:


When I hear that someone has lung cancer, Did he smoke? comes into my head midway between the syllables can and cer. Obviously, I don't say it out loud, but I want to know, because I want to believe that if only my loved ones and I refrain from smoking, we will be ineligible for lung cancer (and, ideally, every other kind of cancer).

"Have they figured out what happened yet?" people keep asking me about my own medical defeat.

And since I have done something that sounds bad, people -- even people who really love me -- persist in saying things like "Next time, you're not getting on any planes." It doesn't matter if I tell them that every doctor I've consulted has said unequivocally that there's nothing wrong with flying when you're five months pregnant. They want to believe that everything happens for a reason.

But in a strange way, I am comforted by the truth. Death comes for us. You may get ten minutes on this earth or you may get eighty years but nobody gets out alive. Accepting this rule gives me a funny flicker of peace.

Pre-Mongolia, in her early 30s, Levy interviewed New York Times columnist Maureen Dowd -- then 53, single, a Pulitzer prize winner with an amazing apartment. She was "intoxicated by her peculiarity, independence, and success."


I asked if she'd ever wanted children. She told me, "Everybody doesn't get everything."

It sounded depressing to me at the time, a statement of defeat. Now admitting it seems like the obvious and essential work of growing up. Everybody doesn't get everything: as natural and unavoidable as mortality.