No dress rehearsal (thanks, Gord) 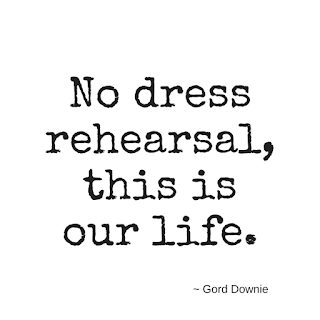 Just yesterday afternoon, dh & I were driving and "Bobcaygeon" by The Tragically Hip came on the radio. I remarked to dh how much I loved the line:  "It was in Bobcaygeon/I saw the constellations/Reveal themselves one star at a time."  Just a lovely image -- plus, you've gotta give him (lead singer & songwriter Gord Downie) credit for finding a rhyme for Bobcaygeon, right?

And then I woke up this morning, and he was gone. Dead at the way-too-young age of 53.

As I wrote last year just before the Hip's final concert -- and as pretty much any Canadian of a certain age could tell you -- the Tragically Hip are Canadian icons, and Gord Downie the closest thing we have to a poet laureate.  When the band announced last spring (2016) that he had been diagnosed with incurable brain cancer, it was huge news.  The entire country basically shut down to watch the Hip's nationally televised final concert in their hometown of Kingston, Ontario, in August 2016. It was one of those rare "where were you when..." kind of events where everyone came together, united in love and pride and grief, utterly transfixed.

Coming on the heels of the deaths of way too many other musicians I've loved lately -- most recently, Tom Petty and Kenny Shields -- and just days after we attended the memorial service for our friend & hairdresser (who also died in her 50s from cancer), I am feeling sad and tired tonight. Reflecting on how much cancer sucks, how short and fleeting and precious life is.

As everyone has been saying, as his family said in their statement, "We all knew this day was coming."  But that doesn't make it any easier when the time comes to say goodbye.  The news channels have been covering the story almost exclusively; radio stations are playing nothing but Hip music;  my social media feeds have been flooded with Hip videos and photos and expressions of grief.  Our prime minister, a Hip fan and friend of Gord's, who attended the Hip's final concert, gave a live statement in the halls of Parliament this morning, choking up and wiping tears.

A friend posted the image above on Facebook today -- a line from a well-known Hip song, "Ahead by a Century."

Sometimes it seems like time is just zooming by relentlessly. How the heck did I get to be 56 years old?? Married 32 years?  Retired two years already, after working for almost 30?

Next year will be 20 years -- 20 years!! -- since Katie's stillbirth.  Our nephews -- just little boys when we lost her -- are now grown up and getting married and starting families of their own.

My parents have seemed older and a little slower and more frail the last few times I've visited.  I know I am lucky to still have them. I have been attending far too many funerals for the parents of my peers lately.

I think about all the things on my to-do list -- the unread books sitting on my shelves, the places I want to travel to, the things I want to see and do. The friends I haven't seen in way too long. Realistically, my life is already more than halfway over. Time to start crossing some of those things off those lists.

What am I waiting for?

"No dress rehearsal/This is our life."