A blast from the past 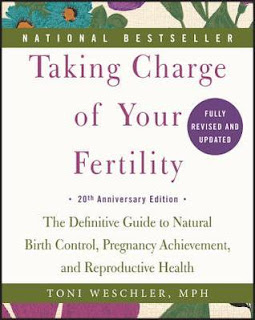 I was at the local mega-bookstore earlier this week, browsing the women's health section, when a familiar title caught my eye.

It was a 20th anniversary edition of "Taking Charge of Your Fertility: The Definitive Guide to Natural Birth Control, Pregnancy Achievement, and Reproductive Health"  by Toni Weschler (first published in 1995; revised & expanded in 2015, and popularly known as "TCOYF").

I had first seen this book around the time it first came out -- which happened to be around the same time I'd stopped taking birth control pills.  I'd assumed I'd be pregnant within a few months -- but that wasn't what was happening. I'd taken surreptitious peeks at the book during bookstore visits, but I was too squeamish to show up at the cashier with such a title in my hand -- an admission that we might need some help.  ;)  I eventually did get pregnant in early 1998 without consulting it.

Of course, you all know what happened next.  By the time our daughter was stillborn in August 1998, I was 37, fast approaching my 38th birthday, and hyper-aware that my biological clock was ticking louder and louder. My first question to Dr. Ob-gyn when he visited my hospital room, post-delivery, was "When can we try again?"

I bought my copy not long afterward, while I was still on leave after Katie's stillbirth, along with the recommended basal thermometer. I ripped out the temperature charting template page at the back & took it a Kinkos across the street from the hospital, the day I had my six-week post-partum checkup with Dr. Ob-gyn, & had some copies made (since I wasn't yet back to work with easy access to a photocopier).  (These days, there's a TCOYF companion website, with downloadable charts and even an app, along with Weschler's blog and an online community.)

TCOYF was "the Bible" of the subsequent pregnancy after loss e-mail group I joined that fall, where everyone was either pregnant after a loss, or desperately trying to be. There were many conversations and questions among the list members about "ewcm" (egg-white-like cervical mucus -- an indicator of ovulation), cervical position (high? low? open? closed?), dips & peaks in basal thermometer temperature, and other such intricacies.

I know several list members swore by TCOYF and credited their subsequent pregnancies to the knowledge they gained from it.  Needless to say, it didn't work for me. After a year of charting and trying to conceive on our own, I knew there was no further time to lose, and pressured dh into consulting Dr. Ob-gyn -- which sent us down the slippery slope of fertility testing, a referral to Dr. RE, several rounds of clomid and three IUI cycles with clomid plus injectable drugs (all unsuccessful). Even though I was told it was not necessary, I continued to chart through it all, and for some months (years??) after we abandoned fertility treatment, secretly still hoping for that elusive "miracle baby."

Eventually, I stopped doing that too. The book, which sat in the pile by my night table for so many years for easy consultation, went into a plastic bin full of (in)fertility books in my closet, along with the folder of pages and pages of carefully plotted monthly charts.  I think I still have the book (along with my keepsake copy of "What to Expect While You're Expecting"), although the charts went into the shredder some years ago.

Even though it didn't result in a baby for me, I am still very glad I read the book, & I still recommend it. I learned so much from it about my body and how it works, and I still automatically recognize the signs of when I'm ovulating and when my period is coming. I think it should be required reading for all young women, fertility issues or not (& probably young men, too).

Was TCOYF part of your (in)fertility journey too?
Posted by loribeth at 7:00 AM