"Fed Up" by Gemma Hartley 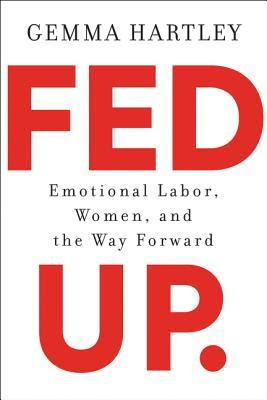 My latest reading has continued on the theme of women and anger. :)  While "Rage Becomes Her" by Soraya Chemaly provided a broad sociological look at the topic and Rebecca Traister's "Good and Mad" examined women's anger from a political perspective, "Fed Up: Emotional Labor, Women, and the Way Forward" by Gemma Hartley looks at women and emotional labour (and why we're justified in feeling sick and tired of doing it).  And, like those other books, it is an excellent exploration of this particular topic. :)

The book expands on Hartley's September 2017 article for Harper's Bazaar -- "Women Aren't Nags—We're Just Fed Up" -- which went viral.  The article began with an anecdote from Hartley's personal experience:  all she wanted for Mother's Day was for her husband to find a housecleaning service. It wasn't just a clean house she wanted, but (for once) not to have to do research, make phone calls, vet each service, get quotes and recommendations, make a decision, arrange payment and schedule appointments. Perhaps predictably, her husband made one call, blanched at the price, bought her a necklace and told her he would deep clean the bathroom
himself.


In his mind, he was doing the thing I had most wanted—giving me sparkling bathrooms without me having to do it myself. Which is why he was frustrated when I ungratefully passed by, not looking at his handiwork as I put away his shoes, shirt and socks that had been left on the floor. I stumbled over the large Rubbermaid storage tub of sitting in the middle of our closet. My husband had taken it down from a high shelf days before... To put it back, I had to drag a kitchen chair and drag it into our closet so I could reach the shelf where it belonged.

“All you have to do is ask me to put it back,” he said, watching me struggle.

It was obvious that the box was in the way and needed to be put back. It would have been easy for him to just reach up and put it away, but instead he had stepped around it, willfully ignoring it for two days. It was up to me to tell him that he should put away something he had taken out in the first place.

Hartley's definition of emotional labour is fairly broad (much broader than Arlie Russell Hoschild, who coined the term in 1983, originally meant, as she explains in a recent article in The Atlantic)(thank you to Ellen at Miss E's Musings/South City Sadie for pointing it out to me!). Says Hartley:


Emotional labor, as I define it, is emotion management and life management combined. It is the unpaid, invisible work we do to keep those around us comfortable and happy. It envelops many other terms associated with the type of care-based labor I described in my article: emotion work, the mental load, mental burden, domestic management, clerical labor, invisible labor.

Whether it all falls under the umbrella of "emotional labour," it's clearly labour of some kind that's primarily done by women -- and often under-recognized and under-valued.

This was a thoughtful, very readable exploration of a complex and timely topic, citing both both research and personal experience, and offering some guidance on a path forward to truly shared responsibilities, and more fulfilling, connected lives for both women and men. I gave it five stars on Goodreads.

(I previously wrote this post about emotional labour from an ALI/childless perspective.)