"The Young Clementina" by D.E. Stevenson 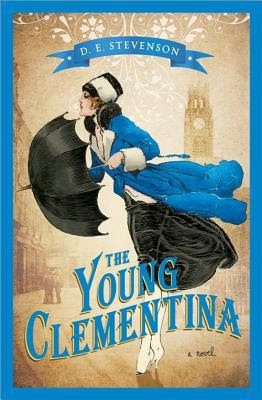 My first book finished in December is the latest selection under discussion by my D.E. Stevenson fan group. "The Young Clementina" was first published in 1935 as "Divorced From Reality," and has also been published as  "Miss Dean's Dilemma."
From the title, I expected the main character's name to be Clementina... but our heroine is Charlotte Dean, who grows up in the small rural community of Hinkleton, where her father is the pastor and her best friend is Garth Wisdon, heir to Hinkleton Manor. Predictably, they fall in love. But then the First World War intervenes. Garth returns a changed person and winds up marrying Char's spoiled younger sister, Kitty.  After the death of her beloved father, heartbroken Char retreats to London where she works in a library for 12 years -- until (now in her mid-30s) she becomes involved in a scandalous divorce case. Hinkleton once again becomes a refuge for Char, when she returns to care for her niece & goddaughter/Garth & Kitty's daughter (the Clementina of the title) in the absence of her parents.

This is one of Stevenson's early novels (first published in 1935), and it's noticeably different (darker) in tone and style from some of her other, later works. Group members have suggested she was still trying to find her authorly "voice."  It's a rather melodramatic tale, with some slightly predictable/cliched plot developments (or at least we'd find them predictable & cliched today), and the first-person narration and slightly formal language reminded me just a bit of "Jane Eyre."  Modern readers will also find some of the casual colonialism/racism/sexism (emphasis on wives bearing sons & heirs) jarring (not to mention the suggestion of a May/December romance with an underaged girl...!).

In its favour, it does have DES's usual well-drawn characters, witty dialogue and lovely descriptions of English country life in the 1930s, including the warm friendship that develops between Char and her neighbour Paula. It also has some compelling descriptions of life in England during and after the Great War. (I must admit that a sentence about influenza ravaging the village after the war gave me pause...!)

We're just beginning our discussion of this book, which usually adds to my appreciation of the story. I can't say this will top my list of DES favourites, but it was nevertheless a pleasant read.

I'll count this one again as a re-read when we're finished our chapter-by-chapter group discussion, early in 2021.