Anne of Green Gables -- & her author -- were stillbirth mothers 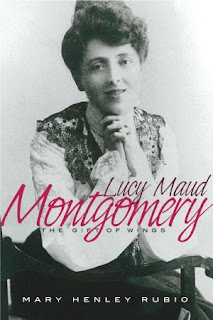 I was in a bookstore during my lunch hour today, & snatched up a fresh-off-the-press copy of "L.M. Montgomery: The Gift of Wings" by Mary Henley Rubio who, over the past 20 years with Elizabeth Waterston, edited five volumes of Montgomery's lifelong journals. (When I actually get to read the thing is the question... so many great books, so little time...!!)

Like so many other girls in Canada -- and around the world -- I read "Anne of Green Gables" when I was in Grade 3 -- and found a "kindred spirit." I quickly devoured all the sequels, as well as the other books Montgomery wrote, and books about her and her writing. I've seen the musical (although, sadly, never in Charlottetown, where it plays every summer) and the movies based on the books, as well as TV shows like "Road to Avonlea" & "Emily of New Moon." My favourite Montgomery books are "Rilla of Ingleside" (about Anne's daughter during World War One) and "The Blue Castle." And "Pat of Silver Bush" and its sequel, "Mistress Pat." And "Jane of Lantern Hill." : )

I read biographies of Montgomery that talked about her lonely childhood... but it wasn't until her journals were released that people began to realize what a double life she led: the fantasy world of her books, with high-spirited heroines and happy endings (although, in retrospect, one can see the dark currents that run through many of her books) versus her constricted life as an upstanding minister's wife, hiding the deep, dark secret of her husband's severe mental illness from his parishoners.

The Globe & Mail recently published an article by her granddaughter, Kate Macdonald Butler, posing the theory that her death in 1942 at age 67 was a suicide. (In a followup article, Rubio was interviewed in a followup article, saying she doesn't necessarily believe suicide was the cause of Montgomery's death.)

I don't think I realized, until her journals were published, that the second of her three sons, a boy named Hugh Alexander, was stillborn in August 1914, when she was almost 40. And not until years later, after my own stillbirth, did I realize that she relived this experience through Anne -- whose first child, a girl named Joyce, dies at or shortly after birth, in "Anne's House of Dreams."

Another book I can't wait to get into...!

Have you read any Montgomery books? Which one(s) are your favourites?
Posted by loribeth at 8:40 PM