This is going to totally date me, & I realize I sound like my own grandmother in this first paragraph...) I spent three years in the mid to late 1960s, kindergarten through the end of Grade 2, living in a small town in northern Saskatchewan. Back then, my sister & I got 50 cents a week in allowance money. We would often spend it at the local movie theatre, at the Saturday matinee. Admission was 35 cents and a bag of popcorn was 10 cents. We would often walk there & back by ourselves (as did all of our friends -- it was a different time & place…). We saw just about every Disney movie made during that time (animated & non), umpteen Elvis movies (such as "Speedway" with Nancy Sinatra and "Change of Habit" with Mary Tyler Moore), and… 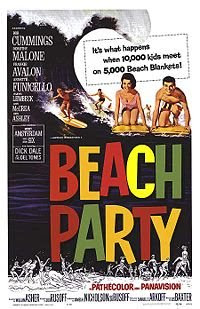 ...just about all of the Beach Party movies, with Frankie Avalon & Annette Funicello.

I watched the original "Beach Party" a few Sunday afternoons ago, for the umpteenth time, which got me thinking about this post. Viewed today, I realize the movies are low-budget, formulaic, dated and sexist, with inspid jokes and silly songs.

And yet -- I still love them (much to dh's bemusement) -- perhaps because they remind me of those more innocent childhood days. Eric Von Zipper, the Brando wannabe & his inept gang of sidekicks… Annette's well-covered belly button… Frankie & Deedee (Annette), fighting and making up and fighting and making up again… dear dumb Deadhead, falling in love with a mermaid in "Beach Blanket Bingo"... Frankie not only playing Frankie, but the dual role of British pop star "The Potato Bug" (!!) in "Bikini Beach" (around the time the Beatles were hitting the bigtime)... Linda Evans, pre-"Dynasty," as the vapid pop singer Sugar Kane (!!)... music by Dick Dale & The DelTones, and a very young Stevie Wonder... and of course, go-go dancer Candy Johnston, shaking her groove thang, in bare feet and a fringed dress, over the closing credits. What's not to remember fondly?

I asked for -- and got -- a boxed set of all the Frankie & Annette movies for Christmas last year.

P.S. Bathroom reno pics still to come... would you believe the towel bar pulled out the wall before I could take the "after" photos? StepBIL has promised to come over to fix it this week...
Posted by loribeth at 7:16 PM