If you're a regular reader of my blog, you'll know that dh & I renovated our bathroom this fall (mentioned in previous posts here and here). Having repaired the towel bar (which pulled out of the wall, having not been attached to a stud) & re-hung the photo (which still went with the new decor), I'm now ready to unveil the results!

First, some background. Our house was built in 1983-84, so was about 7 years old when we bought it in the spring of 1990. The original owners had done some work -- the acrylic panels that formed the tub surround were obviously not builder issue, & they had two kinds of wallpaper on the walls (floral print on top with a bluish green on the bottom), with a dark wood chair rail dividing the two sections.

The paper was not water resistant & was mildewing & peeling by the time Katie was stillborn in August 1998. As a "keep busy" project, my parents rewallpapered the bathroom while they were here. Again, we chose a small floral print (dark rose & sage green) on top, beige below with a coordinating large-printfloral border separating the two. I also had a ventilating fan installed while I was at home that fall.

The wallpaper held up fairly well, but the border had started to come loose in several areas & some of the seams were beginning to separate. The acrylic panels on the tub surrond, however, were yellowing. Then, in February, we noticed a leak on the living room ceiling below the tub. We recaulked the tub (thankfully, we have a second bathroom with a shower in the basement) and it held up for awhile, but started leaking again in August/September. We tried recaulking again (twice!) but the leaking continued. We decided it was time to take the plunge & renovate.

The question was, how? Dh, for all his virtues, is not especially "handy." His dad did our basement for us 10 years ago, but he will be 80 soon, so asking him was out of the question. We weighed the pros & cons and evenutally decided to ask dh's stepbrother (stepMIL's youngest son). He has a small business doing renovations & we'd seen his work, and although we knew there might be some hazards asking a family member to do the job for us, we knew he would do a good job for us at a reasonable price. (And he did!)

First, here are some "before" photos. 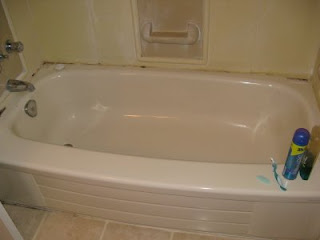 The old tub -- with most of the shampoo bottles, etc., removed (I had already taken down the shower curtain too -- it was sage green). You can see the mildewed caulking & soap scum on the yellowing acrylic panels. 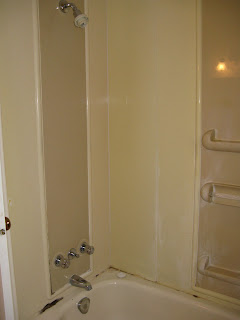 Another look at the tub surround. 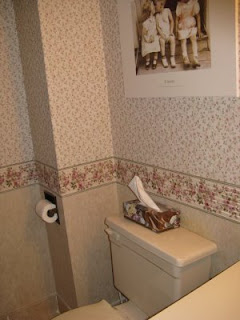 The old toilet (beige fixtures), toilet paper holder & wallpaper. We kept the picture on the wall (Il Bacio) -- I love it, & it went just as well with the new decor. 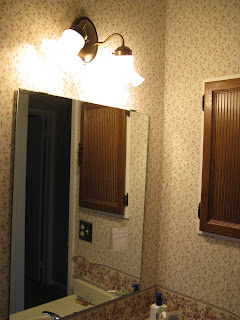 Here you can see the old 80s-style lighting fixture, mirror (which we kept), and medicine cabinet door. 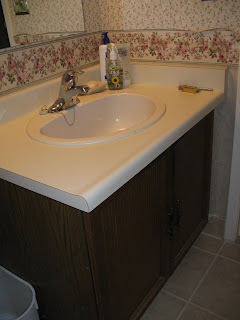 This is the old vanity (we had actually replaced the chipped-up sink & stripped faucets less than two years ago, so we re-used the relatively new faucets. The doors on the vanity & medicine cabinet are the same as our kitchen cupboards downstairs. It wasn't a bad vanity/sink overall, but6 the doors on it kept falling off, which was starting to drive me nuts.

Now for the "after!" 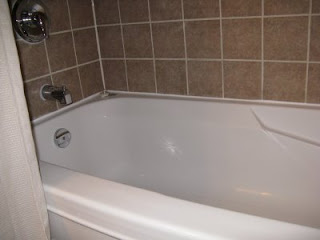 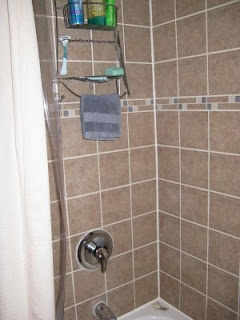 Another view of the tub/shower head & tiles we used, including the "border" tiles in the middle. I forgot to ask stepBIL about including somewhere to hang the washcloths & put the soap, so we got a metal rack that hangs over the showerhead. 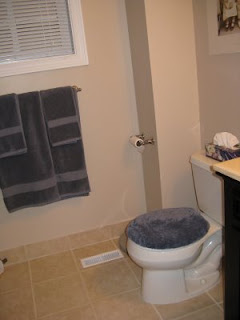 Here you can see the new (white) toilet, chrome towel rack & toilet paper holder, with the new blue towels & toilet seat cover (we also got matching bathmats). FIL did the floor tiles for us about 7 years ago. We still had a box full in the basement & stepBIL used them to fill in the floor around & below the new vanity. We also got a new grate for the heating vent. The window blinds are the same. We painted the walls Pink Beige by CIL, to complement the dark brown in the wall tiles. 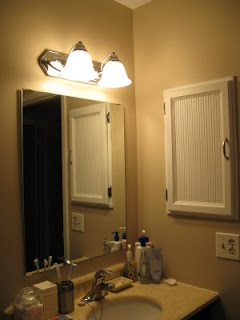 A view of the new lighting fixture, medicine cabinet door (which we painted white -- although I'm thinking of painting it the same colour as the wall), & the marble countertop & sink of the vanity. 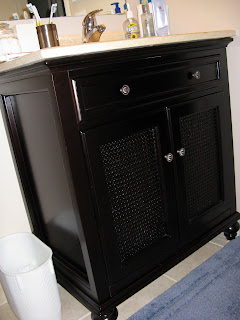 Here's the new vanity. It looks black here but it's actually a very dark brown cherrywood. We had trouble finding one we liked, & I thought it might be a tad too dark (& the marble a little too yellow), but it's not a bad fit. It is slightly smaller than the old vanity, though, which took a little reorganizing & paring down of my stuff!!

I have a "double header" Show & Tell this week. Despite a busy week at work, I snuck away from the office for an hour at lunch on Wednesday for a noon hour concert at First Canadian Place, near where I work. Over the years, I've seen a variety of Canadian talent performing at "the Waterfall Stage," a makeshift stage erected outside the Gap by a small waterfall near the elevators.

Wednesday's concert, though, was special. I don't know if the names Burton Cummings or The Guess Who mean much to those of you in the U.S. Burton was the lead singer of the Guess Who in its glory years, and left the band in the mid-1970s for a successful solo career. They were the first Canadian band to make it big in the United States in the 1960s, paving the way for todays Nickelbacks & other success stories. Their best-known song is probably "American Woman," which is heard in "Austin Powers: The Spy Who Shagged Me." A re-recording by Lenny Kravitz is heard over the closing credits of that movie.

Not only were the Guess Who Canadian, but -- special point of pride -- they were from Winnipeg, Manitoba -- the capital city of my home province. I wasn't quite old enough to remember the Guess Who in their heyday, but my mother tells me they played a teen dance at the city hall in her hometown when my sister & I were small, & even then, they were drawing big crowds. Thanks to Canadian content regulations, I heard lots of their music while I was growing up. Cummings has a beautiful, distinctive voice, one of the most instantly recognizable in rock & roll. He can rock, he can croon ballads, he is an accomplished piano player, and even plays the flute.

Cummings went solo in the mid-1970s & shortly after that -- some 30+ years ago now, yikes!! -- my sister and a few of her friends went to see him in concert for her birthday. I missed the concert, as I was at a student council conference that weekend, but heard all about it afterward (& saw him several times in concert myself in later years). Several of us were talking about it at band practice, & Miss M., our music teacher overheard us. She was a sharp, no-nonsense Brit. Classical music was her forte -- not rock & roll.
So we were shocked at what she said next. "Burton? Oh, I know him," she said, to much shrieking from us. Turns out she had taught him music in both elementary & high school, and she brought in her old yearbooks to prove it to us, pointing him out in the cast of the Gilbert & Sullivan operetta she had directed. She told us he was talented, but didn't apply himself (he wound up dropping out of high school), and she thought that a well-known local criminal lawyer who had attended the same high school actually had the better voice!!

Years later, I watched an episode of CBC's "Life & Times" series featuring Burton Cummings. Back at his old school, he paused outside the principal's office. "Many times Miss M. sent me here," he said ruefully, & I almost fell off the couch laughing. I could just see her doing it.

Wednesday's concert was to promote his new album -- his first solo album of new material in many years. It was just him and a keyboard, & he played for nearly an hour. The area around the stage was jam packed -- some people had been waiting for hours. I tried taking photos with my zoom lens, but they didn't turn out very well. 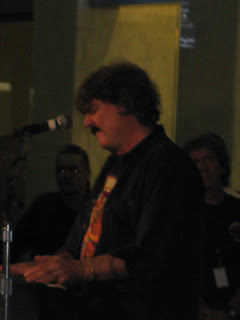 He played some new songs, as well as a few songs from his older albums & Guess Who days. His voice still soars, even though he is now 60 years old. And at the end, he did a theatrical little bow with a flourish.
After the concert, he was signing CDs at the nearby music store. I knew the lineup would be long, & I had already been gone an hour, so I regretfully passed & went back to work.
I wanted to ask him whether Miss M. had taught him to bow like that.

To see what others are Showing & Telling this week, hop on over here.
Posted by loribeth at 6:02 PM