Christmas has always been a special time for my family. But it's also been the busiest time of year for us at work, which has added a lot of stress to the holiday preparations. After our daughter was stillborn in August 1998 -- followed by the death of my grandfather later that fall -- I found myself re-evaluating just what was absolutely essential to my definition of Christmas, & what could go by the wayside -- in other words, where I most wanted to spend my limited energy.

I had no energy for Christmas baking -- most of the stuff I made was stuff my mother made & I could eat at her house anyway -- and no matter how much I gave away, I always seemed to have a ton left in my freezer to nibble on -- so I don't think I have baked since then. Likewise, I've had very little use for holiday parties -- particularly since the Worst. Christmas. Party. Ever. in 1998. So I don't care whether I attend any of those now.

But we have always put up a Christmas tree -- which, over the years, has become a Katie tree. And I have always sent out Christmas cards & a Christmas letter. When I lived at home with my parents, I always did my mother's cards (I can count the number of years she's sent out cards herself since I left home on the fingers of one hand, lol). Having moved around a lot, & having a large extended family, my card list is more than 100 names long.

When Katie was stillborn, I used our annual Christmas letter to tell everyone about it (although most of them had already heard through other channels). Every year since then, I've managed to work in a reference to her, albeit usually in connection with the volunteer work we do for our pregnancy loss support group.

The cards themselves are also usually a tribute to Katie, although not everyone would realize that. Most years, I've managed to find cards with a Classic Pooh theme (Katie's nursery was to have had Classic Pooh decor). Other years, when I haven't been able to find Classic Pooh, I've used angels.

I usually know "the card" when I see it, and even if I continue to look, I will usually return to the one I initially felt in my gut was the right one. That was the case with this year's card (below). No Classic Pooh was to be had, but I knew in my heart that this card -- a little girl, looking at Santa inside of a snowglobe -- was the right one for this year. The inside message reads: "Tis the season of magic. Merry Christmas." It's by Papyrus and I bought mine at Chapters/Indigo here in Canada.

Now, to set aside a few evenings to get them done...! 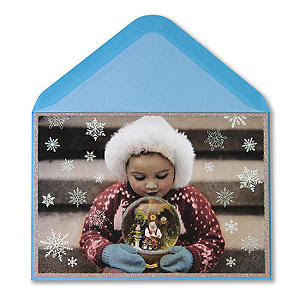