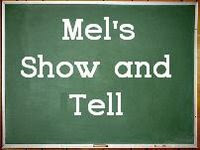 Second of my two-part Show & Tell this week (Part 1 is just below, here) No, I couldn't make up my mind just what to show you. So I'm showing everything I can think of, lol.

For last week's Show & Tell, I wrote about how we tackled the crawl space below my parents' house -- and some of the "buried treasure" we dug up.

The items I showed you then were sentimental items, ones that got the tears flowing. This week, I wanted to share a couple of "fun" (re) discoveries. 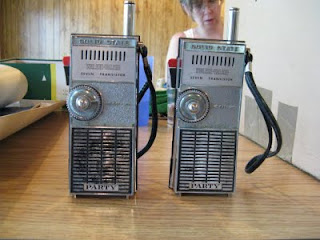 When my sister & I were about 6 & 7 years old, living in northern Saskatchewan in the late 1960s, the one thing we wanted for Christmas was a set of walkie-talkies, like the ones we'd seen in the Eatons catalogue. I don't know why they piqued our interest, but they did. Maybe we'd been watching too many episodes of Get Smart (we used to fight over who got to be the glamorous Agent 99 when we acted out the episodes we'd seen), & this was the closest thing we could find to a shoephone. ; )

I remember standing outside the Santa Claus matinee at the little movie theatre that December, after watching a kiddie movie & getting a free bag of hard candy. (Admission: 35 cents. Popcorn: 10 cents.)(Am I sounding like my own grandmother or what?) We couldn't get near the Big Guy himself (& were probably too shy to talk to him anyway), but I vividly remember talking to his assistant, a female elf by the name of Mary Christmas, whom we had seen on the after-school show of the local CBC-TV affiliate (a TV star!!), and telling her this was what we wanted. She said maybe, if we were good. And there they were, underneath the tree on Christmas Day.

We had fun playing with the walkie-talkies for a few years, and then almost forgot about them, until the summer of 1975. We were going on a long-planned road trip all the way out to the west coast -- Vancouver & Victoria, via Edmonton, Jasper & Banff -- with the family that lived across the street. We were travellling in two cars and I had the brillian (if I do say so myself) idea that we should take a walkie-talkie in each car to communicate with each other (this being at least 20 years before any of us owned a cellphone).

And it worked out really well. If we wanted to talk to someone in the car ahead of us, we'd flick our headlights on & off, open the window (although it was probably already open, given that we did not have air-conditioned cars in those days & it was hotter than H-E-double-hockey-sticks driving across the Saskatchewan and Alberta prairie) and raise the antenna. Not a great way to carry on a long conversation, but good enough for a static-y "Let's stop for gas in the next town." 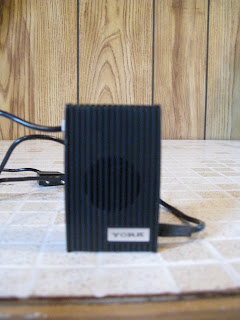 The tape recorder was a source of endless entertainment for my sister & our friends (three sisters) from across the street (the same ones we went with to B.C.). We taped records for each other. In those pre-VCR/PVR/Tivo days, we would set the microphone up in front of the television set and tape our favourite TV shows, like the Partridge Family -- & them listen to them, over & over & over again. (There is one Partridge Family episode -- "Danny & the Mob" -- that I think I can still recite dialogue from.) Or, when we were visiting our American grandparents, and luxuriating in the multitude of TV channels there (i.e., more than the one we got, lol), we'd tape the songs & guests that we liked on American Bandstand. We taped commentary, a la Danny Gallivan on Hockey Night in Canada, while our dads faced off on our friends tabletop hockey game. And we taped shows of our own -- singing along to my girlfriend's guitar music, telling silly jokes, and giggling. Lots & lots of giggling.

Years later, I was visiting one of the girls who had lived across the street, and lo & behold, she produced one of our old show tapes. We listened to our younger selves, absolutely killing ourselves laughing. (She made me a copy -- which I really should transfer to a digital format...) Her young daughter -- who had had a video camera pointed at her all her life -- was quite bemused by it all & wanted to know why she couldn't WATCH us. 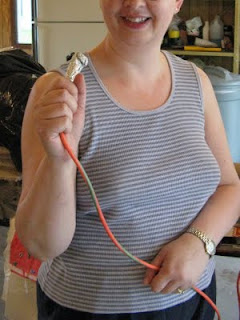 And this is me, doing my best Partridge Family imitation. (Truly, I do not always look this dorky -- even cropped -- and I debated about sharing this one, but I decided you needed to see it to understand what I was writing about.)

Long before karaoke machines, or Guitar Hero & Rock Band, my sister and our friends used to put Partridge Family, Archies & Osmonds albums on the record player and sing along, pretending we were the band. We decided that we needed microphones, and (real or even play microphones being either extremely rare &/or expensive in our part of the world at that time) we eventually found the ideal solution. We covered the handles of our skipping ropes with tinfoil & sang into those (they even had cords we could swish back & forth!!).

Believe it or not, I found a skipping rope, tin foil still covering the handle, coiled up inside of a round zippered doll's suitcase -- like the round suitcase Tracy Partridge used to carry in promotional photos. 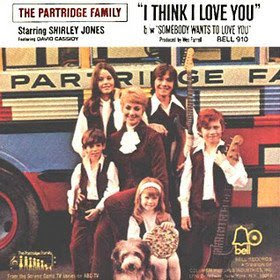 To see what others are showing & telling this week, hop over here.