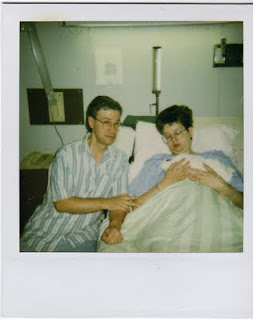 Eleven years ago today -- which was also a Wednesday -- the road I was travelling on -- toward the family we had waited so long for, we thought -- took another surprising turn. Six months pregnant, I went to my ob-gyn's for my monthly checkup, only to learn that my baby girl's heart had stopped beating.

Two days later, I went to the hospital to be induced, but learned I was already in labour. I delivered my tiny daughter -- our first and only child -- later that evening. The photo here is one of the six Polaroids (now scanned) the nurses took that night. (Combing my hair was obviously not a priority at that monent.)

I'm at home this week. The "anniversary" dates were one reason why I decided to extend my vacation for a third week, particularly when I realized the dates fell on Wednesday & Friday again. Some years, I am OK & hardly even cry at all. Other years, I'm not. The problem being that I never know exactly how I will feel until the day arrives. So if August 5th &/or 7th don't fall on a weekend, I will usually try to take at least one of those days off. (If it's not possible, I slog through as best I can.)

Last year, being that milestone 10 year mark, was very difficult. I retold the entire story of my pregnancy from start to finish on my blog in minute detail (you can find those posts under "1998 memories" in the "Labels" section in the sidebar at right), and felt like I was reliving it all as I wrote.

This year will be different, I think. (I hope.) It was actually a bit of a shock to return home from vacationing at my parents' & realize with a start, "Eeek, it's this week!" I knew it was coming, of course, but it kind of crept up on me -- especially being on vacation the past two weeks & having only a hazy idea of exactly what day it was.

I am actually heading out to lunch today with a friend/retired coworker -- whose birthday is also August 7th (and who is also childless, although she is a stepmother & grandmother via her ex-husband and current longtime partner). She's been a big support to me over the years when it comes to Katie, so if I want to talk about my daughter at all, I know she'll be up for it.

Friday after dh gets home from work, he & I will visit the cemetery with some pink roses, & then order in Chinese food for dinner, as is our tradition. And so long as I have some time on one of these two days to go through Katie's box of things & spend some "quality time" thinking about her, I think I will be OK. After all, she is with me, and I think of her (and miss her), every single day.

By most measures, I have a good life today, on this road less travelled. But I can't help but think and wonder about the life I might have had with my little girl, on the road that ended so abruptly in August 1998. :(
Posted by loribeth at 7:00 AM