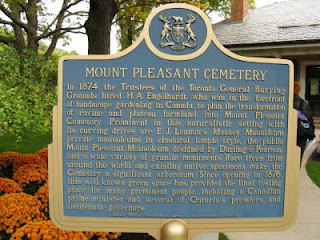 Tash had a recent post in which she talked about her grandmother's funeral and her fascination with cemeteries, particularly, these days, the graves of children.
Which reminded me of a story.
When dh & I were first married, we lived in a lowrise, NYC-style brownstone apartment building in midtown Toronto that backed onto Mount Pleasant Cemetery.
Mount Pleasant is one of the oldest, largest and most famous cemeteries in Toronto, if not all of Canada. It is huge, spanning both sides of a major thoroughfare (Mount Pleasant Road), full of big old trees, ornate monuments, and mausoleums for some of the city's most famous familes (the Masseys, the Eatons) that are as big as houses.
We lived very close to the monument to the Empress of Ireland, a ship which sank in the St. Lawrence River on May 29, 1914, two years after the Titanic sank off the coast of Newfoundland. 1,012 lives were lost, including 167 Canadian members of the Salvation Army who were travelling to London, England for a conference. A monument was erected in their memory, and every year on or around May 29, the Salvation Army holds a memorial service at the monument, which is not too far from the main gates on Yonge Street. We could hear the band playing "Abide With Me" through our open windows.
It is the perfect place to go for a long walk or bike ride, especially in the fall , when the leaves are turning colour, and dh & I loved to go walking there.
As an avid genealogist, I'm always keeping my eyes open for family names, and just off the side of the road one day, I spotted a tall white monument, inscribed with a name that's on my family tree -- the name of my great-grandmother's family, as well as the name of two men who married her husband's sisters (my grandfather's aunts). The story goes that the three were cousins, although we have yet to determine exactly how they're related. We do know that Hugh, the husband of my great-grandfather's oldest sister Elizabeth, was born & raised in Toronto, & from references in family letters we had copies of, we know that he had returned there to visit at least once if not more often.
There were about a dozen names inscribed on the monument -- including this one. The dates weren't very clear, but it seemed to be for a child:
FLORENCE MAUD (LASTNAME)
Daughter of
Hugh and Elizabeth
(LASTNAME)
Born Jan. (dates illegible)
Died Jan. (dates illegible)
(4 lines of poetry)
I pulled pen & paper out of my purse & copied down the inscriptions on the monument, thinking, "Well, you never know..."
Fast-forward to about two years ago when, thanks to the power of the Internet, I connected with a distant cousin, who is the great-granddaughter of my great-grandfather's sister Elizabeth & her husband Hugh (i.e., we share the same great-great grandparents). She had all kinds of information & photos we did not, including the first photos I had ever seen of my great-great grandparents. In fact, she had been in Toronto a few years earlier, researching Hugh's family. She told me that most of the members of his family were buried in Mount Pleasant Cemetery --plot with a big tall white marker.
Yep -- the marker I had noticed & copied the information from, "just in case," turned out to be the family of my great-grandfather's sister's husband (my grandfather's uncle by marriage).
AND, she told me -- Hugh & Elizabeth's daughter, Florence, was buried there, too. She died when she was a toddler, during a family visit to Toronto. When I met my cousin last summer in Minnesota, she showed me a funeral photo of little Florence, laid out on a couch in a white dress. She looked as if she were sleeping.
I had never heard of a daughter named Florence. My grandfather (bless him) had started off my family tree research by giving me the names of all his aunts, uncles & cousins (including where they had lived as adults, who they had married & what they did for a living -- and just about everything he told me has turned out to be accurate) -- but he had never mentioned a Florence who had died. Perhaps he did not know -- she died at the turn of the last century, 10 years before he was born in 1912.
I couldn't believe it. Here I had been living for the first five years of my marriage only a few hundred yards from the resting place of my grandfather's first cousin. I wished he were still alive so that I could tell him that. He would have been tickled.
I need to go back there someday & take some photos.
(Mount Pleasant is also the site of our support group's annual Walk to Remember every October -- albeit in the section on the other side of Mount Pleasant Road from Florence's grave. I took the photo above of the historical plaque outside the administration building just prior to last year's walk. I remembered blogging about the walk & went to look for the post. I found it here and realized I wrote about this same story then too. Oh well... if you missed it the first time around, here it is again!)
Posted by loribeth at 7:50 PM