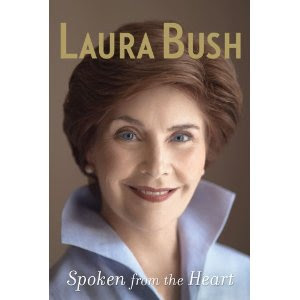 At the bookstore last week, I saw that former U.S. First Lady Laura Bush's memoir, Spoken From the Heart, was now on the shelves. I picked up a copy & started browsing through it. While I am no fan of her husband's, & especially his brand of politics, I have always rather liked her. She seemed to be a kinder, more common-sense counterweight to some of her husband's more radical words & actions, although it did seem like she held back a lot of her personal opinions, out of deference to her husband (& father-in-law's) position. (And we've been hearing some of those personal opinions on the talk show circuit over the past week or two.)

It seems like everyone is zeroing in on the details she has revealed about the car accident she had when she was 17, in which one of her schoolmates was killed. I was more interested in what, if anything, she would have to say about infertility.

I had read a long time ago about how she & George had started adoption proceedings when -- surprise!! -- she found herself pregnant with twins. It always seemed to me like there was more to that particular story than she was letting on.

And there was. She admits to "hormone treatments" prior to conceiving the twins, being on bedrest for much of her pregnancy, and having an emergency c-section when her blood pressure soared. She talks of her longing for more children.

Not only that, but Mrs. Bush is deeply familiar with the tragedy of pregnancy loss and the lingering impact it can have on the entire family: in the first few pages of the book, she writes in some detail about her mother's three lost pregnancies, which meant she grew up as an only child.

There are interviews & excerpts from the book in this month's Ladies Home Journal, as well as a lengthy book excerpt on Oprah.com (including sections about the twins' conception & birth).

"The English language lacks the words 'to mourn an absence.' For the loss of a parent, grandparent, spouse, child or friend we have all manner of words and phrases, some helpful, some not. Still, we are conditioned to say something, even if it is only 'I am sorry for your loss.' But for an absence, for someone who was never there at all, we are wordless to capture that particular emptiness. For those who deeply want children and are denied them, those missing babies hover like silent, ephemeral shadows over their lives. Who can describe the feel of a tiny hand that is never held?"

I haven't actually bought the book yet. I hear that, once they get to the White House, it devolves into a boring recitation of dinner menus and dresses worn. I may just wait for the paperback.

But it's nice to know that, even though she's never put herself forward as a champion for pregnancy loss or infertility issues (and more's the pity...), there's a former First Lady who deeply understands what these issues mean to millions of women, in the United States and elsewhere.
Posted by loribeth at 9:00 PM