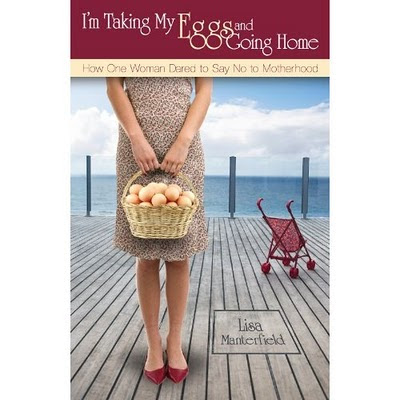 I think I found the blog Life Without Baby sometime last summer. As always, I love finding new blogs & websites aimed at women like me, who are trying to carve out a meaningful life after loss & infertility... and I quickly became a fan of Lisa Manterfield's keen and witty observations about childless living.

So I was happy to read this fall that she had written a book. It was the very first book that I downloaded to my brand-new Kobo e-reader (which I promptly lost -- & blogged about here!) & also ordered the book just as soon as it became available on Amazon.

"I'm Taking My Eggs and Going Home" is a welcome addition to the small but growing niche of infertility books written by & about women who wanted and planned to become mothers someday, but wound up taking a ride on the ALI merry-go-round -- & getting off without having grabbed the brass ring of motherhood.

Needless to say, I was predisposed to like this book from the start -- and it did not disappoint -- starting with the unforgettable, sassy title & whimsical cover photo. : )

As you might expect, even though I estimate she's a decade younger than me, I recognized a lot of myself in Lisa's story (although there were significant differences too). For example, Lisa describes how her mother used to use a needle swinging from a thread over a woman's bare palm to determine how many children she'd have, and how many of each gender. I had this done many times in my younger days & the result was always the same: two boys and a girl. Consistent, yes; correct, no. ; ) Reading about Jose's Latino family & their exuberant weddings reminded my of my own Italian husband (the spoiled firstborn male cousin on both sides of his family, & the only boy for several years) and in-laws.

After spending her 20s with a couple of Mr. Wrongs, moving to California, hitting her 30s and realizing her biological clock is ticking, Lisa's Mr. Right finally shows up. Jose had a vasectomy after producing two children (now adults) during his first marriage (a not uncommon scenario among many involuntarily childless women I've encountered over the years), but undergoes a successful reversal. Thus begins Lisa & Jose's journey to possible parenthood, which follows a path familiar to those of us who have struggled with infertility -- that is, it takes us to some pretty strange places where, gradually, we find ourselves doing things we never, ever thought we would do.

Lisa decides, after visiting a fertility clinic early in her journey, that IVF was not for her -- and, perhaps admirably, perhaps foolishly -- she sticks to her guns. (I never did IVF either.) But she tries everything else, from diet and yoga to accupuncture and Chinese medicine. As her dream of having a biological child begins to fade, she & Jose explore adoption and foster parenting. Ultimately, they decide these routes are not for them either.

I don't think I'm giving too much away if I say that the ending, where an emotional visit to a cemetery helps Lisa come to terms with her childlessness, had me reaching for the Kleenex. I enjoyed this book tremendously, and look forward to reading more from Lisa in the future.

For a slightly different take on this book, you can read reviews from Pamela (who wrote a kick-ass, award-winning book of her own about her personal journey to childfree living, Silent Sorority) & Lily.
Posted by loribeth at 9:21 PM