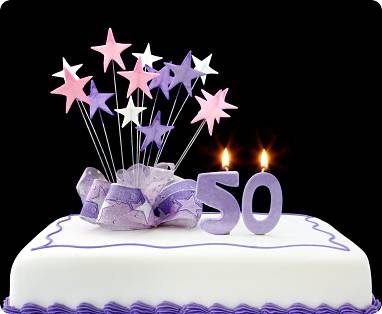 Well, it's here. Today is the day. My birthday. The big 5-0. I am officially, if not OLD, then definitely not young anymore. Middle aged, even. I have long-lived ancestors on all sides of my family, but even in the most optimistic scenario, I know my life is at least at the halfway point.

As my grandmother used to joke, when it came to getting older, "Well, it's better than the alternative..." And yes, I know, you're only as young or as old as you feel.

I remember my great-aunt, in her 80s, once saying solemnly to my mother, "You know, there's still a young person inside this old body." The older I get, the more I understand what she meant. There are days when I still feel like a teenager (especially when a song from the 70s comes on the radio, whisking me back in time). There are days when I don't feel a day older than I did in university -- my memories of that time (the best time of my life) are still so clear.

And then there are days (especially when I listen to a bunch of teenagers, or even the 20-somethings in my office, talking about technology or music that I know absolutely nothing about, or the bender they went on over the weekend -- or when my knees creak & I survey the age spots on my cheeks and the coarse grey hairs sprouting at my temples)(or -- horrors! -- on my CHIN!!) when I feel positively ancient.

My mother turned 70 this week. She said 70 doesn't bother her -- but having a daughter who is turning 50 -- well, that just doesn't seem possible.

Sometimes it doesn't seem possible to me either, Mom. Can it really be possible that I've been married 25+ years -- that my pregnancy was almost 13 years ago -- that we stopped fertility treatments almost 10 years ago -- that I graduated from university 27 years ago and high school (gulp) 32?

At the same time, though, I can't deny that I'm feeling a little excited about this birthday. It's a milestone, no doubt about it. The closer it got, the more I began to notice -- really notice -- how much everyone likes to joke & moan about aging. (It becomes more personal when you're the one doing the aging...!) I guess it's a reflection of the age-denying, youth-worshipping culture that we live in (never mind the fact that the first baby boomers started turning 65 this year, and that senior citizens will soon make up the majority of the population) that, whenever I bring up the fact that I'm turning 50, people immediately assume that I'm "having a hard time with it." When I'm really not sure that I am, entirely.

Yes, there's the vanity part of it, as detailed above, and the fear of becoming irrelevant (particularly as an older childless woman), of being left behind. On the fertility front, knowing that the end of my fertile years is nigh makes me sad... but, I must confess, also relieved. Yes, it's the end of a dream, of an important time in my life. This summer, it will be 10 years since we said goodbye to infertility treatments (even though I secretly hoped for that miracle pregnancy for several years afterward).

But, having made that decision, it will be kind of a relief to knowthat, once AF makes her final exit, that phase of my life will REALLY be over. Finis. (These days, every time Aunt Flo pays me a visit, I know her days are numbered -- yahoo!)

But there's also the beginning of new dreams and a new phase in my life -- new possibilities (counting down to retirement!) -- and that's kind of exciting. : )

I've been thinking about this upcoming milestone birthday a lot -- about what it means to be a 50-year-old woman right now. I guess I'm not alone -- I recently learned that my high school classmates are planning a reunion this summer. We graduated in 1979, 32 years ago, which may seem like an odd number -- but apprently, the theme is going to be "Class of '79 Turns 50" -- an en masse 50th birthday celebration. I only just learned about it, and haven't decided yet whether I'm going. I also remember reading awhile back that, while 1957 was the peak year for the baby boom in the United States, in Canada, it was 1961. So I have a lot of company. : )

I did some Googling recently on "women turning 50." And I found that, like me, a lot of women are approaching this birthday with more anticipation than fear.

For example, there was this article by Sara Thompson, who noted that many women shared her feelings about turning 50:


"What a surprise it was -- rather than anticipate my 50th birthday as a dreaded, 'over the hill' event, I actually feel like it gave me a new freedom; a freedom to not take so much so seriously. I don't mean to imply that I've become rude, insensitive or the like. I simply do not bother with many of the things I felt bothered about before and I laugh more....
"I realized that as we turn 50, we are catching a glimpse of our mortality and making a choice about how we want to feel and live the rest of our life. By now, we know what is important and what isn't, what needs to be taken to heart and when we can laugh unabashedly at ourselves and at each other."

I wrote a few posts ago about watching Ali MacGraw on Oprah, & how they were talking about aging, & how so many women (especially in Hollywood) resort to plastic surgery Oprah said, "Everyone is trying to hang onto what WAS, instead of being present for what IS." Hmmm. There's a lesson there. (And not just for women turning 50.)

I also picked up the latest Canadian edition of More magazine (aimed specifically at women over 40), with the wonderful actress Jane Lynch (another 50-year-old) on the cover. One of the cover lines read, "Happier at fifty than at forty? You're not alone!" The article inside talks about how studies have shown that, for most people, happiness can be graphed in a U form throughout our lifespan: so long as our health & relationships stay relatively stable, happiness levels, which bottom out in your 40s, start to rise again in your 50s.


While young adulthood is seemingly a time of endless possibilities, our choices narrow as we age, so that by our forties we realize we'll probably never become a CEO, give a thank-you speech at the Academy Awards or have a picture-perfect family life. In fact, where we are now may be as good as it gets -- which can look rather bleak compared with what we earlier envisioned. It takes time to readjust our view of ourselves, says [Carol] Graham [author of Happiness Around the World], but by our fifties, we're generally more accepting of our limitations. "I do think we go through some sort of reckoning as we realign our aspirations with reality," she says. "And as we get older, there's a happy-to-be-alive effect. We see that life is short, so we better start enjoying it."

So here's to the next 50 years (give or take a few). I am taking the day off work, and kicking off the celebrations by... getting my blood pressure checked, lol. (Appropriate, no? I hadn't had it checked in awhile & when I called, this was the first day offered. It kind of tickled my funny bone, so I said yes.) After I leave the dr's office, I am heading to the SPA for a few hours (as I did on my 40th birthday, 10 years ago). Facial, manicure & pedicure. And then some shopping. Followed by dinner with dh.