Awhile back, I mentioned that I had picked up Shania Twain's new memoir, From This Moment On. And while many of the books I buy just get added to my gargantuan to-read pile(s, plural), I actually read this one from cover to cover within the space of a few days.

I have a particular weakness for celebrity memoirs. Many of them are pretty fluffy -- but I must say, I thought this was a worthwhile read. I was a little irritated by the foreword, "Why Write Now?," in which Twain takes a full nine pages to explain why she has decided to write about her life at this point. Once she actually starts telling her story, however, you quickly get absorbed.

I knew the outlines -- that she had grown up poor in northern Ontario; that while barely out of her teens, she had set aside her dreams to take on a job as a cabaret singer at Deerhurst Resort near Huntsville in cottage country (where dh & I, incidentally, spent our 10th wedding anniversary, several years after Twain had performed there) to support her younger siblings after the untimely death of her parents in a road accident; and that she had recently split from her producer husband, Mutt Lange after finding out he was having an affair with her best friend -- and then, just this past Jan. 1st, married the ex-best friend's ex-husband (if you can follow that...!).

The fuller details were no less interesting than you would expect, & Twain pulls very few punches in describing the ups & downs of her life, particularly the details of her childhood. Even so, she is generous toward her late parents, whom she believes did the best they could with the considerable challenges life handed them. She is, however, fairly close-mouthed when it comes to discussing her marriage & her notoriously private ex-husband (perhaps in deference to her young son, to whom she dedicates the book).

The loss of her parents was, obviously, a tremendous blow -- but Twain is perhaps most reflective when writing about grief over the loss of her marriage. Just as many of us turn to writing -- blogging -- as release after loss, so does Twain:

"The act of writing helped me regain some badly needed perspective. When you're in the depths of despair -- over anything; it doesn't have to be a romantic breakup -- it's easy to lose sight of the fact that you weren't always in this much pain, and the time will come again when that crushing sensation in your chest finally lifts and the weight of feeling that maybe you're going crazy will dissolve. Grief is not a mental illness, even though while you're in the midst of it, it may very well feel that way." (p. 365)

"Even when life hits you like a Mack truck that's come out of nowhere, there is still a chance that you will survive, and although the road to recovery may be slow, long, and even permanent, this doesn't mean you can't enjoy the rest of your life and be happy again.

"Time is a healer, and it has moved me along through many difficult moments in my life because of the way it so ingeniously brings change along with it.... What I have gained from the generosity of time, though, is acceptance that so much was out of my control." (p. 397)

If you like Shania Twain, country music, or enjoy a good story about overcoming adversity, you will like this book. 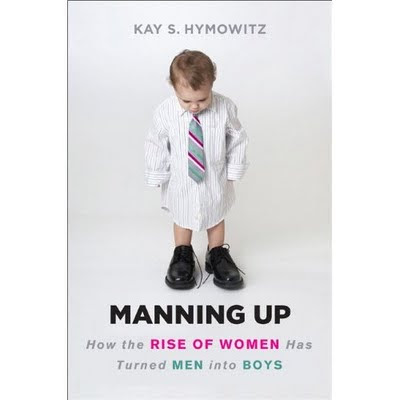 Another really interesting book I recently finished is Manning Up: How the Rise of Women Has Turned Men into Boys by Kay S. Hymowitz. Although I don't have kids myself, I'm still fascinated by parenting topics -- wondering whether I would have been able to cut it as a mom in today's "helicopter parenting" world. I've also been wondering whether it's just me, getting older (& grumpier), or "kids today" really are so much more different than when I was the same age.

Maybe yes, maybe no, but it's clear that kids today are growing up in a very different world than the one dh & I did. Hymowitz does a great job of outlining just how much things have changed, particularly in the world of work & the radical transformation in the kinds of jobs that exist today vs years ago (quite an eye opener, when you start to think about it). Her theory is that these changes have benefited girls & women, who have already been encouraged to realize their potential -- boys & men, not as much. She points out how the growing gap between the sexes is clearly illustrated by the characters played by Seth Rogen and Katherine Heigl in the movie "Knocked Up."

Contrary to some reactions I've read & heard about this book, I don't believe she judges, but simply presents her case & challenges us to think: is this good? is this bad? if so, what should we do to rectify the situation?

From an infertility perspective, I particularly appreciated Hymowitz's focus on what this new "pre-adult" phase of life means for marriage and parenting.

"...whatever their upsides, the truth is that later marriage and childbearing are in an uneasy standoff with human biology, culminating in an unintended set of medical, economic and social consequences, including more child-men, single mothers and fatherless hones." (p.176).

By and large, most people still want marriage and families, and Hymowitz points out (although perhaps not in these exact words) that women are wasting a lot of precious fertile years waiting around for the men in their life to grow up.

"While we have more control over our reproductive destiny, biology continues to organize life, at least for women. Biology writes a major part of the female script: you mature, meaning today you hit 30 or 35, and you reproduce -- or not. For men, biology in this sense is more lax, more ill-defined... Single motherhood only adds to the problem by creating its own negative feedback loop... Too many young men resist responsible, considered adulthood. Women give up on them and go it alone. As the single mother becomes a new (almost) normal, the cultural environment become increasingly indifferent to a guy in the house. The result? With nobody expecting anything of them, men get worse." (p. 186) 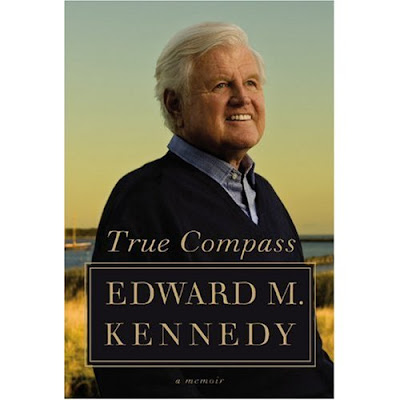 Right now, I am about 3/4 of the way through reading the late Senator Edward Kennedy's memoir, "True Compass." I bought the book when it first came out, read about 50 pages, got distracted & laid it aside (as I find myself doing far too often these days). I recently picked it up again, determined to finish it this time.

It's a good book. Of course, I have long been fascinated by the Kennedys, as I have written before on this blog. The family has known much tragedy & grief over the years, of course, and while I've read many books about them, "insider" glimpses like this one have been rare. Reading about one loss after the other from the Senator's perspective brings home to me anew what the family has been through. He writes about struggling to control his emotions, letting tears come only on solitary walks on the Cape Cod beaches he loved.

"It never occurred to me to seek professional help or grief counseling of any kind," he writes of the period following President Kennedy's assassination (p. 213). "The times were different then. But I prayed and I thought and I prayed some more."

I found this particular passage, describing the time in the late 1960s/early 1970s after his brother Bobby's death, particularly poignant (and something I could very much relate to myself):

"As I settled back into the Senate, into something like a state of equilibrium, I recognized that I had grown almost completely devoid of a state of mind that I'd taken for granted since my early childhood. That state of mind was joy.

"What amazing fun it had all once been. What adventures, what friendship and laughter and travels I had shared with my brothers and sisters. What a thrill I'd felt at mounting a wild bronco in Montana, or diving off a cliff in Monaco, or setting my sails into the teeth of a squall, or even facing off against old Wharton in the barracks at Fort Dix. What a lift to the spirit it had been, watching Jack and then Bobby soar into the stratosphere of world events, and to watch each of them accomplish mighty and good things; and the, incredibly, to join them on that plane standing with them to engage history, with laughter and good cigars and the pranks we still played on one another. No more." (p. 295)

If you enjoy reading about the Kennedys, the history of the last 50-60 years, or just enjoy a well-written memoir, give this one a try.
Posted by loribeth at 7:00 PM