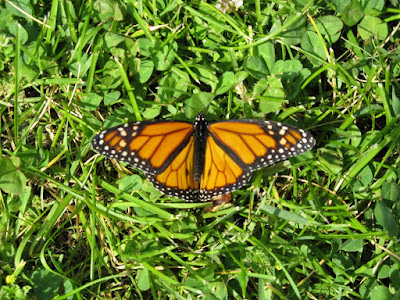 Another year, another picnic & memorial butterfly release, put on each year by the support group where dh & I were facilitators for 10 years. In the almost 13 years since we lost Katie, we've only missed one picnic -- the second year we were attending group. It began POURING rain just as we were getting ready to leave. Disappointed, we unpacked our bag & stayed home for the day. We later learned, to our chagrin, the weather at the picnic site had been overcast, but no rain. Lesson learned. We haven't missed a picnic since then.

Some years the weather has been chilly & other years sweltering. (This year, it was mostly overcast with a cool wind. But somehow, I still managed to get slightly sunburned on my neck & nose.) But no matter what the weather, there's always been warm hugs from dear friends, some of whom we only get to see once or twice a year at group events.

Over the years, many of the friends we've made through the group have drifted away. I'm still in touch with some of them, but we no longer see them at the picnic. And while there are still a few people we know we can always count on seeing there, the numbers get smaller each year. Some have other events to attend (birthday parties, bridal showers, etc.) that conflict with the picnic. Some have moved away, too far to attend for an afternoon (particularly when the weather is iffy). Children get older & no longer want to attend a picnic that's largely focused on kiddie entertainments such as pinatas, face painting and magic shows. It's summer, the weather is good and the family cottage beckons. Sometimes the families feel they have moved on and no longer "need" to attend in the same way they once did. Sometimes they haven't, and find it difficult to be around reminders of their loss, around other families' small children.

For dh & me, who don't have other children, & whose lives haven't changed in the same way that many of our friends' lives have changed over the years as their families have grown, it's been a little disappointing to watch people drift away. A sizeable number of our friends weren't there at all this year (& were sadly missed); several left shortly after we released our butterflies and, as the others began chasing after their kids, leaving us standing by ourselves amid a cluster of empty lawn chairs & picnic coolers, we decided it was time to leave too, even though we'd only been there two hours & there was still another 2-3 hours to go.

Still, it felt good to be there and to see the people who did show up. And to watch our butterflies flutter around the picnic area, each one representing a much-wanted baby, and many broken hearts. I don't foresee a day anytime soon that we will not be attending.