Confessions of a power pop princess 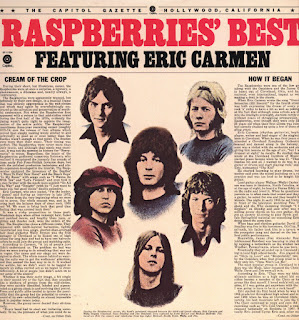 In a recent post, I mentioned spending Voldemort Day hiding out at the movies -- "Dark Shadows," with Johnny Depp.  The '70s music on the soundtrack (including Alice Cooper, Donovan & the Carpenters)(and off -- Johnny Depp recites lyrics from Steve Miller's "The Joker" -- really!!) was one of the best things about the movie -- and, at the very end, as the credits started to scroll, I let out an exclamation of delight as some familiar chords began. I recognized the song immediately as "Go All the Way," probably the biggest hit by a '70s band called the Raspberries -- although I quickly realized this wasn't the Raspberries (superior) version, but a remake by another band (which turned out to be the Killers).

The Raspberries' career was all too brief -- their first album was released in 1972 and by 1975, they had split up, acrimoniously -- and they didn't get a lot of respect at the time -- but they have maintained a cult following over the years, and today, they're considered by many to be among the all-time greatest power pop bands -- one of my favourite music genres. Their fans include Bruce Springsteen, and apparently there's a picture of John Lennon from the early 1970s wearing a Raspberries T-shirt. If you haven't heard of The Raspberries, you probably have heard their lead singer, Eric Carmen, in his later solo incarnation, or one of the many songs he has written that have been covered by other artists -- for example, Celine Dion ("All by Myself") or Shaun Cassidy ("That's Rock & Roll," "Hey Deanie").

I first remember hearing about the Raspberries when I was 11 or 12 in -- where else? -- the pages of Tiger Beat magazine. ; ) My interests at the time lay more in cover boys David Cassidy (Shaun's older stepbrother) and Donny Osmond ; ) -- but by high school, I owned the Raspberries greatest hits album (yes, vinyl -- the one pictured above), and later, Eric Carmen's "All by Myself" album. Then as now (influenced as I was, perhaps, by a childhood spent listening to the Beatles and other British Invasion groups), I was (& still am) a total sucker for a sharp, catchy guitar riff and tight harmonies.

Hadn't thought about them in a long time -- but the movie got me curious, and I Googled them the other night & found their website. After 30 years, the band reunited in 2004 for a one-off concert in their hometown of Cleveland -- which sold out in four minutes (!).  This led to a string of other concerts over the next few years,  including one at the House of Blues on Sunset Strip in LA, which was recorded & released as a live album. There is a media player on their website with cuts from that album as well as some of their old stuff, and also video clips. I've been watching & listening the last few nights.

The band members are obviously older & greyer now too (in their 60s) -- and so, of course, are their fans (present company included :p) -- but they still sound great.  (The first line of the first song, "I Wanna Be With You," is "If we were older, we wouldn't have to be worried tonight..." & in the video clip, Carmen sings it & then grins, obviously realizing the irony of the words.)

When I was younger, my friends & I used to snicker at Mick Jagger, who once famously proclaimed he would rather be dead than 40 and still singing "Satisfaction" -- and then continued doing so, well past 40. These days, he is pushing 70 and is STILL at it -- but I'm the one who has changed my tune.  If the Stones, the Raspberries, and other bands from the '60s & '70s still have the stamina & the chops to be doing what they did in their early 20s, & still doing it reasonably well, more power to them. It's great to see a great band not only get back together, but truly kick some butt while they are at it. ; ) I think of Bruce Springsteen, now 60+ and still doing knee slides across the stage; or the original lineup of one of my all-time favourite bands from my home province, the Guess Who, who reunited for the closing of the Pan Am Games in Winnipeg in 1999, and then toured together, still sounding fabulous.

Since rediscovering the Raspberries, I've been Googling & YouTubing other power pop bands from my younger years -- The Sweet, Cheap Trick (saw them twice), The Romantics, Joan Jett & Badfinger -- & I was playing albums (CDs) by The Bangles and The Knack while I was cleaning house this weekend, lol. ; ) I get kind of obsessive like that sometimes... something -- a song, a movie, a book -- piques my interest & I dive in & immerse myself in the subject for awhile. (This week, both Donna Summer & Robin Gibb of the Bee Gees passed away -- perhaps for my next post, I will wax nostalgic on my "Saturday Night Fever" phase, lol.)

I don't listen to music anywhere near as much as I once did. I'm not sure why. When I was a teenager, music wasn't as accessible as it is to kids today -- no iPods or even Walkmans back then (those came out when I was in university) -- but I seemed to be surrounded by music all the time. I would put a record on my parents' massive console stereo, plug in my (gargantuan) headphones & listen in as I did my homework -- or, if my parents were out of the house, turn up the volume & sing along. ; ) At night, I would lay in bed with my transistor radio by my side and earpiece in my ear, twisting the dial in search of my favourite songs or, on a clear night, stations from far-off places like Minneapolis and Chicago.

In part, it's probably because it's harder to find new music that I like today. I've actually learned to appreciate the music of my mother's generation (who'da thought??)(in fact, she, my sister & I are going to see Tony Bennett when I'm home later this summer...!)... and I adore Green Day, Adele and Nora Jones, to name a few... but a lot of today's music (rap, hiphop) leaves me cold.  The artists & genres that I once listened to don't seem to get played on the radio much these days -- which is why dh & I mainly listen to classic rock or other boomer-geared stations (dh is amazed by my ability to sing along to songs I haven't heard in 35 years), & wind up buying CD versions of the same albums &  we had on vinyl & cassette (or new stuff by those same artists). The old songs and singers take me back to a time when life was simpler (although maybe it didn't seem like it at the time -- being as typically overly dramatic as a teenaged girl can be) -- but every song was invested with meaning and potential, and every song was connected to a memory.

I can remember being at a Cheap Trick concert when I was about 17, at the height of their "Live at Budokan" fame.  Contact lenses had newly liberated me from my glasses, & after years of feeling like the proverbial ugly duckling, I was suddenly feeling like a swan. I can picture my outfit clearly:  a turquoise blue sleeveless blouse that tied up at the front, with turquoise blue earrings in the shape of little birds, a gift from my penpal in New Zealand. The area directly in front of the stage was crammed with people  (I suppose today they would call it a mosh pit?) & I managed to worm my way up to within a few feet of the stage. I found myself simultaneously carrying on flirtations with the extremely drunk teenaged boy standing next to me and the band's darkly handsome bass player, who at one point sang a song with the line "I know what I want and I know I can get it from you," while looking straight at me (at least, so it seemed to me).

Had he sent a roadie over with a backstage pass and an invitation to join him after the show, I would probably have passed out from shock -- then ran in the opposite direction, lol (and after all, my dad was waiting outside for me afterwards)(the eternal teenage excuse -- blame it on the parents...) -- but the thrill of (finally) being noticed, of exercising power over men, the promise of romance and more, of song lyrics coming true -- that was heady stuff.

And when I listen to those songs again, the music of my youth, I'm back there again, with all the endless promise of the future once again ahead of me.

Labels: getting older, growing up, music