No, the title isn't necessarily a comment on my public/private infertility status. ; )

I recently had some old negatives scanned, & came across some photos I took of my maternity wardrobe. These were taken in the fall of 2001 -- three years after the clothes had last been worn, not long after we made the decision not to return to fertility treatments, knowing they very likely would not be worn again.

I was newly enthralled with scrapbooking and finding new photo inspiration everywhere I turned. I had it my head to do a scrapbook for Katie (which is about as far as the idea has ever progressed....!). The lack of photos from my pregnancy bothered me -- still does. While people weren't taking pregnancy photos like they do today (never mind posting them on the Internet), I always thought I would keep a pregnancy journal, take some photos along the way.  I'm not sure why I didn't. I guess one reason is that I'm always the one behind the camera, taking photos of other people.  And perhaps on some level, I was trying to protect myself, not invest too much in this pregnancy. It seemed so tentative for so long (well, almost the entire pregnancy).

As a result, I have exactly two photos of myself pregnant -- one newly pregnant, holding congratulatory balloon bouquet; the other taken by our nephew at his birthday party, just a few days before I went for that fateful six-month ob-gyn appointment. (There is also a photo of me, a few weeks post-pregnancy, wearing one of my maternity T-shirts.)  It did occur to me that I needed to take some photos of myself pregnant -- but my parents were coming to visit in late August, & I planned to model some of my maternity clothes for my mom then, and have her take some photos she could show to my grandparents. The best laid plans...

After Katie's stillbirth, I was sad that I didn't have any photos of myself in my pretty maternity clothes. To put them on after the fact & pose for pictures, though, seemed weird and... well... fake. Not to mention too, too sad to even think about.

But one day, perhaps after reading something in a scrapbooking magazine, I had the brilliant idea of hanging up each item on the bedroom door & taking a photo of each outfit. And, since this blog has become a pregnancy scrapbook of sorts ; ) I have shared those photos below.

I bought most of my maternity clothes at Thyme Maternity at the local mall, and also a few items from Elegant Expectations, a small boutique near my office, where I went shopping with another pregnant coworker (who had a baby girl that October). I still have the receipts & tags from most of them. : )

I had a few more blouses that were loaned to me by another coworker. I returned them to her on my first day back at work, & so don't have any photos of them.

I work in a corporate environment (think Wall Street). Everyday business casual hadn't yet taken off, so I bought a lot of pants, blouses and dresses I could wear at work.

Fashions back then not quite as snug/revealing as they are today... (the term "baby bump" had not yet been coined -- thank God!!). A couple of the dresses were ones regular dresses that I just bought in an extra large size.

They're all still hanging in my closet. 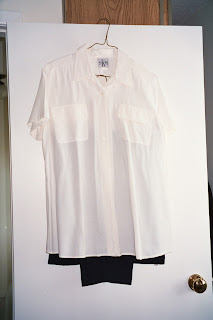 This ivory blouse was one of my first maternity purchases. There's a pair of black or navy maternity pants underneath. 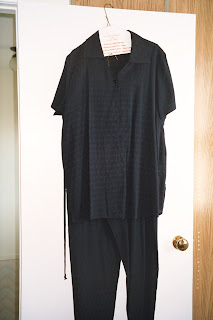 This was another one of my original purchases on that first trip to Thyme with my mom. I actually wound up not liking it very much. Navy silky fabric. I felt like I was in uniform, or maybe pajamas. :p 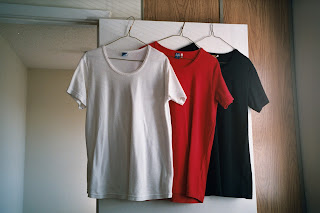 A couple of basic cotton T shirts that served me well. I had a couple of tank tops & a few pairs of shorts (not photographed) too. I used to wear the shorts around the house while cleaning, post-pregnancy. They were so comfortable! ; ) 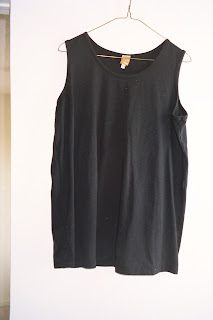 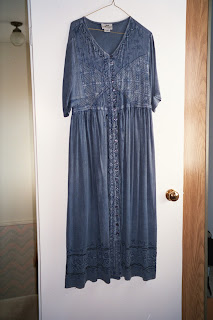 My mother bought this denim-look dress for me (extra-large size) at a flea market when she came out to visit me shortly after I announced my pregnancy. I wore it the day she & I went to see "Titanic." 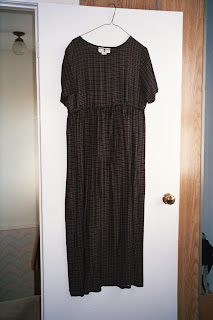 A long cotton dress, size XL, that I bought at Cotton Ginny (a now-defunct Canadian chain). Looked nice when worn with a blazer. 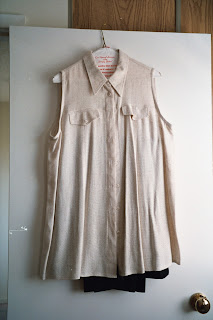 One of my favourite maternity blouses, with a pair of pants hanging underneath. Kind of a burlap-like fabric, oatmeal colour. 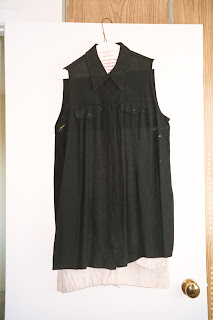 Same blouse, but in black, with tan pants hanging underneath. 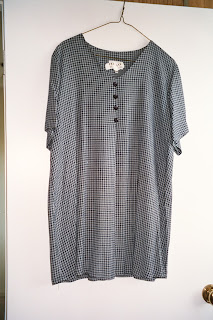 Navy plaid blouse -- got a lot of wear out of this, with navy pants. 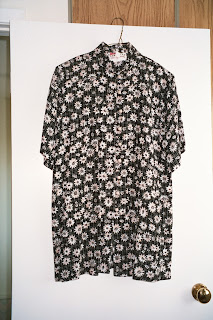 This blouse looks kind hideous here -- but it was actually quite pretty on me. It was probably one of my more expensive buys, from Elegant Expectations. Kind of a Chinese collar. 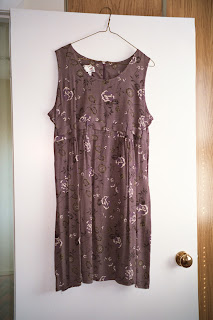 Loved this plum coloured dress;  wore it a lot to work, under a blazer. I planned to wear this to dh's cousin's engagement party in June, but it was so cold, I wound up wearing the oatmeal burlapy blouse with black pants & a black blazer. 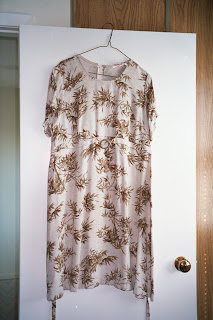 Another dress from Elegant Expectations. I really didn't need another dress, but I loved it and it was on sale. I thought I might wear it to my baby shower in September (which never took place). 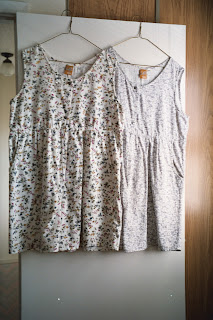 These two cotton twill floral print "onesies/rompers" were such fun to wear in the summer. I got a lot of use out of them. 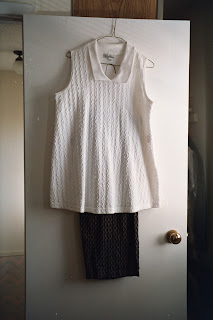 This is the outfit I wore for that fateful six-month appointment at Dr. Ob-gyn's. :( One of my favourites. The top was a rather thick, stretchy rib knit fabric. The pants were non-maternity wear, navy drawstring palazzo pants with tiny flowers on them that I bought in an extra-large size at Fairweather. I got a lot of wear out of them throughout my pregnancy, and I wore them for a long, long time after my pregnancy ended. They were soooo comfortable & cool to wear in the summer heat (& one of the few things I could wear after the pounds didn't drop off the way I had hoped. I finally had to throw them out when they developed holes in the inside thigh section, because they had worn so thin. 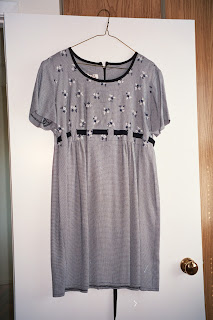 I wore this navy gingham dress to Katie's funeral. :(  ﻿