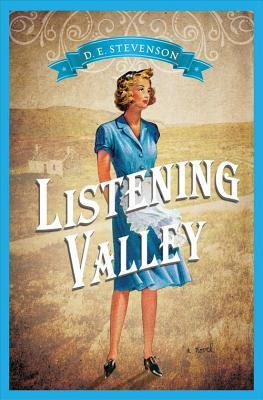 As the new year began, I started reading yet another novel by D.E. Stevenson (1892-1973), an author I first discovered and enjoyed as a teenager, and whose books are happily being reissued and discovered by a whole new generation of readers.

Listening Valley is the latest selection under discussion by my online Stevenson fan group. Part of the book takes place in the same setting as Celia's House and features some of the same characters, although it's not really a sequel. Still, to get the most out of "Listening Valley," I'd recommend reading "Celia's House" first.

Growing up in pre-WWII Edinburgh, shy, clumsy Tonia (short for Antonia) & her older, bolder sister Louise (Lou) live a sheltered life in the care of their Nannie, mostly neglected by their parents. Then Nannie retires, Lou gets married and Tonia is forced to "make friends with life" as the war begins to cast its shadows. Tragedy and a twist of fate bring Tonia from London, where she has begun to carve out a new life as an adult, to the Scottish countryside, where she makes new friends -- and encounters a special old one.

This book was published in 1944, while the Second World War was still being fought, and it's very much a book of its times. The ending ties up the loose plot ends nicely, but -- with the war still going on -- it's necessarily ambiguous.  It can't be a completely happy ending while the war is still being fought.  And I loved it for that.

As with most Stevenson novels, "Listening Valley" is a little old-fashioned -- the kind of novel you don't see much of these days -- warm and sweet. It can't really be pigeon-holed -- it's got a bit of romance, a bit of social commentary, a bit of a character study, a look at life on the home front during WWII (moss-gathering, anyone??), a bit of mystery... The plot changes directions several times (which is not always entirely satisfying, but keeps readers on their toes!).  It's about home, and family, and finding your place in the world.

As the cover blurb says, "This heartwarming novel is the literary equivalent of a comforting cup of cocoa on a cozy winter's evening." Don't try to analyze too much or to look at this (or any of Stevenson's novels) with a jaded modern eye -- just accept that this was written in a different time and place, take it from there, and enjoy. :)

I wrote about how I rediscovered Stevenson's books (which I first found, read & enjoyed hugely as a teenager) here.  Over the past year or so, I've read & reviewed five other recently reissued Stevenson novels, in conjunction with my online group: