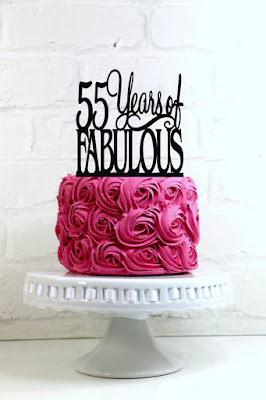 Another year, another birthday. :)  This is kind of a big one -- not generally considered a milestone -- at least, not these days -- but still, it's one that divisible by 5, and clearly an indicator that time is passing.

When I was a teenager/young adult, 55 wasn't necessarily OLD -- but the message was that if you were lucky -- if you worked hard and did the right things -- you could retire, early, and enjoy life while you were still relatively young and able to do so. In the 1980s, there was a hugely successful ad campaign for a Canadian life insurance company, built around the concept of "Freedom 55" -- which I wrote about in a post a couple of years ago when dh celebrated HIS 55th birthday. "Freedom 55" became both a well-recognized catchphrase and a seemingly reachable goal for Canadians of my generation to work towards.

Back then, many companies allowed employees to retire early on a full, unreduced pension at 55 (not my own company, unfortunately -- retirement at 55 is an option, but with a reduced pension).  Many companies also offered seniors discounts and other perqs to customers once they hit 55.

These days, however, the perqs have been pulled back to 60 & 65-year-olds, and it seems that defined benefit pension plans are going the way of the dodo bird. Fewer of my peers expect to retire at 55, instead making rueful jokes about "Freedom 70." I realize that dh & I are an increasing rarity -- and, yes, extremely lucky.

Upon hearing that we're both essentially retired, a lot of people comment to dh & me that, "wow, you're living the dream."  Well, yeah, maybe -- but to get to this point, we had to "live the nightmare" first -- infertility, stillbirth, job loss.  Dh & I were hoping to retire around the time I hit 55 anyway, but we didn't get to make that decision;  it was made for us (first for dh & then for me), a bit earlier than we had planned.

We feel very fortunate that things have worked out as well as they have to this point -- but I wonder whether people would want to trade places with us if they realized what it took to get here. As Janis Joplin once sang, "Freedom's just another word for nothing left to lose..." I suspect there are going to be further changes and life transitions ahead for us in the next couple of years too.  (Hopefully some positive ones, along with the ones we didn't expect or plan for.)