"He needs a cousin"

It's no secret that all of us are crazy about Oldest Nephew's adorable puppy.  :)  (Can I still call him a puppy, now that he's about 9 months old??).  Dh, BIL & SIL never grew up with pets, and find it hard to believe how head-over-heels they've fallen for the little guy. We all dote on him. Just as I took scads of photos of the nephews when they were growing up, I've been filling my Facebook & Instagram feeds with photos of the puppy over the past few months (in fact, he has his own album on my Facebook page, lol).  (One friend suggested that he needed his own Facebook account -- I said I'd leave that one to his parents...!)

Needless to say, along with all the comments about what a cutie he is (and he is!! lol), I've been getting plenty of subtle -- and not-so-subtle -- hints and questions about when dh & I are going to follow suit and get a dog of our own. The most recent example came earlier this week, when a dog-crazy friend commented on one of my puppy photos, "I think he needs a cousin!"

"Now where have I heard THIS before??"  I thought, rolling my eyes and biting my cybertongue before typing out a light-hearted response along the lines that Puppy seems to be enjoying having all the attention to himself, thankyouverymuch. ;)

"Well, what do you expect when you post all those photos?" Dh asked when I complained to him.  No doubt had social media been around when the nephews were growing up, I would have been sharing my photos of them there too... and no doubt that I would also have endured a crapload of nudge-nudge comments about how THEY needed a cousin, too. (I got enough of those IRL back then as it was...!)

Still, I have to laugh (ruefully). Even when it's clear that children are not part of your life and won't be in your future (for whatever reason), why is it that you then have to endure the same sorts of comments that you once endured about kids re: the lack of pets in your life??  Why is that people seem to think that childless couples -- and women in particular -- "need" SOMETHING -- a man, a baby, a pet?? -- to "complete" them?? Why am I, myself, never enough?

For the record, Puppy won't be getting a "cousin," now or anytime soon. (I'm hedging my bets and not saying "never," lol.)(But I'm pretty sure!)  I haven't changed my position since I wrote this post about pets (almost exactly four years ago).  Dh has softened his position since then (under Puppy's influence), and sometimes says it would be nice to have one of our own. But like me (and having just turned 60)(!), he's not THAT eager to give up the freedom we've come to take for granted during almost 32 years of childless marriage (and not quite three years of retirement together), and assume the responsibility that goes with pet ownership. As with babies, sometimes it's nice to cuddle and spoil a friend or relative's pet -- and then hand them back over and let someone else clean up the mess they inevitably make, lol. (The difference being that babies eventually do get toilet trained...!)

Some might argue that, since we're both retired now, we have more time to devote to a pet. Yes, we do -- but maybe (having freed ourselves of the responsibilities and stresses associated with work) we don't want to take on the responsibility for another living creature, particularly at this later stage of our lives?

And if we didn't have a dog when we had a huge backyard for him or her to romp around in, why would we buy one now, only to confine it to the 875 square feet of our condo, several floors up from the ground, with periodic leashed walks outside (in all kinds of weather) for exercise and bathroom purposes? I know many people in our building do have dogs -- we see them in the halls and on the elevators and on the grounds (and believe me, we hear them sometimes too...!) -- but I'm not entirely sure it's really fair to the dog. (Plus, I have seen what nephew's puppy, adorable as he is, has done to the floors of his apartment -- and he's in a basement with an easily accessible walkout to the backyard. ;)  Not eager to see the same thing happen to my lovely shiny new laminate!) 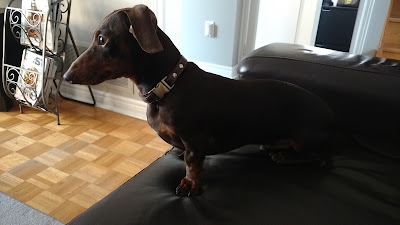