"Killers of the Flower Moon" by David Grann 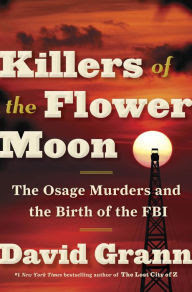 Around the same time that I finished David Grann's "The Lost City of Z" a few months ago (my review here), I heard the author had a new book coming out soon. I made a mental note to watch for it and bought it on sale shortly after its release last month. :)

I'm glad I did.  Entertainment Weekly has called it "the best book of the year so far," (and apparently a movie is already in the works). It's a gripping read, one that kept me up late several nights in a row, promising myself that I would read "just one more chapter..." before turning out the lights... ;)

"Killers of the Flower Moon: The Osage Murders and the Birth of the FBI" tackles a forgotten -- and extraordinarily shameful -- chapter in American history and the (mis)treatment of American Indians. After being driven off their home territory in Kansas (an event depicted in Laura Ingalls Wilder's "Little House on the Prairie") in the 1870s, the Osage Indians eventually settled on a reservation in a rocky area of northern Oklahoma. A few decades later, oil was discovered there, and by the early 1920s, the Osage were among the richest people in the world, living in mansions with white servants and sending their children to the finest private schools. The federal government, however, declared the Osage were not capable of handling their own affairs; white guardians were appointed to look after their fortunes and monitor their spending.

And then, one by one, the Osage began dying.

"This is a story that has real evil in it -- evil like I've never covered or ever experienced,"  Grann told "CBS Sunday Morning," which did a story about the Osage murders and the book a few weeks ago.

"When I began researching this story, I thought of it as a traditional mystery, a whodunnit," he said. "And by the end, I realized this wasn't a whodunnit, this was who-didn't-do-it, meaning so many people were part of this."

The book focuses on the story of one Osage woman, Mollie Burkhart, whose mother, three sisters and brother-in-law were all murdered or died under suspicious circumstances.  It also tells the story of the fledgling Federal Bureau of Investigation, and the agent -- Tom White, from a prominent family of Texas lawmen -- assigned by the bureau's young director, J. Edgar Hoover, to lead the investigation and track down the killer(s) -- many of them the very guardians who were assigned to protect Osage interests -- or others who stood to benefit.

The last part of the book jumps to present day, and Grann's own research for this book. The FBI estimated there were 24 Osage murders between 1921 and 1925 -- but Grann came to realize there were dozens and possibly hundreds more, beginning as early as 1918 and continuing into the 1930s, involving far more people than those who were tried & convicted.  He investigates some of these lesser-known cases and manages to pinpoint at least one likely murderer who was never publicly linked to the crimes.

Unfortunately, the exact number of Osage killed during the "Reign of Terror" (as they call it) will never be known, and most of these cases will never be solved. "The blood cries out from the ground," a current tribe member tells Grann, quoting the Bible in the last line of the book. Chilling.

I will be thinking about this book for a long time.