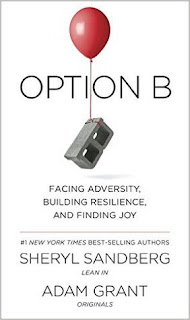 Four years ago, Sheryl Sandberg, the Chief Operating Officer of Facebook, published a book called "Lean In: Women, Work and the Will to Lead" (which I reviewed here). In the book, she lauded her husband, Dave Goldberg, for being a supportive husband and involved father, and one of her key messages to women was the importance of choosing a partner who would support them at home as well as with their professional goals.

Two years later, on May 1, 2015, Sandberg suddenly became a widow and the single mother of two young children, when Goldberg died suddenly at age 47, while they were on vacation with friends in Mexico.

Another two years has passed since Goldberg's death, and Sandberg, together with her friend Adam Grant, a professor at Wharton University, has written a new book drawing from her and her children's experiences with grief and loss, and how they have rebuilt their lives after this traumatic event.

I knew Sandberg's story and the basic premise of "Option B:  Facing Adversity, Building Resilience and Finding Joy." Still, I was still unprepared for the visceral reaction I had to the first few pages of this book. I started crying as Sandberg described finding her husband's lifeless body on the floor of the resort's gym -- the ambulance ride, how friends had to peel her away from the body at the hospital, the wails & screams from her young children when she told them their father was dead, and again at the cemetery for the burial. The raw emotions she described brought back memories of my own raw grief over the loss of our baby girl -- the wails from my mother when I made the most difficult telephone call of my life, my father's heaving shoulders at the cemetery -- and this was almost 19 years ago now...!

Nevertheless, I was glad to read "Option B" and to see such a well-known public figure address such a difficult issue with such openness and brutal honesty.

Like many of us who have experienced traumatic loss, Sandberg was convinced she would never feel joy in her life again. She begged her friends, especially those who had lost parents at a young age, to tell her that her children would be okay. Her friend Grant assured her that there were things she could do, steps they could take, to rebuild and recover. And they have.

Much like "Lean In," "Option B" blends Sandberg's personal story with stories from others she has met who have bounced back from traumatic loss and other challenging experiences.  Like "Lean In," every story is backed up by academic studies and data, all meticulously footnoted in an extensive appendix. (The sheer volume of stories and facts can be a little overwhelming to digest at times. It's not a long book -- 176 pages of text, plus footnotes & index, etc. -- but it took me a while to wade through it.)

I know some people have pointed out that Sandberg, with her wealth, position, understanding boss and other resources, is far better able to deal with adversity than most. (Since Goldberg's death, Facebook has revised its bereavement leave policies and other support mechanisms for its employees;  few other companies have yet to follow suit and offer more than the standard three-day paid bereavement leave.)  Sandberg herself admits this, and has acknowledged that she clearly was not thinking about the challenges faced by single mothers when she wrote "Lean In."

But death and grief are a great leveller -- they come to all of us, eventually, and no amount of money can shield us from it.  I believe Sandberg is sincere in her desire to use her experience -- and her public profile -- to help others and get people talking about grief, loss and adversity more openly. Much of what she has to say will be familiar to those of us who have walked a similar path -- but her words could be a lifeline for those who are newly bereaved. (It's also a good book for those who want to support struggling friends & family members in a more meaningful way.)  And most of the tips and strategies she & Grant offer in this book are things that anyone can try, that don't cost any money -- things like creating and posting a new set of "family rules," keeping a gratitude journal, finding a support group, and even just getting plenty of sleep.

I remember when Sandberg wrote her infamous Facebook post, 30 days after Goldberg's death, talking about what she'd learned about grief and loss, I wondered here on this blog whether 30 days was a little early to be making definitive "what I've learned" statements. Part of me similarly wonders whether less than two years is a little early to be making definitive pronouncements about what works and what doesn't when it comes to learning to live with loss. I would be curious to check in with Ms Sandberg in the years to come to see what, if anything, she would change or add to her book, as her relationship with grief (and that of her children) evolves.

In the end, I'll reiterate what I said then:  if Sandberg can get people talking about grief and loss issues with this book in the same way that "Lean In" fuelled new discussions about women and work-life balance, it can only be a good thing.

Sandberg is donating all proceeds from "Option B" to OptionB.org, a nonprofit initiative to help people build resilience and find meaning in the face of adversity.