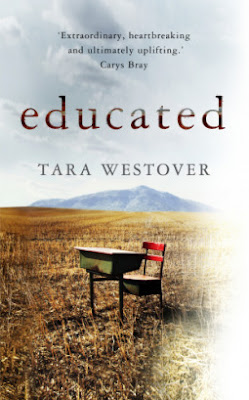 You all know that I love me a good memoir -- and I was intrigued when I saw "Educated" by Tara Westover at the local mega-bookstore on Saturday night.  I'd heard nothing about this book before then, but the blurb on the inside flap & praise on the back cover intrigued me (plus, it was on sale, lol), so I bought it.

While sometimes I dither when I buy a new book (do I want to get into this one now? should I read that other one first?), I dived right in.  By the time I went to bed a few hours later, I was almost 2/3 of the way through. I picked it up again yesterday afternoon and finished it later that evening. (I probably would have finished it sooner than I did, but we went to a movie on Sunday afternoon, and then it was time for the Oscars. ;)  )

Westover grew up on an isolated mountain property in southern Idaho, the youngest of seven children. Her family was Mormon, in a largely Mormon community -- but her father's bizarre beliefs about the Illuminati, the evils of government and the need to prepare for the imminent end of the world set her family apart from the mainstream. Guns, ammunition and gasoline tanks were stashed all over the property. Westover helped her mother can endless jars of peaches in preparation for the coming end times and (like all her siblings) slept with a "head for the hills" bag, ready to run from evil government agents at a moment's notice. She did not have a birth certificate, was not immunized, never saw a doctor and never attended school. Her education consisted mostly of reading texts by the Founding Fathers of the United States and Mormon prophets. She spent most of her younger years helping her mother (a midwife and homeopathic healer) deliver babies (ALI note & caveat: there are some disturbing stories about semi-disastrous deliveries and prematurely born infants) and brew up essential oils and herbal remedies.

Later, as a teenager, she worked with her brothers in her father's junkyard.  Scant attention was paid to workplace safety, and many of the Westovers (including Tara herself) endured some horrific injuries and accidents as a result (which were ultimately chalked up to "God's will" and tended to by her mother).  As she grew older, her father became increasingly radical in his beliefs (and likely mentally ill), while one of her brothers grew increasingly violent -- towards Tara, as well as others. Her parents made excuses for him and tried to convince Tara that it was all in her imagination.

Encouraged by one of her other brothers, Westover taught herself enough to pass the ACT (a standardized college admissions test, similar to the SAT) and was accepted to Brigham Young University in Utah when she was just 17. To say she was unprepared for the challenges she would face there -- academic and otherwise -- is an understatement.  (Prime example: She stunned her professor and classmates when she asked what the word "Holocaust" meant.)  Gradually, she found her academic groove ("read the textbook" turned out to be excellent advice).  Her hunger to learn and to explore the world took her from BYU to Cambridge, Harvard, and back to Cambridge again, where she eventually earned her PhD in history.

Inevitably, Westover's education and growing sense of self drove a wedge between her and her family.  She began to ask herself: what do we owe to our families? to society? What do we owe to ourselves? And what do we do when those obligations come into conflict with each other?  (These questions ultimately formed the basis of her PhD thesis, as well as this book.)

I gave this book five stars on Goodreads. It was intense and powerful, at times disturbing, and beautifully written. Ultimately, it was a testament to the resilience of the human spirit.

I will be thinking about it for a long, long time.