"The Keeper of Lost Things" by Ruth Hogan 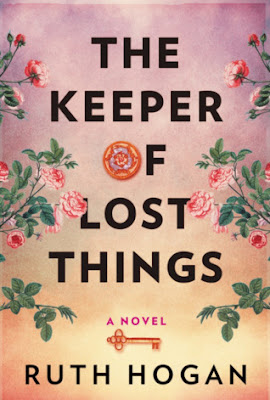 "The Keeper of Lost Things" by Ruth Hogan is this month's book club selection (the very first book club selection, actually!) for the Gateway Women private community I recently became part of. Jody Day will be leading a live chat about the book for community members this coming weekend. (Main criteria for GW book club selections:  no miracle babies! lol)  It's not a book I would likely have picked up otherwise... for one thing, I'd never heard of it or Hogan before this, even though it was well reviewed and was nominated for a Goodreads Choice Award for Best Fiction in 2017.

(I Googled Hogan while writing this review. Would you believe we share the EXACT SAME BIRTHDATE?? -- day, month & year!)

"The Keeper of Lost Things" is a multi-pronged story. There is Laura, a divorced, childless, middle-aged woman who has lost her purpose in life -- until she becomes the assistant of writer Anthony Peardew. Anthony lost his beloved fiancee, Therese, 40 years earlier -- as well as an important keepsake she'd entrusted to him. Since then, as a form of atonement, he's made it his life's work to collect all kinds of lost things, in the hope of eventually reuniting them with their owners. And, in the process of carrying on Anthony's mission to find where the lost things belong, Laura winds up finding herself.

Interwoven with the story of Laura & Anthony, there's also the story of Eunice, assistant to publisher Bomber, and how their relationship unfolds over a period of some 40 years.  And then there's Anthony's stories about the lost things themselves -- which may or may not be true. The book bounces around among these three threads, eventually bringing them all together. (And as if that's not enough, there's a bit of the supernatural thrown in for good measure too...)

This was a warm, rather quirky/whimsical story, with underlying themes of grief and loss, and some lovely writing.  I enjoyed it overall -- but it did meander a bit, and it took a while to start making the connections between the various threads and figuring out what was going on. Best enjoyed with "the lovely cup of tea" (a catchphrase from one of the book's characters :)  ).

Three stars on Goodreads (three & a half, if I could give half stars).