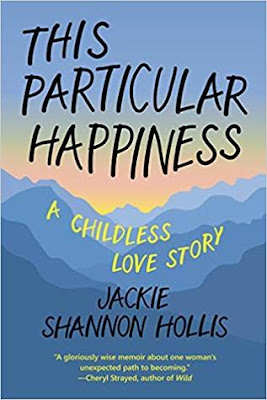 As Gateway Women founder Jody Day has said, "the room called childlessness has many doors." Some (like me) are childless because of infertility &/or pregnancy loss.  Some women never find the right man to have babies with before their fertile years are over.

And some are what blogger Sue Fagalde Lick calls "Childless by Marriage." They marry a man who doesn't want children. Perhaps their husband initially said yes to kids, but changed his mind after the marriage. Perhaps he already has children from another relationship(s), and doesn't want any more. Perhaps the woman didn't think she wanted wanted children either, but changed her mind. In these cases, a decision must be made: whether to stay in the marriage (which is often otherwise good), or leave and try to find another partner to try to have a child with while still fertile.

"This Particular Happiness: A Childless Love Story" by Jackie Shannon Hollis is a memoir that falls into the "childless by marriage" category.  Jackie's husband Bill was clear from the beginning of their relationship that he did not want children. Jackie didn't think she wanted children either -- until the day she held her newborn niece and was suddenly overcome with a raging case of baby fever.

The book spans Jackie's life, from childhood to the present, going back & forth in time to tell her story. It's about coming to terms with childlessness. It's about relationships -- with friends and family members, as well as partners -- and about building a satisfying and fulfilling life -- even when that life doesn't go exactly the way we had hoped or planned.

My own route/door to that room called childlessness was very different from Jackie's, but there were many things in this book I could relate to. Jackie is just a few years older than me -- we grew up in the same era, and absorbed similar attitudes about what women's lives could be like. While I never lived on a farm, I could relate to Jackie's upbringing in a small, rural community. |We are both very proud aunties -- albeit dh & I have just two nephews, versus Bill & Jackie's 40+!! nieces & nephews together (including inlaws & "greats").

I could relate to this passage (which I marked with a sticky note), in which Jackie hosts a baby shower for Bill's unmarried 20-year-old niece:


"I can't wait to hold her," Christy said when she announced the baby would be a girl. "I love babies. I've always loved babies."

"So have I," I thought. But her strong desire to have a child overpowered any worries that might stop her. Worries about not being with the father, or what she would need to care for a baby, or how she could afford it. This stunned me. How different we were. I'd always had reasons and worries to balance my wanting.

I could also relate to Jackie's struggles with trying to win and keep her family's approval (particularly her mother's). I did not have as many boyfriends as Jackie did in her youth ;) but I recognized something of myself in her yearning for love and acceptance. I winced when I read about how she hung around her ex-boyfriend's apartment, begging him to explain why he didn't want to be with her anymore. (I'm embarrassed to recall that when my pre-dh college boyfriend broke up with me, I went through a period when I would just show up at his apartment -- "I just happened to be in the neighbourhood..." (often he wasn't home and his bemused roommates had to deal with me) -- and lurk around the building on campus where he had classes, hoping to run into him.)

As I await the arrival of our first great-nephew, this struck a chord with me (from the closing chapter):

She buys baby gifts for her soon-to-be grandchildren and helps paint and set up the babies' rooms. I help some of the time. I buy gifts too. But I'm careful my gifts aren't too many, my offers to help aren't filled with my own needs...

Wanting something deeply leaves traces, grooves for regret to grab hold of, even when the wanting is gone.

I loved the closing chapter, and Jackie's reflections on being childless in her 50s.  Excerpt:


Women who are grandmothers say, "It's the best. You have no idea." I don't think they mean it literally. They forget that I truly have no idea what it's like to be a grandmother, and I never will. They're caught up in their own joy. I try to stay caught up in mine.

They say, "I get all the fun of having the grandkids and none of the drudgery." This part I know. It's the joy I've had all along...

This book was beautifully and honestly written.  It's a moving portrait of coming to terms with a childless life. Overall, it's a great read.

We will be discussing this book later this month -- with the author participating -- in Gateway Women's private online community. (GW founder Jody Day wrote the book's foreword.)